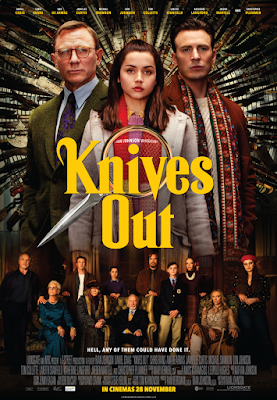 A detective, Benoit Blanc (Daniel Craig) is hired for an assumed suicide, and slowly he unveils that everyone in the family of the deceased had motive to kill him, and perhaps it is not a suicide at all. 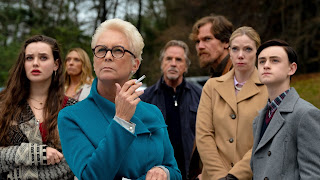 Before I head into the review, let me just say that Rian Johnson is an exceptional director. I loved his Star Wars movie and I am super excited about all of the projects he will head in the future because I was not disappointed yet. At this point you have heard hours of praise for this movie, and I am sure you have seen it yourself. But I decided to talk about it again because I just want to put out there that there are very few movies that have such a star studded cast and are actually good films. This is part of the very few exceptions. Each actor showed a side of them I had never seen before, and the casting director deserves all the praise, as every character had wonderful chemistry with anyone they shared the screen with. You can tell that they had a well made ready script before they started to get the actors, because what made it a perfect story with a beginning-middle and an end, was that they did not rely on the stars to patch up any plotholes or forgotten stories. At a time when even murder mysteries resort to remakes of classics that we all know the ending of - at least my generations and the ones older than that - it was a breathe of fresh air to have a story that surprised me so much.
Watch it? If it isn't on one of your watchlists already, then you are a fool. Perfect for next Halloween, as it is a cold, autumn going into winter movie, with a scary old house and a murder mystery on our hands. And Daniel Craig delivers a perfomance I have never seen from him before. Truly marvelous.
Until the next item on my list!
Bejegyezte: CsorEsz91 dátum: 2:48 AM