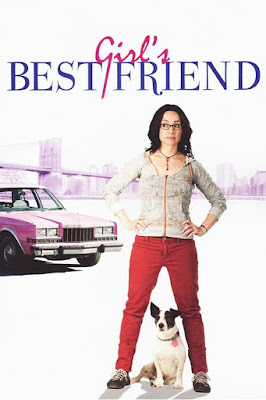 Mary (Janeane Garofalo) is a music critic, who after a failed marriage, closed herself off, and now dating a musician is scared to not like his music. Her mom moves closer to her and her sister for health reasons, and she asks Mary to drive Binky, her dog, across the country, so he does not have to fly. Despite not wanting to do it, Mary bonds with the dog over the trip and slowly moves on from her previous pain enough to truly open up to the great guy she started to date. Her mom never gets back Binky!

I watched this movie years ago, but it stuck with me for a couple of reasons. First of all, Janeane Garofalo is just wonderful in this role. She plays cynical and introverted characters very well, and I found it endearing that she opened up to the dog. She had somewhat lost faith in both herself and other humans as well, and having another creature that she was responsible for did help her change her attitude in a big way. Second, I also liked the genuine progression of her character and story. She was over her ex-husband, but actually facing him was the final thing that reassured her of her feelings. All along there was this underlying idea that she was not over her marriage and that is why she could not open up to her new boyfriend. In fact, she wanted to open up to him even more. Third is my absolute favorite scene in the whole movie, is after Mary goes to her ex-husband's wedding, as he invited her out of politeness, and she hears that the couple's first dance is to the song "Escape (The Piña Colada Song)" by Rupert Holmes. In the scene afterwards she is explaining to the dog that this song is about cheating. It is fun not just because she points out what a horrible choice it is, but it also brings in the fact that she is a music critic, and thus knows her way around a playlist. Her outburst to the dog, which leaved her laughing too, is one of the most endearing scenes I had seen in a long time. You feel like you are there with them and you laugh at the absurdity of the situation.
Watch it? It is a delightful movie, simple plot, but great actors and quite emotional at times. You understand Mary's struggle, and you root for her to figure things out with her boyfriend. Her commitment issues are no surprise, and learning to care for someone other than her opens a new chapter in her life. If you can get your hands on it, make sure you do!
Until the next item on my list!
Bejegyezte: CsorEsz91 dátum: 5:00 PM