Along with a series of old favorites, I am also trying to keep up with new things coming out. Well, this is going to be one of those rage entries that, is put on paper because somebody has to say out loud if a movie should not exist under any circumstance. So here we go: 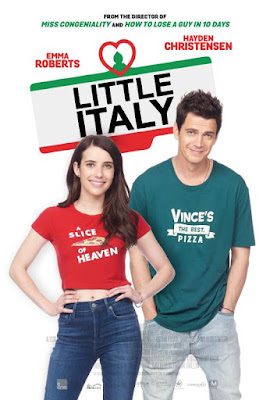 Nikki (Emma Roberts) goes back to her old neighborhood before moving away for good to work for the chef she trained under. Once home, she meets her childhood best friend Leo (Hayden Christensen) and the two connect, despite their families fighting over who has the best pizza place in the street. Whether or not they are allowed to be together, is up to them.

OK, I hated this movie with every fiber in me. I am not even going to try to be nice to it. First of all, it is a Romeo & Juliet adaptation, of course, except the two grandparents who find each other shared more chemistry on screen (even in the terrible product placement Starbucks scene, of which one was just not enough...), than the main characters. Second, who died Hayden Christensen's hair? Just fire that person retrospectively, because why was that necessary?! Three, how did this movie manage to offend Italian-Americans, British people, Asian minorities and gays within the same 90 minutes is outstanding to me. This should be called "Stereotypes: the movie". Nobody is allowed any growth as characters, nobody learns their lesson, nobody gets from A to B. There is only one single attempt at a character showcasing any kind of positive change, when Leo's friend Luigi reveals that he thinks of himself as Italian because his family did not want him when he came out as gay. And I felt that scene to be very strong, and I did not think the movie was going to allow for any depth (besides the importance of pizza!!!!!), and it seemed that we are finally getting somewhere, but then 1, Luigi gropes his best friend... and 2, he also falls in love with the only one other OBVIOUSLY gay character thrown in at the end of the movie and just... JUST DO BETTER MOVIE, YOU ARE BETTER THAN THIS. 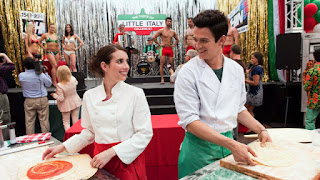 I did not care if these two were going to become a couple, because they forgot to show us why I should care. They did not give a shit, about the feud among their parents, they were completely untouched by the events unfolding around them, again, the grandparents showcased more emotions in fewer scenes, and the outcome was the dumbest twist in the history of movies... I just don't understand how this movie happened. Of the most disturbing scenes, the worst was one police officer, who started to literally grope Leo in the middle of the street, as a sign of assurance to the fact that apparently if it is men who are sexually objectified and assaulted, than it is "ha-ha" for some reason. Yes, we get it, everyone in the neighborhood is in love with Leo, show that in some other way than by physical assault by a person of authority.

Watch it? NO. I had to, because I am writing my dissertation on the representation of Italian-Americans in Hollywood, and this is literally what we call "research", but I wished this movie had never seen the light of day, especially because I love every actor in it and they deserve better, than whatever paycheck they got for this offensive piece of shit. And before you tell me that I am biased, I am really not. I decided to go into it with an open mind, but I was let down even more than I thought I would after the trailer. How can a movie like this happen in 2018... just do better Hollywood, do effing better.

Until the next item on my list!
Bejegyezte: CsorEsz91 dátum: 9:13 AM