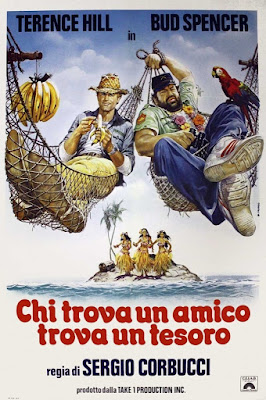 Alan (Terence Hill) and Charlie (Bud Spencer) find themselves unwillingly on a sail boat, and after a small fight, they fall in the sea and end up on an island that is supposed to hold a big treasure. There, they only find fake bills, millions of them, and an old Japanese soldier believing that he needs to defeat the Americans. The island is also raided by pirates and the men that Alan owes money to, so he and Charlie join forces to save the inhabitants of the island and help them hide from everyone else. 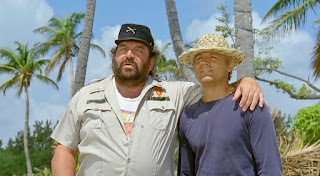 As most 90s kids living either in Hungary or Italy (yes, in that order), you will have watched countless times all the Bud Spencer and Terence Hill movies available out there. I do not know if the distributor made a deal that these have to be shown all over again, or they were so cheap copyright-wise that it made sense to have them be on TV whenever programming needed to be filled with something. Nonetheless, even if I had seen them three thousand times, I still love them very much. And when you move out of your parents' home, and you no longer own a TV, you end up even forgetting about them, but not for long. This year I decided to re-watch my favorite of all the classics, because since last time I saw it, I had a history class that talked specifically about how a lot of Japanese soldiers were forgotten on islands following the Second World War, not knowing that indeed the fighting had ended. This is of course a silly movie, a work of fiction, but I love how it nods to a reality that might actually be unknown to many, I know it was to me prior to my history class. But afterwards I could appreciate this story even more!

Watch it? Well, it would be weirder if you had not seen it yet. This is one of those movies that you remember even if you have never seen it from beginning to end. All of these movies I think mix in together at one point in our lives. I do think that because of the seemingly deserted island, this has a tropical summer feel to it that no other movie of the duo has.

Until the next item on my list!
Bejegyezte: CsorEsz91 dátum: 5:52 AM