This November a movie came out, which was based on a book by Maureen Johnson, John Green, and Lauren Myracle. The book was released in 2008, October, and since has been subject to the idea of various adaptations but not much came of it, as you might have suspected. This year it was Netflix that decided to adapt it, and I watched it straight away. I put off writing about it because I wanted to read the book first, but here we are. 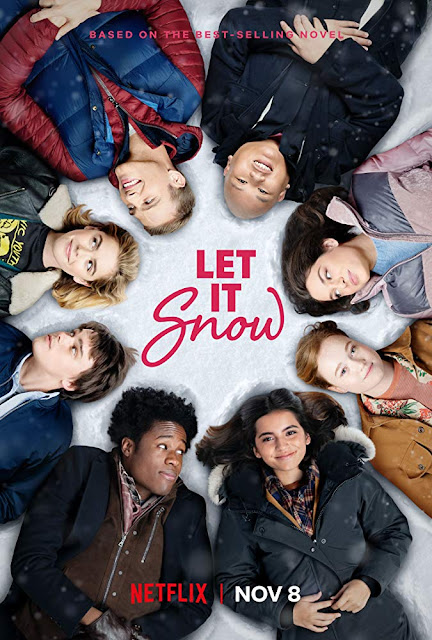 The teenagers of Gracetown come together on an adventurous Christmas Eve, at the only Waffle House in their little town, after having a holiday season they will never forget. The night ends in confrontation among enemies, of their feelings, and of their biggest fears. 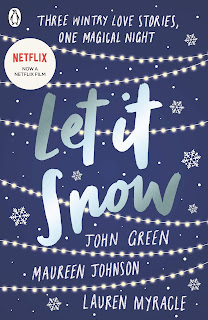 Let us talk about the book first. I have decided to read it after the movie came out because I have been going through a bit of a reader's block, and it was actual a John Green novel that helped me through that transition and I thought, hey, it is Christmas after all, perhaps this book will help. I am not really used to reading stories about the holiday season, I don't really have a specific reason as to why not, but I do love romantic movies and stupid stupid holiday romance Hallmark and ABC movies. I do believe that seeing the snow and the tree is something I require WHILE I am wrapping presents or crafting. As you might have guessed: it is quite hard to read a book while I am wrapping presents (and I am speaking from experience!). So even if generally I do not seek out romance stories, I did however want to read this one, because one thing became blatantly clear from the movie: these are very well crafted characters. I actually love a story that is not about a one dimensional character that goes nowhere fast... I never got romance novels where you don't understand why someone would care for that someone else once they find out about their lack of personality. The forced romance doesn't really do it for me... but what does is seeing characters that are actually as complicated as people are in real life. Just a couple of days ago I wrote about Nora Ephron, one of my favorite people, and she said: "I try to write parts for women that are as complicated and interesting as women actually are". I do find that when it comes to John Green novels, that is very true for teenagers: they are much more interesting than the raging hormonal mess that young adult movies and TV shows make them out to be. What was genius about this book was that I read three short stories, where each conveyed more personality for the main character than sometimes a 600 page book would. And the adaptation made sure to take that with it when it was re-written as a script, but... that is pretty much the only thing it did... 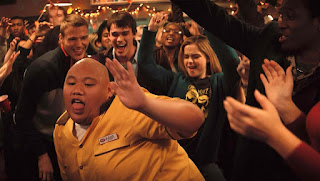 First off, I would like to delete from the poster that it is based on the best-selling novel, I would rather use the word "inspired by", because I understand that changes had to be made, as these three stories happened separately in the book, but actually at the same time as well, and the movie wanted to showcase that. Nonetheless, despite the names of the main characters I have found about 10 percent that is the same as the book and well... I don't care. This is a terrible adaptation and an incredibly wonderful movie, as weird as that sounds. I feel like I got two great Christmas stories that have little to nothing to do with each other, so I was still awarded for reading the book and for having seen the film. I would actually ask the opinion of what the authors thought of it, but I am sure it was great publicity for their book again, I guess that they did not mind overall. And here is the most important nugget of information: although you can see that this movie was influenced by the holiday mandatory Christmas romance movies that all end with a happy ending, this one STILL has the complex and interesting characters. Not to shit on Netflix Christmas movies, but they are short of horrible...

Watch it? Definitely. Snow does have an effect on people, and I don't know who decided to give Joan Cusack the narrator and over-arching character who kind of bring everyone together, but they deserve an award. I just love this actress so much, and the movie already had major talent with the young actors it collected, but she was just the cherry on top of the cake. I do think that everyone should see it! And, after, read the book and let it take you with it, because it is a beautiful snow-filled adventure.