What's Next On My List? Atlantis: The Lost Empire

Having talked about all of these Disney cartoons that were simply underrated, I felt the need to include one of my favorites. 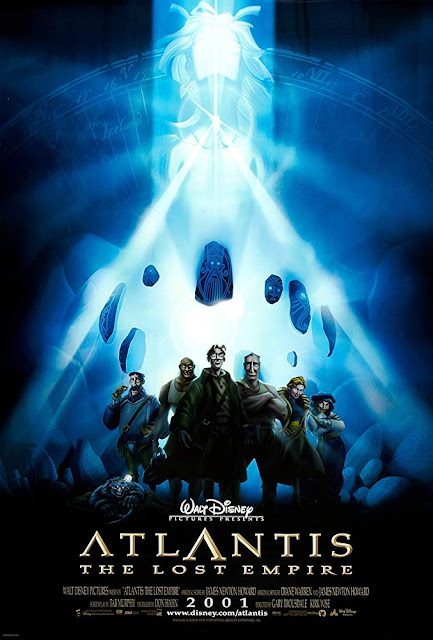 Milo is recruited by an old explorer to go with him on one last mission: that of discovering Atlantis. Milo possess part of a map, but the missing piece is the reason he could not venture out, nor did he have the funds. This old explorer not only gives him the rest of the map, but also a team that can help him see if there is indeed an empire lost under the sea. Once having reached their destination, the uncover a lot more than they bargained for.

I got this movie on VHS one summer, I think even a whole year after it actually came out, and I think I watched it back to back at least seven times in a row. I do think that I was fascinated by the nerdy guy getting the hottest girl. Not to mention that she isn't on of those princesses that needs saving... and ultimately, when you really look closer, Milo is only a hero at heart, but he is not physically superior to anyone, nor does he want to be. He is meant to be the brains of this operation and he remains just that. It is the side characters that step up and say out loud that there is a certain moral code they are not willing to step over. And when you think about it, this is not a kids movie... so far I have found that only those among my best friends who also have old souls in their bodies find this to be one of their favorites. There is lying, betrayal, the killing of a pensioner essentially, and well, magic, but the kind you really want to believe in. The general Disney message of: power creates monsters is still there, but there is so much more darkness surrounding it that I remember being scared. And if your child is scared, it is not a good experience for you either as a parent. Honestly, when it comes to how well an animated cartoon meant for a younger audience does at the box office, it is all about the person who has the money in the house, not the child... Another reason why all of this cartoons have adult jokes embedded as well. But being for a more mature audience does not make it any less of a great movie about a breathtaking adventure that makes you want to pack your bag and discover the world for yourself.

Watch it? I do believe this deserves a serious live action remake, and make it for adults. Just go nuts with it, dare to make it for a much older audience, and let us see where it lands. I do think I was too young when I saw it, but you see the main character and you love him and you feel his anger, disappointment, and being powerless in the face of evil. It is worth a re-visit if you haven't gotten around to it in a while.