About three years ago I decided to write about Richard Nixon's relationship with the media and I did so because this movie inspired me to dig deeper, as deep as I could. My approach was from the side of the media, and despite the fictitious dramatic elements in this movie, the real life elements kept making me wish to discover as much as possible about this man. Looking at the president today... I would say that people were pretty hard on Nixon for what he did and how he did, because, at the same time, it hurts to see that nothing really has any consequence anymore in this world. Nonetheless, let's talk about the movie. 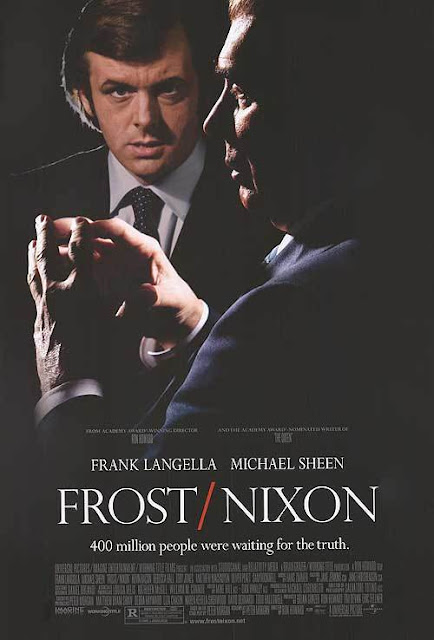 It is the story behind the interview series between the Australian TV host David Frost and the resigned president Richard Nixon. The story shows us the side of David, how he decided to set up the interview, paid for it from his own pocket, the research team behind it and finally how he got Nixon to confess to knowing about Watergate all along. 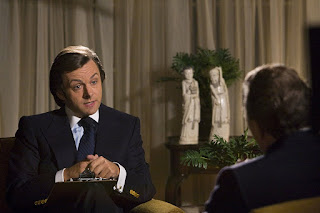 I was mesmerized by this movie. Prior to this movie all the information I ever got about Nixon was through a popular culture spectrum of jokes from the 90s. What is wonderful about this movie is that it made me care... I mean, I wanted to know more. A simple Ron Howard movie got be so hooked on US history that I ended up writing over 40 pages on it. First of all, I love that the rest of the interview was so boring that after the first time it aired the episodes disappeared completely and besides the confession people did not really care for it. Second, the casting was simply superb in my humble opinion. These are all top notch actors who, I believe, did the best job possible. Third, the story is itself interesting, but selling it as something new that people should care about is an immense work. I can say that they director and the writer did a great job.

My review won't go further into detail because I want everyone to see it. If you ever had questions about American presidents or to see how the media has changed over the years in US history than this is the movie for you. If you like any of the 300 actors in this movie, then you'll love it. If you are just looking for something of quality, again, this is it.