What's Next On My List? (Games) Devil May Cry 4

There are two game franchises that I care for a whole lot, one is Assassin's Creed, the other is Devil May Cry. I can't really put my hand on it, but the whole world just draws me in and makes me care about the fate of these guys. It might be the murderous demons that sometimes have a heart or the insane people who wish to share the planet with them... either way, there is always a big moral lesson in each game and to unravel it is always a great adventure! 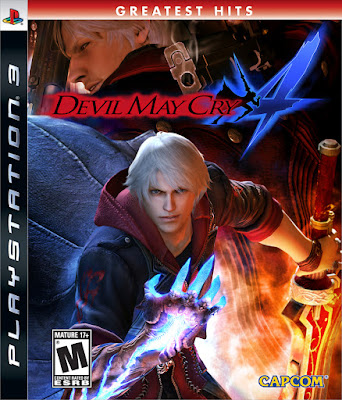 The story: Dante attacks a church that is worshiping the Dark Knight Sparda as their lord. A young man, Nero, is sent to stop Dante because he is blamed for the sudden attack of demons all around the city. Nero learns that it was the church that unleashed the demons and Dante arrived to stop them. Nero also has to face that in him lay demonic powers that, even if he didn't want them to begin with, is later happy to accept in order to save the one person who has been true to him all of his life, Kyrie. The giant statue of Sparda is brought to life and as Dante fights it from the outside, Nero fights it from within in an attempt to stop the high priest from opening the final portal that will unleash all demons.

Game play: Well, it was a bit difficult to adjust because you keep changing between Dante and Nero, and well, once you get used to the hand of Yamato - the arm of Nero which he controls thanks to him being half demon -, it is hard to readjust again to just the sword and guns of Dante. But honestly, that is the biggest problem I can think of. I loved playing this game. I cared for the characters, the story, the music... it all came together. The puzzles were fun, not too hard but it kept you involved. Not to mention that the story played onto the most important trait of us all humans: the wish to keep safe those we love the most. The moral in the end was a simple one, that is, those who play with fire get burned. In addition to you being already in love with Dante, you start to care immensely for Nero who, having been lied to all his life, learns to accept that to tame the monster within he first has to accept it. Having a gift in this world, both the real and the game, can be a curse, unless it is used for good.
Mini-bosses: They were mostly the angels that sought to bring back to life the Dark Knight Sparda. They were not difficult, however, some put up a good fight and there was utter joy in destroying them. I don't you know if you ever had this experience, but sometimes mini-bosses are nothing more than a nuissance... well, no, that is not the right word, I would say they are uninteresting. There is a fine line between 'hard for no reason' and 'unimpressive'. The game managed to find best way to make sure you don't give up and be excited when you beat a mini-boss. I think the fact that they did not look like demons but simple believers added a different twist to the story.
The boss: oh f*ck him, honestly, I had to do it like three hundred times... it was one of the main priests who, of course, had a second form that was beyond impossible to beat! First of all, he looks like a fragile old man, so you kinda fill bad about wanting to kill him. Second, when he transforms he is so ugly that you just shoot and shoot and try your best to make sure he stays dead, but then you go back to the first problem, as in, yeah he is the evil guy, but it's still like a fragile old man... either way, f*ck him, he deserved to die! Very difficult boss fight, is all I wanted to say. 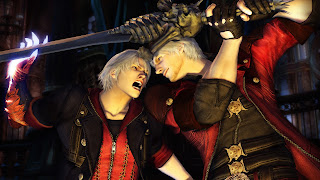 What worked? Well for me everything, really, I had super fun playing it and the story was very good in my humble opinion. So much so that I can't really think of anything that I did not like. I am planning on playing more DMC in the future, possibly replaying this one first, because I miss it terribly, but the time I have for movies is not enough to devote to a video game, especially an RPG of this length. But I'll get there soon enough! And to add to that, I never really liked games that have separate fight scenes, take the original Final Fantasy games for example, the cut scenes take a super long time and you are just grinding like an idiot and not advancing whatsoever... fortunately this game has nothing of the sort, of you just advance and get stronger with every enemy you cross. This is something that definitely played in the favor of the game!

Until the next item on my list!
Bejegyezte: CsorEsz91 dátum: 3:45 AM