To start off this list I thought of a movie that I simply watched because of the casting and was shocked by how much I enjoyed it. As always, I will not blow the ending because I don't want to ruin the twist at the end, as in, how the perfect crime came to be. I just want you to get interested in the movie! The story plays out inside a bank that is being robbed by two different groups... at the same time. Inside the hostages won't sit still, one of them in particular, Tripp, keeps trying to find ways out of the bank. He does so by bothering the two groups and pinning them against each other continuously. Despite the police coming in and stopping both, somebody gets off with the money in a hilarious turn at the end! 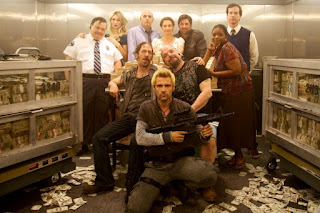 This movie is quite underrated, which is unclear to me... I loved the twist at the end and it had some of the best actors I have known over the years. I think the idea is very original to begin with. Having two groups trying to rob the same bank is simply hilarious to me! And on top of that there is something relieving about the hostages being active. In other hostage situations they convey fear and you feel helpless and they want to make you feel like there is absolutely nothing you could ever do in a situation like this. But not these hostages, no, they keep on thinking about how to survive and their instincts kick in and I think that is brilliant. Every single character in this movie has a very important role in the story and I applaud that. Original, funny and overall breathtaking in my humble opinion!

Watch it? Yes, please do. You'll be surprised. Even if you don't like very single character I can still guarantee that you will have a good time watching it. You'll find yourself rooting for everyone and no one at the same time and wishing that the one person who has nothing to do with the robbing takes off with the money!