Having grown up on Disney movies I am very critical, since I don't think that them being Disney is enough... give me something new, or even if you just recycle a story, change the setting and add more to the characters and the landscape. Really, you can always elevate things and here is a great example of just that: 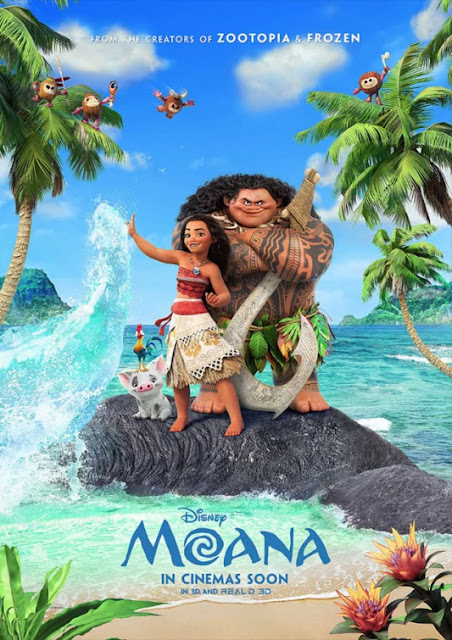 Moana is destined to become the new chief of her tribe, but she is drawn to the sea instead of the land. She discovers that her tribe is descended from travelers, but the sea was no longer their friend and the reason for that is Maui, a demigod who wanted to do good, stole the heart of the island Te Fiti. But since then everything around her is dying. The people of Moana will be forced to leave the island, but not being able to navigate the sea, they are afraid of what lies over the reef. But Moana decides to track down Maui and to put back the heart in order to restore the order of nature. 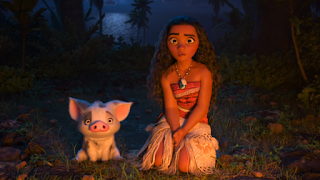 I just adored every single second of this movie. And I tell you why... yes, it is true that we don't need princesses who have to be rescued because girls can do it alone! But I never actually believed that those princesses couldn't do it on their own if they wanted to... they simply fell in love and sharing their life with someone - something we all dream of - became the priority. I liked that Moana had no love interest, because there was no need for it. Still, the dynamic between a female and a male character will always sell more tickets. That is why here too you have a relationship that jokes with that and it worked perfectly without it being about love. To me Disney cartoons were always more about the dynamic between two characters, rather then the fairy tale happy ending. I am not referring to the classics - like Snow White or Sleeping Beauty -, but think of Rapunzel and Jasmine! They didn't need a man, but their relationship with one was intriguing and that's what the story was about essentially! 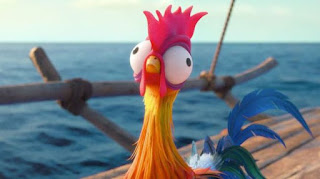 That having been said, Maui was a super fun character and Moana, who was essentially a child still, grew immensely over the movie. The story never forgot to be funny; the movie never forgot that it is also scary. And there was a twist at the end which simply left me with my mouth open. Finally, I loved the villain. For once it wasn't someone whose intentions had to be explained for the viewer to care, and the moral lesson was embedded in the story. It wasn't something they pushed down your throat.
As a last point I wanted to point out the music. Not only did I love the songs, but I missed actual Disney musicals. I don't give a shit what people say about "Let It Go"*, that song has nothing on the soundtrack of this movie! Somebody complained to me that there were too many... come on! It's a musical, there are supposed to be more songs. This is something that Disney has actually done: it starts to write a story and remembers "f*ck the songs!", so they quickly write about 3 or four, just enough to get that Oscar nomination under the belt, and there you go, finished movie. Not only do I love Zootopia (click my here for my review) because it didn't force this on us, but I loved Moana because the story and the songs complemented each other.

[*No offense to Idina Menzel, a favorite musical singer of mine, but there is just something not right about that song compared to how much people hyped it... just to show you, I kept singing songs from Moana after seeing it, while I managed to forget every and all songs from Frozen after it ended! The only reason I like to ask people if the want to build a snowman is due to internet memes...]

Watch it? Abso-f*cking-lutely! This has quickly become one of my top 5 favorite Disney movies. The characters are lovable, the songs are wonderful, not to mention that culturally the Polynesian heritage had to be showcased. I have been studying it in my free time because I am somehow drawn to them, thinking of Hawaii for example, the history, they myths, the language... really I want to learn more and more. This movie just made me want to continue my little research.