I Don't Wanna Be Writing This

As everyone mourns their Princess, I mourn the writer, the brain and the brilliant person who people knew as Carrie Fisher. She was, to me, a very special person. I had a super hard time writing this entry because I am still not over having lost George Michael. This was just as bad as when Rickman followed Bowie this January. 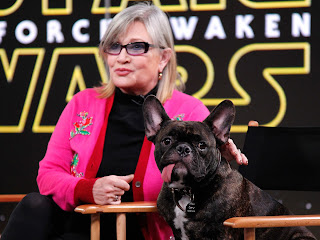 Every time someone dared to attack her because of who she was in the past I got so pissed... because the slave outfit isn't who she was. She struggled with drugs because she had too much pressure put onto her, and I understand that. Have you seen Disney channel actors? People who are exposed to fame at a young age can come up with depression and substance abuse. And she never hid that she made mistakes, she never pretended that her past cannot be looked up by anyone. She never pretended to be a role model, but owning up to one's mistakes is tough. And that was not the only thing of course, Fisher was diagnosed with bipolar disorder, which she talked about openly. She was one of the first and only who tried to emphasize how the brain is just an organ, like any other. Organs can get defective. Organs can stop working properly. Organs fail.


“Stay afraid, but do it anyway. What’s important is the action. You don’t have to wait to be confident. Just do it and eventually the confidence will follow.”

She was, above all, a wonderful writer. She had contributed to several of the best scripts out there and she did many anonymously. She doctored and had helped the first version of scripts like Milk Money, The River Wild, Love Affair, The Mirror Has Two Faces, Kate & Leopold, So I Married an Axe Murderer and Sister Act. I remember when I saw her on 30 Rock after so many years and it was my favorite episode! I laughed so hard at all of her jokes and it left me wanting more. I grew up on Drop Dead Fred, and I will never forget her in The Blues Brothers. Not to mention Soapdish, and When Harry Met Sally..., that I only saw recently and yes... she was the only person who we'll always think of as Princess Leia Organa, sorry, General.


“The father who flipped out about it, ‘What am I going to tell my kid about why she’s in that outfit?’ Tell them that a giant slug captured me and forced me to wear that stupid outfit, and then I killed him because I didn’t like it. And then I took it off. Backstage.” —On the rumored ban on Princess Leia bikini merchandise. 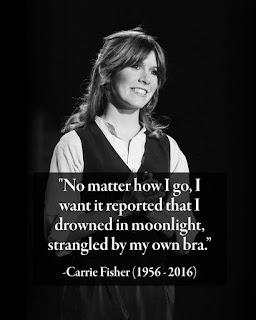 I am happy that the Star Wars universe will live on because it is something I will make my children watch too! But the movie that I will always think of first will Postcards From The Edge, written by her, based on a semi-autobiographical book by her. When Meryl Streep accepted her AFI award Fisher gave a speech about what a good job she had done playing the main character, so much so that her family wished she was Meryl Streep! She was hilarious, always honest and fearless! She spoke her mind and not many people do that in Hollywood, be honest, there are very few of them. She came back from where many never recover from. She used her brain and not her looks and people hired her for that. She will be missed incredibly by many and that alone makes me smile.

I just watched her appear on 8 Out of 10 Cats in this year's Christmas special. She was the funniest and my sister and I watched it on Christmas, because we were happy that there was news of her wellbeing. I am so tired, this year? I mean... every time I managed to get over or somewhat emotionally recover from a death this year, another one followed. I understand that this is life, that this is also part of life, but I don't want it to be. I'm concerned that this year was just the prelude to something much worse... hopefully not, but it did make for a pretty shitty holiday season.


"[on the sale of Lucasfilm to Disney] I'm now a Disney Princess!"

Remember her, not for the roles she played, but the work she has done and the battles she fought and won. She even beat the heart attack, but it left her weak. Even in the end, she went out fighting. Remember that. She will always be my role model. I will miss you tremendously, Ms. Fisher.
Bejegyezte: CsorEsz91 dátum: 5:16 PM