What's Next On My List? (Games) Assassin's Creed III

I managed to complete this game last summer, and since didn't get a chance to talk about it here. I did discuss it with a lot of friends of mine, so I thought I'd share our common grief. 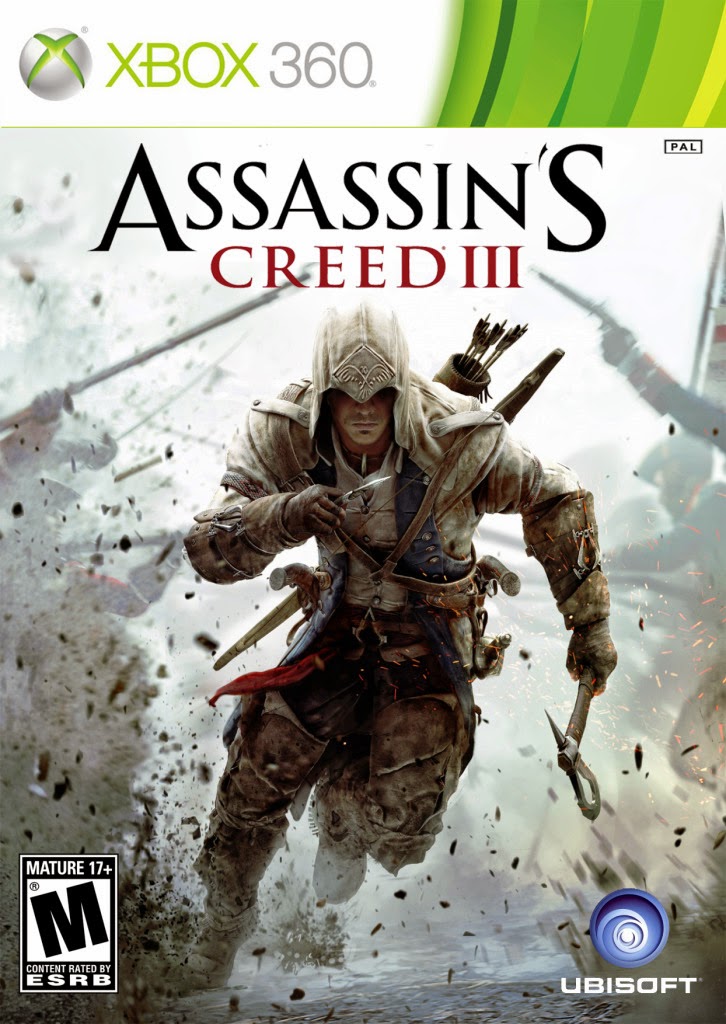 The story: Desmond Miles goes into the Animus to reincarnate one of his ancestors. In this game he goes back to the War of Independence between the British colonies in the Americas and the Crown. Our main character appears to be a man named Haytham Kenway, who travels to the colonies from England to enforce the Crown's wishes. We soon find out that he a Templar (one of the bad guys) and although he personally has nothing against the natives on the American lands, some of his partners do. Haytham falls in love with a native woman and he fathers her child, Connor. Connor, in order to save his village seeks training from a man named Achilles - an assassin. Connor helps the American troops in the War of Independence as they promise safety for his fellow natives. He also sets his mind on avenging his mother's death, who died in a fire caused by his father's friend, Charles Lee.

Game play: The biggest problem with the game was that you can barely enjoy the towns. Yes, I know that the point of these games is to sneak around, but when the militia decides to attack you - even when you have no wanted posters or have not done anything suspicious yet - then you just simply get bored. I found myself mostly running from conflict, while in other games I loved fighting on the streets. The tomahawk was a wonderful addition, another reason why I hated running away... and there was a lot of running! Each time you left the town to get back to Achilles, going back took like six hundred hours! And I know that there was the carriage, that was supposed to fasten travel, and I don't know if my game was jammed, but it kept taking me to the wrong place, so I had to run three times as much! In the end, I just gave up on using 'fast travel' altogether and went by horse as much as I could (that is, until they didn't get stuck between two rocks). Biggest problem I encountered was that I didn't care... the side missions? I completed about 3, because I didn't care to explore the world, for the very reason mentioned above. I had 37% synchronization in the end, to give you an idea of how little I cared. Also, explain this to me, you get a series of clothes you can buy Connor, but the cut scenes? They keep showing you in the same white outfit. What is that about? In Brotherhood (click here to read my review!) Ezio always had the outfit I put him in... Even in the pre-rendered cut scenes! (And yes, I enjoy changing outfits, I'm a girl and I get bored very soon!).
Mini-Bosses: a drag... I recently watched (again) Sequelitis - ZELDA: A Link to the Past vs. Ocarina of Time, by Egoraptor,where he talks about how "the games idea of difficulty is waiting", which in itself is not really difficult but it gives you that illusion. I remember having to fight off 10 soldiers to get to the main guy and it always took me 10 minutes because I had to run away for a minute after each kill to recover my health and even then I got to the mini-boss and I couldn't get 100% synchronization BECAUSE I was supposed to jump from a tree... I can recall three different cases when the tree was nowhere near the target and I also could not find the one tree I could climb on and then jump onto the other one... as fun as running around the forest was, it was a bit all over the place. 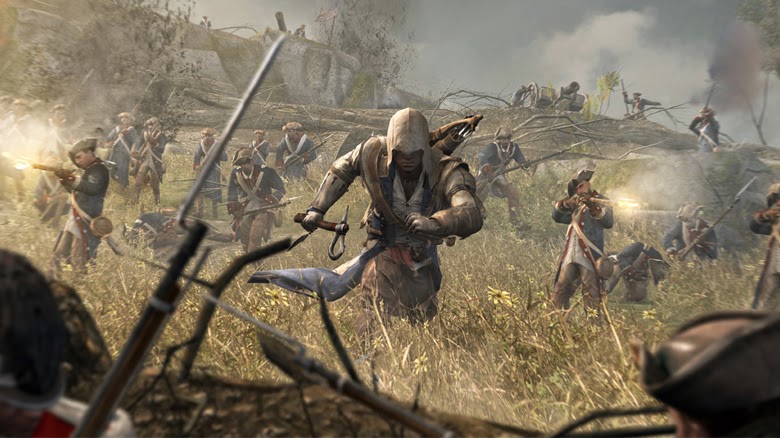 The Boss Fight: This was probably the biggest disappointment in the whole game for me. I was looking forward to fighting Haytham, I thought he would be the boss battle, which turned out to be a 'drunken disaster'. I mean that literally: Connor is half wounded and you have to use gadgets around you. This took me forever, to actually find the right combo to protect myself and be able to limp closer to something that I can use... I died 300 times and then I did it in three seconds... That did not feel very fulfilling. However, the bad guy was not our dad, but Charles Lee. Oh Lee, you'll remember him as Connor only mentions his name like every two seconds in a 100 hour long game. You chase Lee around, then chase him some more and then you ki---. He dies in a cut scene. ARE F*CKING KIDDING ME? I don't even get to kill this guy? He just died in the cut scene. The main boss fight was running around like and idiot and I don't even get to push the blade into his heart? This just pissed me off, this is straight out where the game lost me completely.

What didn't work? You know, when I actually look forward to playing with Desmond, you clearly got something wrong in your game... You have either played it yourself or you have read reviews of people being disappointed and I can tell you they are not lying. I wanted to love this game so much! I was actually studying the War of Independence while I played it and it was true fun all the way through, I didn't even care about the running or the faulty trees or the fact that Connor was not a very likable character... I don't want to complain, but dear god he was boring! 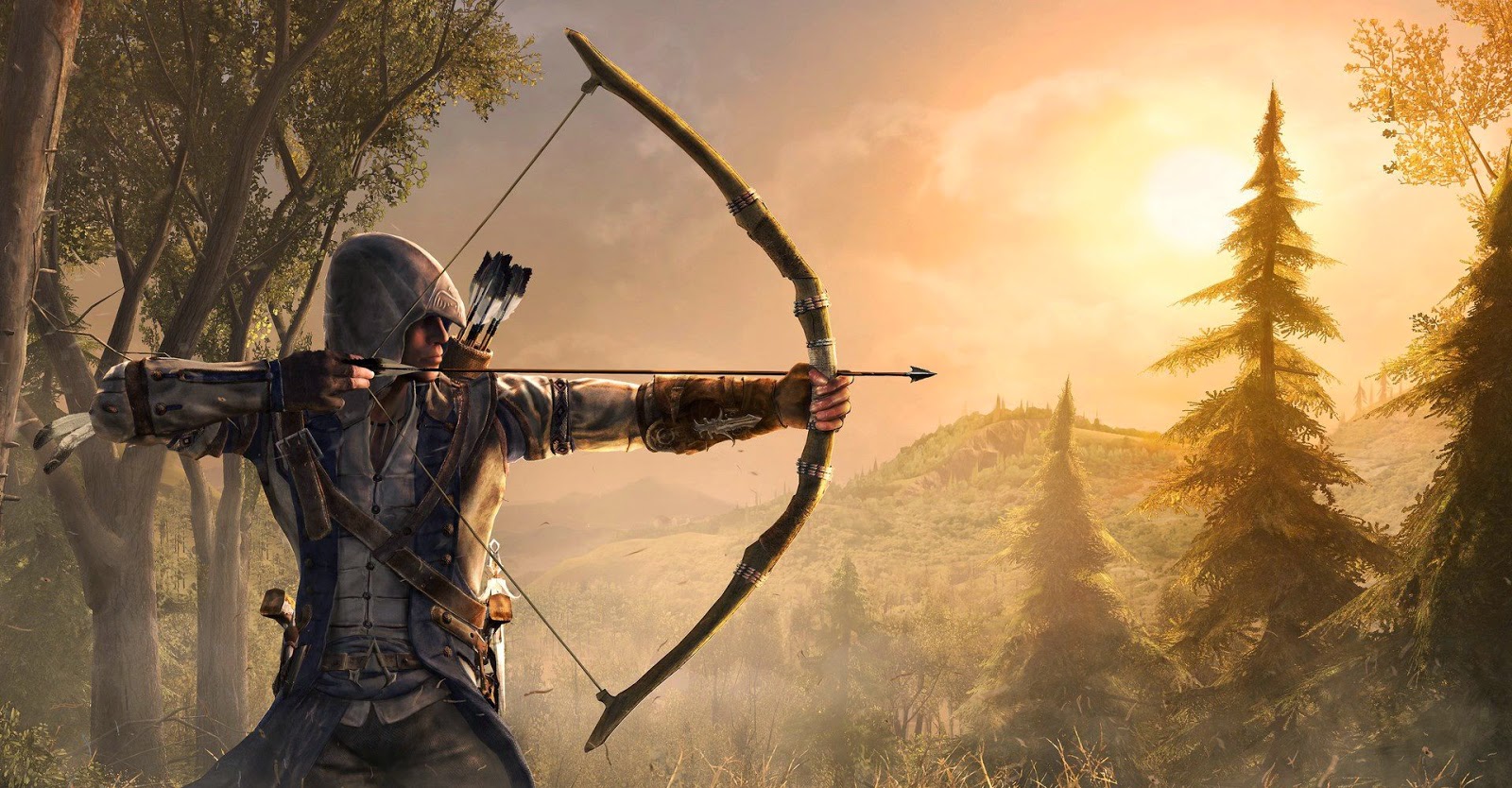 What worked? Very little, unfortunately. Desmond's scenes were really cool and I enjoyed those a lot. The boat missions? Surprisingly very entertaining and when my bombs hit the other boats I was very satisfied! The music and the scenery were again fantastic and I even liked the story! Don't get me wrong, this is not the worst game ever but it went wrong on the simplest of things and this drives me mad! But something about the game did get to me: I am not sorry I played it and I am glad I got through it because I love the franchise. No matter how mad I get I still enjoy it somehow. I will one day - in the very far future - replay it, just to see if I got better at it or if I remember incorrectly, but the small details that I complained about will still very much be there, unfortunately.

PS: Looking forward to the AC movie! Read more about it here: