FRESH FROM THE THEATRE: Star Trek - Into Darkness 3D

NO SPOILERS YET: I am here to tell you that you are going to read a couple of negative criticism about this movie. Let me tell you that I never listen to critics myself prior to watching a movie, because I hardly find anyone who shares my opinion (unless when they talk about Adam Sandler movies... they are usually dead on then!). So I got up, dragged my ass to the cinema and had a wonderful time! The movie is great, the actors... oh dear god they are off the hook! You might get more references from the old series, but I who has NEVER seen a single episode of the old ones still adore this new series and I can't wait to see more. If you think I am exaggerating and I can't recognize when something is wrong - I'll be dissecting the movie further now - but if you want to avoid spoilers just trust me when I say, even if you end up not liking it: Let that be your choice and not someone else's! GO SEE THE MOVIE!

That said, let me tell you about the first movie in which I actually and genuinely enjoyed the 3D!

SPOILERS FROM THIS POINT ON! Kirk and his team are on a dangerous mission, that at first causes him to be demoted, but after the Star Fleet Headquarters are bombed and his superior dies, he gets back the command of the USS Enterprise. 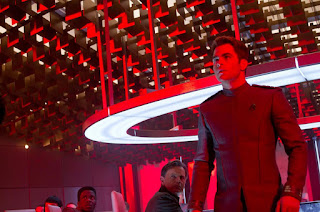 He asks permission to go after the man who is responsible for the attack - someone known by the name of John Harrison. They track him down on a Klingon planet, which is enemy territory, and when they find him - he surrenders. Once he is on the USS Enterprise, they discover that he is a three-hundred year old superhuman who was frozen and has now been awaken by Admiral Marcus. Harrison reveals that his name is Khan and that the admiral means to destroy him and his crew of 72 people still asleep in pods that have been transformed into missiles. 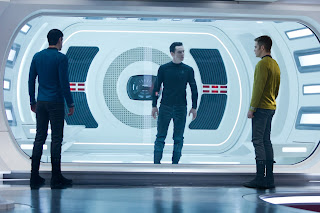 Kirk helps Khan defeat the Admiral, as he threatens to destroy the Enterprise and its crew. But Khan betrays him as he has no boundaries and wishes to stop at nothing to get his crew back. Spock tricks him and the USS Enterprise is almost lost when in the last minute Kirk sacrifices himself to save the ship. He is then revived with Khan's blood and Khan is stopped by Spock, putting him back to sleep. Kirk gives a beautiful speech were he recites the oath he took when he became captain and his crew sets out to conquer space. 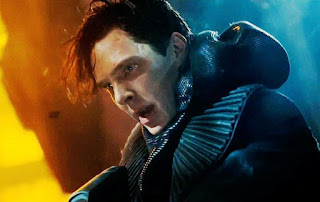 Where can I begin? I wasn't a big fan of the old Star Trek franchise, as I mentioned above. I do love science fiction and well this casting speaks to me a lot more than the old one did. So when I saw the first one in the theater I knew I was hooked. It has been four long years, but for me personally it was totally worth the wait! I also liked that despite its success they didn't just throw together a stupid sequel that has no beginning, middle or end. This story - for me - was completely thought through, the characters were true to themselves and the little but very much needed comedic bits were hilarious! And even if we all knew that Cumberbatch's character would turn out to be Khan, the moment when he reveals his name still gave me chills!

Also, they gently set up the Klingon planet which will hopefully came back in the future. One criticism was that this movie used a lot more references to the original series and personally I didn't feel like it was forced at all. It might have bothered me if it had points that could not be followed but that problem never occurred. Personally the only thing that I've found a bit forced was that they managed to save Kirk. His death was very beautifully done, but the minute that Spock ran after Khan I immediately remembered that he has super blood so I knew were it would go. And in the end I didn't mind simply because I trust J.J. Abrams. Think of Agents Of S.H.I.E.L.D - do you like it that Joss Whedon resurrected Agent Coulson? I don't. I think it is stupid but there is always the argument that they keep doing it in comics. I just hope they give a good enough reason for it... Anyway, I would've hated it far too much if the third movie would begin with the resurrection of Kirk - here at least there was a built up to the possibility of it. 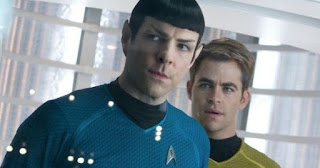 Another thing I wanted to mention - just on the subject of trusting Abrams - Spock calls up his older self and asks him about Khan. The older one says that they managed to defeat him but at a very high price. Now, the viewer might think that it was the death of Kirk - but he was resurrected and the old one must have known that. And putting him back in his pod to sleep isn't exactly the same as being defeated! So I believe that this story will still continue or at least there is the possibility to continue it and I am very excited about that. And the reason for my excitement is none other than the person who I hope will win this year's award for 'Villain of the year': Benedict Cumberbatch. 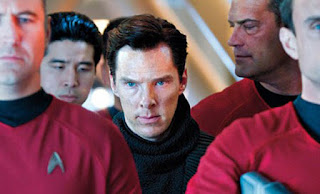 It's very funny to me that the only reason I watch these movies is usually the villain. In the first one I loved Eric Bana and in this one, well... let me tell you that I would gladly volunteer to be killed by Khan if he was played by Cumberbatch! The first scene he had you only hear his voice and you start to shiver... I have been following his works since 2006 and I couldn't be happier that people started recognizing his talent thanks to Sherlock. I sure hope he gets more roles playing villains. I also enjoyed the fact that I just couldn't hate him. He was still so charismatic and although he clearly went nuts toward the end - I still wanted justice for him. It might also be because I hate the actor who played the Admiral... But I loved Kirk and I also cried when he died, but still... "KHAAAAAAAAAAAAAAAAAAAAAAAAAAAAAAAN!" 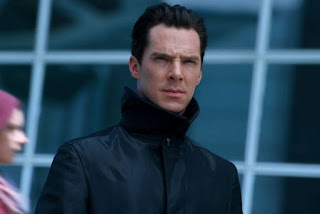 I was actually expecting that line throughout the whole movie and it was placed very wisely and it added to the story just what it needed! I honestly hope he returns because he was a great adversary to Kirk - Chris Pine in this movie really transformed the role for himself and you could feel him moving freely in the character and making the viewer care a lot more for him and his crew. The third movie I think will be wonderful if Abrams doesn't rush it so hats off to him for making such great casting choices four years ago! 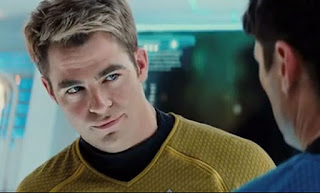 The last thing that should not go unmentioned was the CGI: WOW! I am very often disturbed by the bad green screens and the extra effects that are not needed. This movie didn't have any technical faults, not to mention that the 3D worked perfectly. This was the first movie in which I didn't feel that it was too dark and I couldn't make out anything or that it was all just an extra filter for those 2 seconds of film where something moves into the audience's direction!

Overall this was a wonderful movie. The music score is beautiful and it accompanies the story wonderfully - I'm going the buy it the minute I get home! So watch it, don't watch it? I'll let it be your choice. If you know the old series you will probably be more influenced but if you are like me - an outsider, lover of the first movie, then trust me you are going to enjoy it! Totally worth the theatre ticket price!

PS: It just turned out that Abrams cut a showering scene of Cumberbatch from the movie! What the hell?! Nobody cared about the women in underwear, yet we had two of those scenes! Good plan overall, now you made me want to buy the DVD even more, but seriously, why did you cut it? :(