So, here we are, slightly 4 months after I decided to actually write this review, but I wanted to do it nonetheless! While writing, in the right-upper corner of my screen, I am currently also watching the last part of Twilight, which is at this point irrelevant, but I will actually bring it up. God, this movie is stupid! Anyway, here we are: 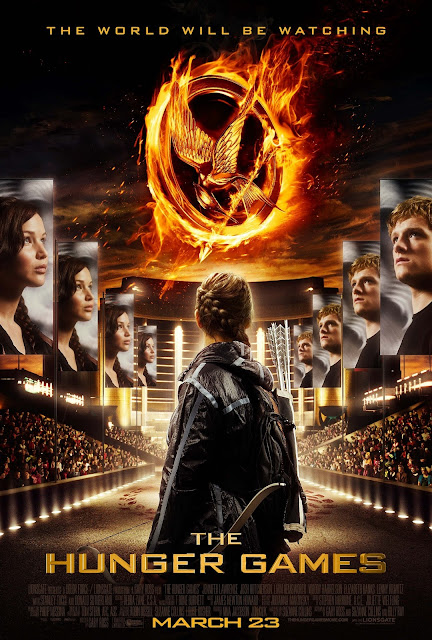 You all surely know the story, and I want to be as quick to recap it as possible. We are in a dystopian future: nation divided into 12 districts, and every year there is a reality show in which a girl and a boy from each district fights for their chance of survival in the Hunger Games - and only one can stay alive. 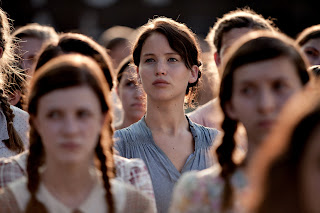 Katniss Everdeen is young girl from district 12, the poorest of them all, and when her sister is picked for the games, she volunteers as a tribute. Along with her, the second unlucky child is Peeta, a boy whom we later discover has been in love with Katniss for years. The two both have something they are good at (for Katniss archery) and with it they manage to stay alive until the end. The audience seems to be enjoying the love angle and they play on it just to arrive to the end where they are supposed to kill each other. Katniss suggests that they commit suicide together - and as she predicted, the Games cannot be ended without a winner - so the President allows for them to stay alive, but this drags consequences with it. The two return home, presumed to be in love, but it seems that Katniss isn't quite sure of her feelings. 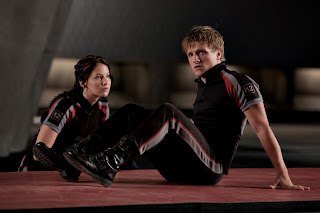 Again, I have not read the book... OK, don't boo me! Sorry, I genuinely don't like reading. I am going to, now that I know that I enjoyed the story - whoops, spoiler - and it is interesting to see why.
I first didn't care, well, there wasn't anything to care about, I had no idea this book even existed, not the mention the movie! Until one day it appeared on thatguywiththeglasses.com and it was reviewed by Nostalgia Chick and Nella. This happens to be the latter's favorite book. Now, being fans of the source material, I decided to rely more on their opinion then anyone else's: They liked it. Many others didn't, which is fine, but they made me want to see it. First thing that got me hooked was Jennifer Lawrence. At first I got the sense that this might be as bad as it is with Kristen Stewart in the Twilight movies, watching her be in constant pain and physically incapable of expressing any other kind of emotion, but there is a scene with Woody Harrelson that is witty and clever and simply put: genius. And from that second you are completely with her till the end. 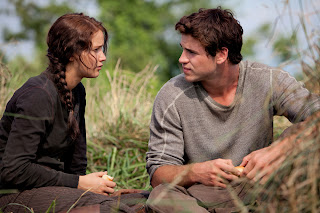 After this movie I started checking out her work and interviews and I completely fell in love with her. That academy award nomination was not far away trust me and I am certain that many more are ahead of her! She is a great actress and I can't wait for the sequels!
Another thing I loved is that the movie didn't push on the love triangle. I've read that it is far more emphasized in the book. Here instead you have this constant knowledge that Katniss never really loved Peeta. She didn't hate him or anything, but she is given hints from Harrelson's character Haymitch that the audience loves them together, rather than apart - and the first lesson is that they need to please the crowd to win. She is constantly struggling with the thought of having to lie to Peeta, while knowing that that is her only way of surviving. Not to mention that clearly her heart draws her back home to Gale, her childhood best friend, played by Liam Hemsworth. She even says that she wishes she could forget all of this, while Peeta tells her that he doesn't want to - he is happy. 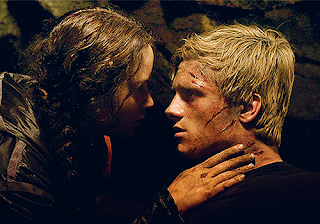 So, I thought that the casting was great. Of course, you could argue that Josh Hutcherson wasn't the best choice, and I would agree with you. The biggest problem he presented was that in the story he seems to betray Katniss in order to survive and he convinced me far too much of the fact that he doesn't actually care about her at all. From that point on, until the scene where Katniss takes his hand on one of the talk shows and he smiles at her, I didn't really believe that he cared at all. This was on my part the biggest problem. I didn't care that he was shorter than her or that clearly Hemsworth is more appealing to the teenage girl viewer, rather than the bad direction he received from the director... (UPDATE: I have now seen the movie 4 times and this problem has never presented itself again to me. I don't feel like changing what I wrote, because I did believe it then. But now, loving the movie as much as I do - it is perfect the way it is!) 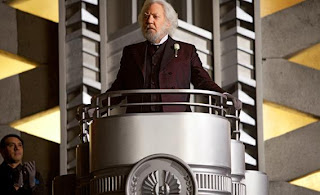 The best casting choice however, by far, was Donald Sutherland as the mean President Snow, head of the Hunger Games and of course, leader to this nation. You would never take this actor for a bad guy, and wow he took my breath away! He didn't have many scenes, but he completely made it his when he did appear. I am looking forward to more of his evilness! He is the kind of bad guy that doesn't even talk and you already fear him. 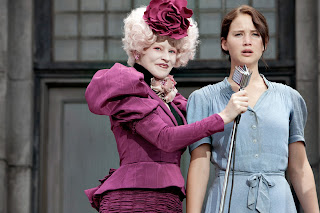 Altogether, the thing I enjoyed the most was the whole idea behind the story. This is the reason why I wish to read the book. I hate reality TV and this story tries to emphasize that there is supposed to be a line that cannot be crossed: making children fight for their lives is one of those lines... In the movie Gale even says that he found a way out: if people stop watching, then they won't air it anymore. However, this is in a '1984 like' world where every TV shows this and it is an event that must be watched! There are no alternatives to it. Even though in a beautiful scene Gale refuses to stare at the screen where Katniss and Peeta are kissing, you can still see the masses watching. You think we need another season of The Real Housewives of Beverly Hills? Nope. Are we going to get another one? Yes, because 'the average joe' has it's TV on in the background all the time and that is counted in the ratings and some believe that if there is need for it, there should be more!


"There used to be a time when you would come home and reality was so crappy, you would turn on TV to watch stuff people had made up so you could escape from the crappy reality. Now, you go out and deal with dickheads and morons all day and you come home, and go 'I just want to go home so I can watch Dickheads and Morons on TV.'"
- Patton Oswalt 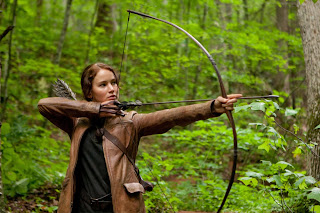 I honestly hope that a time will come, when they will stop filming everything, but until then, at least we have great fiction to rely on. Of course, the movie has faults. This movie is pretty much family friendly, and most importantly, although it is the Hunger Games, they never really starve. We also discover that Peeta has, if I understood correctly, super-human strength yet he decides to use his painting skills instead... fine by me, not everyone is capable of killing, but there was no point to set that up if it isn't going to be used. Also since this is a very family friendly movie, the blood and the more detailed killings were taken to a minimum - this of course is one critique. Because of this choice people can highlight the differences between the book and the movie, AS THEY ALWAYS DO TO RUIN THE PLEASURE OF THE SIMPLE VIEWER! But you need to understand that nowadays the objective is to get people in the theater and not so much staying true to the source material. Even though I have read that this is by far one of the most accurate portrayals in the past decade. And a PG-13 rated movie is surely going to bring in more teenage audience then a higher rating. 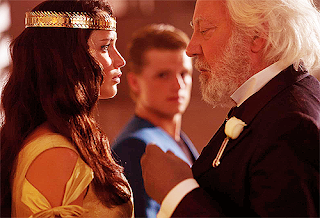 Anyway, because of the constant focus on wanting for the audience to feel bad for the characters and be sad for every single death, they lose focus on the small things, like the starving... But that said, the movie is truly great. The casting choices made are fantastic, and for the exception of one very stupid green screen scene, the visual effects are stunning. You are truly transported to a whole new world! Not a pretty one, but an intriguing one none the less! This is definitely worth a rental, even if you haven't read the book, don't worry, the story telling takes care of you!

So that was The Hunger Games, coming up next are two cartoons that Disney&Pixar brought us, I'm sure you can guess, Brave and Wreck-It Ralph! Stay tuned as I have very little free time, but plenty to say! 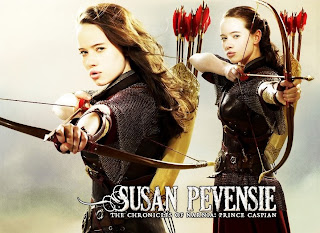 PS: I have been a huge fan of archery ever since Disney's Robin Hood (1973), not to mention my favorite comedy of all time: Robin Hood - Men In Tights (1993). Years later my passion was relighted by The Chronicles of Narnia's Susan. Now, with Green Arrow from Smallville getting his own series, of course this mostly influenced by the success of Hawkeye from the Avengers, archery has become a trend again. But I have to say, I find it plenty more sexy when the bow and arrow are in a woman's hand, so go Katniss :D
_ _ _ _ _ _ _