Well, while on the subject of archery, let us talk about a cartoon. I don't do these often and now I do have a couple that are worth mentioning! Our first is: 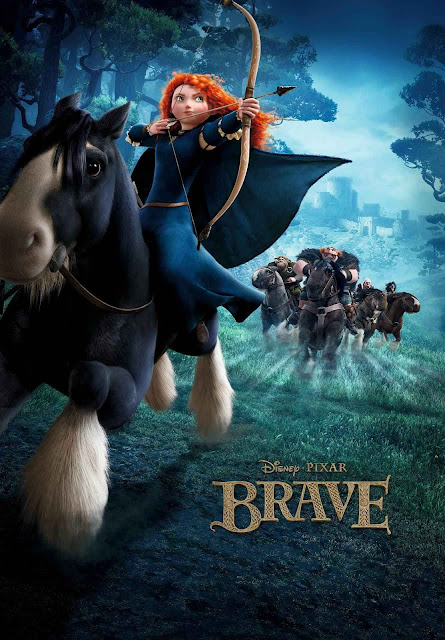 Scotland is divided between four clans, one of them has been chosen as the monarch family. This is Merida's family, our main character, the Scottish princess with the heart of a true hero. She is quite boyish, as she prefers to take part in hunting adventures like her dad, instead of acting like a princess. Her mother invites the heads of the other clans and their first born sons to compete for Merida's hand. She flips out, as she doesn't want to get married, she still wants to discover the world. In order to get her mom off her back, she asks help from a witch, who gives her a potion that turns her mom into a bear.

Now, it was a bear by the name of Mor'du who attacked her as a child, but her father protected her at the cost of his own leg. Being afraid that her mom will be mistaken for Mor'du, she gets her away from the castle and tries to find the witch. They find out that in two days the curse will stay on forever. They are discovered in the castle, but Merida manages to save her mom from the angry father. Her mom learns that Merida has become really skillful and all because she learned things for herself and didn't sit down and wait to become a princess. Merida also learns that she needs her mother, and even though perhaps sometimes she doesn't listen, that might be because she isn't talking to her. 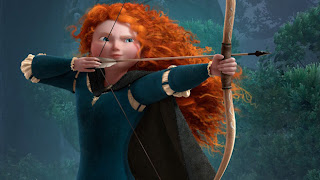 There is a beautiful background story, of four brothers among whom their father divides the realm. One of them however wishes for absolute power and he too encounters the witch. He turns into a bear and kills his brothers, bringing about chaos. We discover that this was Mor'du, who blinded by jealousy become victim of the course and remained trapped in a bear's body. Now, he is the key to Merida discovering that the bond between her and her mom has to be mended in order to be able to save her. 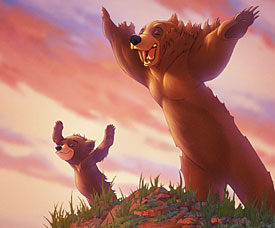 Although this tale is very beautiful, the biggest problem with the whole movie is that Disney ripped off... well, themselves. I have encountered this phenomena previously and I am quite disappointed as this story would've been much better with another animal. Brother Bear ring a bell? That was such an elaborate and touching story that this one completely lost me. I will admit that the animation is spectacular and that the characters are lovable though. The parents' marriage is very beautiful, there is place for several comedic elements and well, the mom behaving like a queen even with the body of a bear is the cutest thing ever! I couldn't stop myself from laughing. However, Merida, unlike her mom, learns her lesson about two seconds before it is too late. We are never given any indication on what exactly her lesson is and the witch as a comic relief (even though she was quite hilarious) didn't really fit into the otherwise slow pace of the movie. 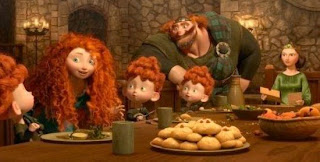 To simply put it, the ending was rushed. The lesson isn't really learned and we only come to the very simple conclusion that there wasn't really any conflict to begin with. It is also worth mentioning that Disney is trying very hard not to kill anyone, as they have received plenty of criticism for that. However, this is the reason why the story never has any depth or real weight to it. The voice acting is really great and I recommend for an afternoon with your kids. People might think it stereotypical, but I wasn't bothered and I am a huge fan of Scottish culture. I could see that there was no intention of hurting anyone's feelings or make fun of the Scots: This is just a simple family. 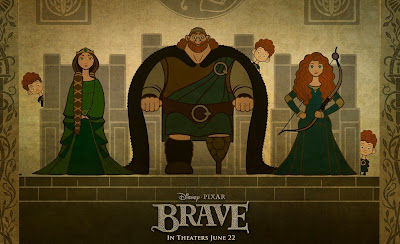 The best thing this movie has achieved was giving us a strong heroin who doesn't need a hero by her side. At the end of the day, every single cartoon results in a damsel in distress in need of a saviour. Cartoons like Tangled and The Princess And The Frog have already introduced the idea of a strong female character, but they couldn't do without the love story. This movie doesn't have it and really, there wasn't any need for it.  I'm not saying that this has to be the direction from now on, nor do I think that it should be the only one of its category. This was a great first step!

Do try and rent it if you get around to it, as I said, visually it is stunning! I do recommend it to my school mates (English majors), as there is plenty to learn from the Scottish accent! Also, if you don't look for a deeper meaning, it does have a great story with lovable characters.

Stay tuned, as I have recently been to the theater and have plenty to tell you! ;)