Yet another assignment before the semester ends. I am now writing about cloning mammoths, as it was the topic I have chosen for my 'popular sciences in the media' class. This is also available on ZEEN, along with the articles of all of my classmates, be sure to check them out too!


A Hope To Bring To Life The Past:
Cloning The Woolly Mammoth 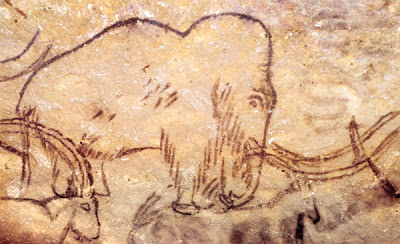 “The key to cloning a woolly mammoth may be locked into the Siberian permafrost.” Time Magazine has reported in the middle of September that scientists might have found the key to clone the woolly mammoth.
Scientists all over the world have been trying for years to bring back to life this magnificent creature. The technique they are using would be to plant the living mammoth cell into the female elephants’ ovaries so that it would give birth to mammoths. Biggest problem being that so far there has been no luck in finding living cells.
This last September however in Ust-Yansk - the Yakutia region on the Russian Arctic coast – a team of scientists has discovered fur and bone marrow with cell nuclei completely intact. A professor from the North-East Federal University, Semyon Grigoryev, however warns us from being careful in not misinterpreting their findings: The cell being intact doesn’t necessarily mean that it is also living.
“All we need is one living cell which can reproduce itself autonomously.” Semyon Grigoryev told Reuters.com in an interview in late September. “Siberian ice might preserve the bodies of mammoths, but it is not kind to them. Ice crystals puncture cells, spilling out their contents. Even if the DNA inside the cell is not exposed, it tends to break down over time.” Discover Magazine reports in an article published on their website on June 6th 2012. 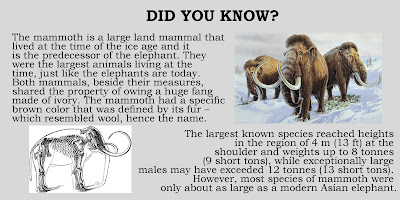 Not only is the issue of finding living cells that scientists are concerned with, but there is also the problem of a female elephant being able to ovulate only once every five years. Each egg that they have is a 2-centimetre-wide ball rattling around an enormous cavern. Once it is released, the female almost immediately has sex. Doctors and scientists say that it is almost impossible to find one elephant that is fertile and not already pregnant. This makes the procedure of collecting mature ovaries to combine them with the mammoth cell quite hard and sometimes almost impossible. You might now understand why elephants are considered endangered animals. Not only their way of living has been made more difficult by us humans, but their reproducing procedure takes up a lot of time – time not many have, including scientists – and we are in a hurry. In an article released by The Telegraph on August 4, 2008: “The population in the 1980s was around 1 million, with around 70,000 elephants being killed a year. The total African elephant population is now less than 470,000.” Which means that killings rate of African elephants for their ivory is so high that they could face total extinction by the end of the next decade.
It is unknown if mammoth cloning is on the verge of a great scientific discovery, as we do not know yet if the cells recovered can be used. However we are hopeful that not only these wonderful species can be saved but that soon its predecessors will walk among us.