What's Next On My Marvel List? (Games) Marvel vs. Capcom

This one is going to be quite short, however it is among my favorite games so I definitely want to make sure I mention it! 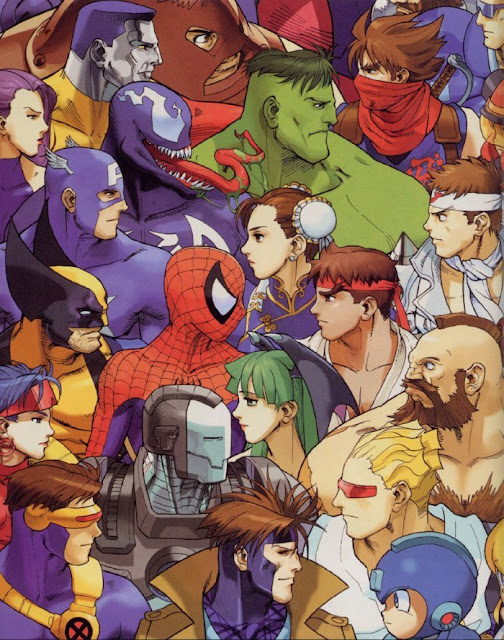 This game has a quite long origin, but the most important step towards it was in 1996, when the X-Men vs. Street Fighter game was released, unleashing the potential of the Marvel heroes encountering more and more Capcom characters. It was originally an arcade game, but due to its success it was later released for other consoles. The story portrays Ryu meeting Cyclops, and then the X-Men who are interested in the incredible force he possesses.

Just one year later Marvel Super Heroes vs. Street Fighter (1997) was released. Like the previous one this featured combats, and in addition to all the features introduced and the secret characters you could get, the player could now summon their partner to perform one of their special moves without changing their currently-controlled character. The arcade version of this game received great reviews, but the versions released for other consoles had mixed reviews.
One year later Capcom prolonged the list of known heroes beyond the Street Fighters: Marvel vs. Capcom: Clash Of Super Heroes (1998). I have played with almost every installment of this series, but this one is definitely one of my favorites. My brother always loved Mega Man, and although the first version had all the awesome X-Men in it, this one had Venom. Just think about it, Venom vs. Mega Man? The levels of awesome and epicness were through the roof!
And then, oh boy, it is afterwards that the best one of the series came out, with over 50 playable characters, among them the most iconic ones, like Doctor Doom, Thanos, M. Bison, Hulk and even Sentinels!
People always love mash-ups and cameos - I know because I do too - and sometimes you can't even begin to imagine things, because you'll be disappointed if it doesn't come true. For example, all this talk about a Justice League movie. Even if all the money and the crew comes together, it'll be at least 3 years until something gets done and you know that they are going to screw up something in the casting, it's just bound to happen! And even if they don't, the DC movies just don't use their money properly. If this Arrow series is headed somewhere, you'd think that they will use him for the movie, right? But no talk of Green Arrow so far in the movie... assuming that there is a movie at all! Several Justice League scripts have surfaced with no luck so far. I do hope that something useful will come out of it. But you see, don't you? I am already coming up with ideas and I will be majorly disappointed if my dreams don't come true, and yet they probably won't because nobody cares about my opinion. Or think about this: an actress by the name of Angie Harmon in an interview with Conan O'Brien said that she would love to play She-Hulk. Now she is literally the spitting image of her and she would be awesome for it. And consider, all previous Hulk movies have somehow failed - if indeed they wish to make one with Mark Ruffalo, it could easily be the story-line of how Bruce's cousin Jennifer got the same gamma infection as him from a blood transfusion. It would be quite awesome, but I don't dare think about it, because even if they do make one, they probably won't cast her. That is way these wonderful mash ups, just like this game are a dream come true.
Anyway, back to our original point, after the last game in 98' only a new installment came out: Marvel vs. Capcom 2: New Age of Heroes (2000). After ten years finally a new sequel was released: Marvel vs. Capcom 3: Fate Of Two Worlds (2011). At the International San Diego Comic-Con that year they announced that an updated version with the title Ultimate Marvel vs. Capcom would come out soon. These all featured some new, some old characters and just this year in September the newest part of the saga is coming out for the X-Box and the PlayStation 3: Marvel vs. Capcom Origins. I can't wait for it!

If you get a chance make sure to check it out, it is truly an awesome game, which I might have mentioned before :D
Bejegyezte: CsorEsz91 dátum: 9:12 AM