What's Next On My Marvel List? (Games) Avengers Alliance

So you might not know this game... actually I'm pretty sure you don't. It is a facebook game, but it belongs to the good ones. Every facebook game has the same structure: you need friends and money to be able to get anywhere. Personally I like the games at which you can advance without your friends. You see, my friends don't care for games... it sucks really because it is a big part of who I am. Another thing is comics: I love comics. But you already knew that if you scrolled down or if you had been following my posts lately (or simply looked at the header!). So, if you only have 1 other friend who plays the same game, you can consider yourself lucky. After I saw the Avengers (click here for my review!), I was longing for something, anything that had a connection with Marvel, and then I saw a friend of mine's wall and it said "XYZ was awarded numbers point in Marvel: Avengers Alliance. Play now!" 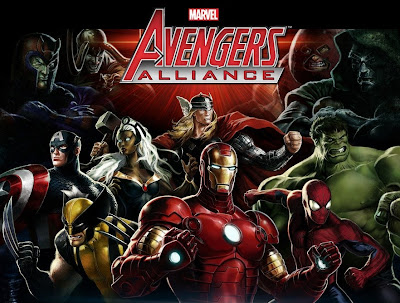 At the start of the game Nick Fury tells you that you are an agent of S.H.I.E.L.D. You can create your own agent, give it a name and choose a sex. I wasn't particularly original, I called mine "Agent Hill", although the character Maria Hill is featured in the game. I still feel eternally stupid about that.
Afterwards you meet Iron Man, Black Widow and Hawkeye: they become part of your team. When you reach a certain level you are given a choice to choose from 5 heroes who will also join your team: Iron Fist, Cyclops, Marvel Girl, Invisible Woman and She-Hulk.

From then on you need to earn Command points to be able to recruit more heroes. The more famous a character is, the more points you'll need to get them. To achieve these points you need to either hit the enemies hard or defeat big bosses after which a little lottery appears with 9 items, out of which 3 are Command points.
There are 10 chapters to the story and each chapter has 5+1 levels. The extra level can only be played if you have that special character that is needed to defeat the boss. Each level has a team-up, which means that the mini and the big boss has to be defeated with their help (it also gives you a taste of what the other characters are capable of, so you can decide which one to get!). When finishing these levels you get a rating which is translated into stars: there is a total of 5 stars that can be achieved for each level. At the first you get 250 silvers; at the second 1000 silvers; at the third 100 XP; at the fourth 1 gold and finally at the fifth 5 Command points.
On of the most important things you need is S.H.I.E.L.D. points. You can't really do anything without these. You can receive these from friends who'll send you them for free. Biggest problem is that you can only get 50 gifts a day and these points are needed for everything: advancing your heroes in levels, research and so on. Another way is by visiting your friends' maps and collecting them from there. Your heroes only get stronger if you advance them to the next level and besides the points you'll also need money. After every combat won you get some silvers, or by selling useless items you achieve during fights, but you can also get them from sending your characters to remote missions from the helicarrier.
As you advance you get the chance to research many items which then you can then buy cheaply at the store. As I said, you need S.H.I.E.L.D. points and money for these researches. These take up from 30 minutes to two days, but after choosing one you don't need to touch it until it is finished.
The best part of the game and also the worst one, is that you have an energy line that is used up after 6 battles. This means that you must turn the game off for a couple of hours for the bar to refill. This is a great opportunity to send your heroes away to earn XP for themselves and money for you. However, if you haven't gotten tired of the game yet, you can always play PVP - combat against other players all around the world (as in people who are far wiser then my friends!).

Anyway, the free items are pretty cool and discovering you heroes and the joy of beating the bad guys is overwhelming. I have been playing for almost four months now and I enjoy every second of it. I have completed all of the first three chapters so far (5 stars on all 5 levels). And have recruited most of the heroes I love and cherish. The more heroes, the more stronger you are in PVP, so I am looking to get as many well known and strong characters as possible.
Also, there are Special Ops! available during which you can achieve limited items. But it is impossible to finish it without friends so make sure you get them to play the game with you and soon! All the other things you should find out yourself - if I got you interested so far, trust me, you won't be disappointed a bit!