(this is also a book review!)

I always enjoy books that are adapted to comics. Mostly because I hate to read... I just like the pictures telling me the story. Marvel, just like any other comic company tries to make more and more book adaptations. One of the examples would be Jane Austen novels, like Pride & Prejudice; I have a copy of Sense & Sensibility. But I have seen several Shakespeare plays adapted as well. 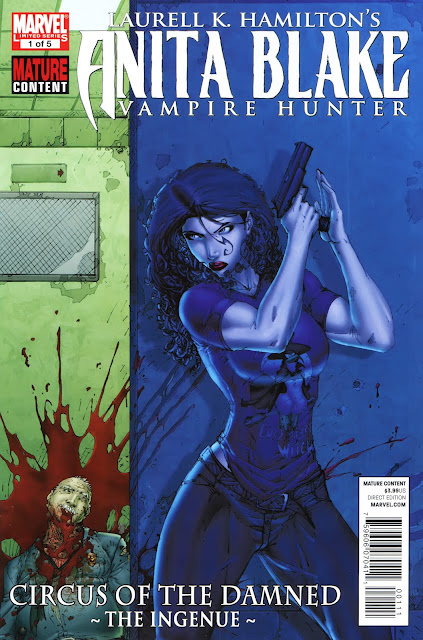 The one I want to talk to you about now is sort of a pre-pre-pre-pre-pre-predecessor of Twilight. Actually, when summing up they sound very similar but really there is no resemblance at all! Trust me!
The books that the comics were based on were written by Laurell K. Hamilton (click here to see her facebook page!), with the first book of the series published in 1993. And the phenomenal success of the comic ended up in Marvel asking Hamilton to write a prequel to Anita's story that was only published in comics, and not in books.
If you have not heard about her, I am not entirely sure you live on this planet or that I wish to have anything to do with you... but I would like to recommend to you some really great comics so let us discuss her in more detail.

The story has evolved into several branches, but the main concept is that:
Anita Blake is a vampire hunter. Or at least she is said to be because of the number of vampires that met their fates at her hand. Legally she is necromancer who raises zombies for money. She is also a supernatural consultant for the police, so the stories usually involve some sort of murder mystery. 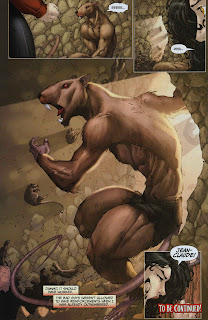 The most important and recurring characters you need to know about are: Jean-Claude, the master vampire of their town, who got this job thanks to Anita killing his master. Second is Richard, a werewolf who is an elementary school teacher during the day and the leader of his wol fpack during the night. Third is a parter/enemy of Anita's, another hunter who's nickname is "The Death" - he is Edward. We never really discover anything about him, he is sort of a psycopath, yet you really get to like him as he is the only character who you can support by the end of the books... either way my favorite book featured a storyline where we get to find out more about him, so that was good. Fourth and fifth are Dolph Storr, and Zerbrowski, two police agents whom are colleagues of Anita. Finally the more important characters that are worth mentioning are Micah, a were-leopard who becomes Anita's boyfriend; Ronnie, a private detective who is Anita's best friend and finally Nathaniel, one of the were-leopards whom Anita is taking care of. 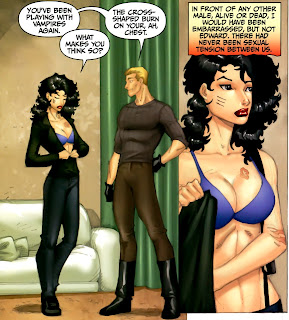 Anita initially hates vampires and monsters. Until she encounters Richard and opens her heart to the possibility. At that point Jean-Claude cunningly sweeps himself into her heart as well. Seeing that Anita and Richard have a destructive relationship and they can't seem to find that fine line between love and hatred, the two broke up. But things aren't that easy, seeing that Anita had received an important role in Richard's wolf pack as well as becoming the leader of the were-leopards pack. This is were Micah comes in. Hers and his pack are quite small and very defenceless, therefore the two decide to join forces - not to mention that Micah appears to be the only person who doesn't despise her for her insatiable lust for hunting and killing. So far Anita appears to be the centre of the universe in both the were and the vampire world. And this wouldn't bother me this much if Ms. Hamilton hadn't forgotten about THE MYSTERY PART!!
I used to love these books... my friend told me that she started hating Richard because he is a wining asshole, but I hate Anita far more! And the sex... god, I don't care! There was a chapter where the writer talked about Jean-Claude's clothing for four pages! I SKIPPED IT! And the mystery? At the beginning of one of the books we find out that someone from out of town is here... could he be the murderer? Oh wait, he is... how fucking original!

As far as the comics go, we are in luck because they are adaptations of the first couple of books: the good ones. The ones that had me shiver with excitement, the ones that left me scared and curios... you know, longing for more! I seriously only read these books now because I want to know how it will end! I couldn't care less any-more about the story and the characters and I just hope that Edward will return soon!
The books that are adapted are Guilty Pleasures, The Laughing Corpse and Circus of the Damned with the addition of the prequel titled The First Death. 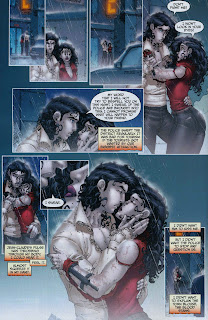 The books would be heavily R rated, going on R18... but the comics, as graphic as they are, are nowhere near as horroristic as the images, e.g. I made up in my mind while reading. I agree that it should be classified for a mature audience, because the stories are quite heavy. Not taking for granted that it features every mythical creature that you are afraid will crawl into your room at night in the dark and eat your face! And I literally mean ALL of them! But all and all you will learn to love these characters not only because of their bad-assery, but because you learn that deep deep down, behind that thick layer of sociopathism and psycopathism they are just people. (are these exsisting words? Oh, never mind, you get them!) From the vampires all the way to the actual humans.
I would also like to point out that although it has become a generic fact that vampires have feelings too, this book captures perfectly those kind of vampires that don't care! You were made to give me blood so I may become your God. -> that is generally how a vampire should think. And it keeps it real: garlic, holy water, crosses, sunlight - every rule written down in the big book is kept. No stupid exceptions, no magical rings or sparkling!! (if you get these references, you are cool!). They have pale skin, super strength and everyone has one special and unique ability that others don't. It is literally perfect.
But not just vampires, the same rule applies to zombies and were animals. Hamilton knows her audience and that is extremely gratifying. And even though I am not much of a fan anymore and I skip several pages that really don't go anywhere... I still love Anita and this world. And I imagine that many fans do like the changes made with the characters! I don't assume that the people keep buying it for the only reason that they want to know the ending - like me.

To sum up, if you loved the books and you know that a TV series and movie would simply and literally just ruin your favorite characters, but you still long to see them in a whole other adaptation: then the comics are for you. The best lines; the best stories and the whole origin of who Anita is; the version of hers we fell in love with is all here! It is truly a great graphic novel EVEN if you don't know the books! Check it out!

Here is an awesome cover of two great Marvel characters meeting, wouldn't you like to see a story with these two? :D 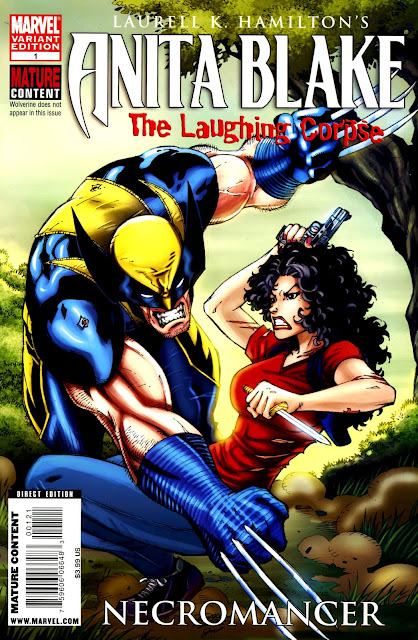