I was born on June 1st, sometime in the 90's, but my heart has always taken me back to the 80's. The good old American 80's! I listen to Cyndi Lauper, George Michael, Bruce Springsteen and Phil Collins. And my absolute favorite movies include Staying Alive, Dirty Dancing, The Breakfast Club and of course my biggest favorite of them all:

I was just about to celebrate my 16th birthday when I saw an episode of Scrubs where J.D. says "It was just like that scene from Sixteen Candles.", and I went, what is that? So I got the movie and I decided to see it on my birthday. And I loved it! I already knew the lead actors from other movies of mine, but mostly I loved the story. 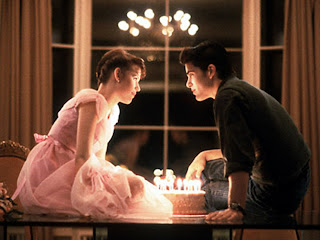 Samantha has the misfortune of having her birthday the day before her big sister's wedding. As a result her whole family, from parents along with her siblings all the way to her grandparents, everyone forgets about her sweet sixteen. But that is not all: she has a crush on a boy in school, Jake Ryan. Except he is already seeing one of the popular girls, Caroline, and Sam feels that she has no chance. However, during a dance at their high school The Geek tries to get Sam's attention; he gets nowhere, but Jake notices and the two share notes. Turns out that Jake is very much interested in Sam while The Geek would rather go out with the popular girlfriend of Jake's (with whom he was planning on breaking up anyways). Finally Sam's parents realize how foolish they have been and try to apologize. After the wedding Sam stays at the church last and sees Jake waiting for her. She ditches her dysfunctional family and goes with him. Jake gets her a cake and tells her: 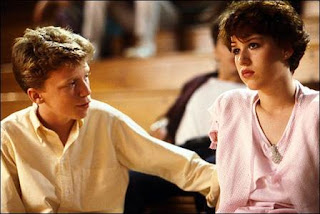 So ever since I was 16, every year I watch this movie on my birthday. Not only I love the directing and the editing, not to mention the very funny dialogues, it also touches everyone because really our biggest fear is someone forgetting our birthday (my best friend has done so for 3 consecutive years!). You can deeply relate to Sam: we all have that magical crush who obviously doesn't know we exist; we all have a crazy family who embarrasses the shit out of us, but we still love them because they are our family and we all want to have the best birthday ever even if we pretend that we don't care so much. It also covers every stereotype of kid in high school: the nerds, the geeks, the weirdos, the foreigner, the average normal unnoticed, the populars and the jocks. Meaning you can find yourself among the characters. And being the story itself a fairy tale, you find yourself rooting for the main character. All girls dream of prince charming, and after a shitty birthday like that, Sam even deserved it more than any of us, so there is a sense of relief when the two come together. Finally note is the music, which simply blows you away! The timing, the lyrics, all of it clicks perfectly together!


My favorite John Hughes and Molly Ringwald co-production movies all have this affect on me. Starting from Pretty in Pink all the way to The Breakfast Club. They are all down to earth and yet share a magic that brings the stories above all others. 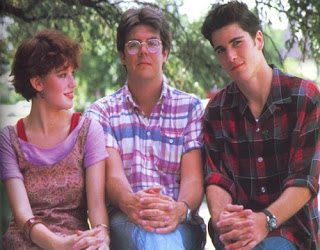 I also happened to notice that movies which story takes place within 48 hours, always appeal to me more. Another example of such would be Empire Records, even though that was made in the 90's.
Unfortunately I can say that this movies isn't for everyone. I can think of several people, even among my friends, who's humor isn't set for these kinds of movies. What can I say? We are a different generation. It is no wonder they keep remaking classics: they are trying to appeal to the kids of the 21st century! But there is a magic to the originals that cannot be compared to anything. I am sure that none of you will watch this movie just because I told you so, but trust me if I tell you that you will have a hard time finding something wrong with this movie! It is no wonder that such great shows like One Tree Hill made a whole episode just in memory of the wonderful John Hughes! He literally touched the hearts of every American, and then on everyone one the planet who had the fortune of seeing one of his movies.

Anyway, that is all I wanted to say, now I'm going to take a bit of time off, it is my birthday tomorrow and I have one more week of exams and afterwards it is full on Comics Summer! Don't miss out!

You all take care now! and, well