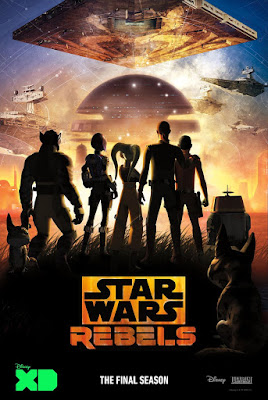 My best friend showed me a scene from the end of the third season, and immediately I decided that I have to see this. At first, I was not a big fan of the animation, but I have to admit, that it grows on you. Not to mention that as more money was put into the project, the better the animation became. The first season was reminiscent of the episodic space tales of Firefly (2002), the second was truly an homage to all those who watched The Clone Wars, giving us cliffhangers but also a long awaited encounter between Ahsoka and her former master. Whiles season three and four brought us the most beloved and feared admiral in all of the Star Wars extended universe: Thrawn.  Starring the wonderful cast of Ezra Bridger (Taylor Gray), Kanan Jarrus (Freddie Prinze Jr.), Hera Syndulla (Vanessa Marshall), Zeb Orrelios (Steve Blum), Sabine Wren (Tiya Sircar) and of course the best returning character, the lovable Rex (Dee Bradley Baker). 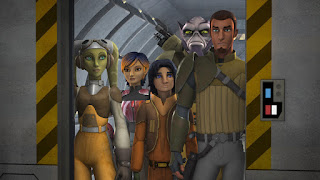 I have been thinking hard about what to write into this review because I don't want to and can't spoil things, I just really want people to see it. In regards to rumors about the future of The Mandalorian and the Ahsoka shows Dave Filoni said something about how Star Wars is not linear. And that stuck with me, because I watched this series before I saw The Clone Wars. So many characters returned, but they had a new face to them, a new approach through the eyes of the main characters of this show: the pirates, the clones, the Empire, all felt new but still familiar. And because they were all well established characters, they worked without Clone Wars too, and that is a testament to the writing of both this TV series as well as its predecessor.
So watch it? If this is the only thing you ever watch of the Star Wars universe, trust me, you will not be disappointed. This show was just four seasons of pure gold, the real heart of the Star Wars universe, the real depth of the genius of this universe, the creatures who live in it, the stories that it can tell... I will re-watch it everytime I can and recommend it to everyone.
Until the next item on my list!
Bejegyezte: CsorEsz91 dátum: 3:53 AM