What's Next On My List? Solo: A Star Wars Story 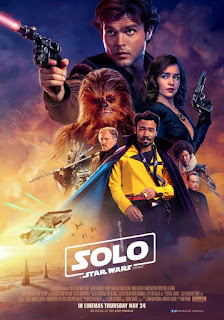 I took a long time to see this. I was not interested in the project at all, and somehow I felt that it was not gonna be the home run that they think it will be. First, I really hated that they moved to a May screening instead of the usual December, which has become the biggest grossing season for any new Disney movie. That said, having now seen it, I decided not to tell you much about the plot, because I myself did not know a lot going in, and well, I think that is part of the magic of the movie. I definitely would recommend that you watch it and go in wanting to have fun, and trust me, you will. 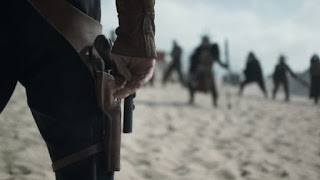 What worked? The visuals and the colors in this movie are effing fantastic. I loved that they did not go to a single boring planet from any of the other cinematic movies. I also loved the casting, nothing against Alden Ehrenreich (Han Solo), but he had to play someone too iconic unfortunately. That said, he committed to the role, and all the other people in the casting were just wonderful. Everybody committed and it was not just a paycheck, that is clear. I love Ron Howard's movie, he is a fantastic director. The music was great and the heist itself was smart and well delivered. And most importantly, the movie was heavy. It really was. It did commit to giving you depth - something that the new trilogy refused to do. The minute there was something serious, IMMEDIATELY they lit up on the tension, and the movies greatly suffered for it. This film... this film was no shy of tension and depth and it was simply wonderful. I even liked the implied background and the way the characters' backstory was rewritten. My favorite was definitely Lando Calrissian (Donald Glover)'s droid, L3-37 (Phoebe Waller-Bridge), she was just so much fun. The best character and droid in the Star Wars universe by far. If Lando ever gets separate stories, I hope to see her again. Finally, I did not want to see a movie about the Kessel Run, and in fact, it was not, and I am eternally grateful for that.
"- Just did the Kessel Run in 12 parsecs.
- [Chewie growls].
- Not if you round down, buddy." 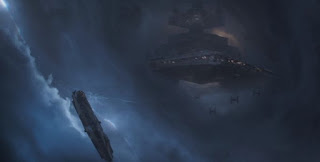 What didn't work? Unfortunately this movie committed the same mistake that DC movies do: they think that their audience is stupid. And Disney is not like that usually, so that made me enraged in more ways than I can say. There were at least 5 scenes where I felt that there was a huge neon sign blinking over the head of the characters saying "FAN SERVICE, THIS IS A REFERENCE, DID YOU GET IT? LET ME EXPLAIN TO YOU SOME MORE." Oh he needs a fast ship? Oh he is 'alone', perhaps his name could reflect that? Oh he thinks Chewbacca is toooo long and wants to use a nickname??? And all of these were just stupid, because you did not need to know about the extended universe to understand any of the reference. The one I hated the most was when Qi'ra (Emilia Clarke) started to introduce a smuggler - which we all knew was going to be Lando - and she starts to say how smart and sexy and attractive he is and ... make Han jealous by showing us, he is jealous and do not tell us viewers what to think of him. I spent the last 130 days watching over 230 movies and the biggest mistake any can make is to tell and not show. Movies, visual medium is supposed to show not tell. And this further explanation of the most obvious things was super annoying. Somebody came into the writing room and convinced everyone that the audience is stupid. And it is a real shame, because if I could edit out all those stupid scenes this movie could be as good as Rogue One (2016).
So watch it? Most definitely. I think it is a super fun heist movie set in a universe that we love and cherish. It is really a shame that Han Solo is so engraved in our heads, but there are a lot of people behind this project that really wanted to do their best and it shows.
Until the next item on my list!
Bejegyezte: CsorEsz91 dátum: 11:36 PM