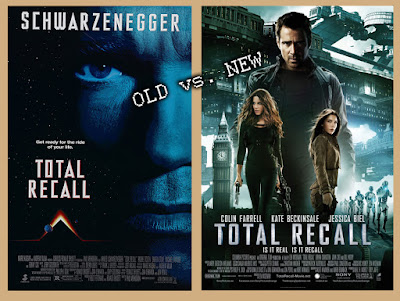 Quaid (Arnold Schwarzenegger/Colin Farrell) seeks a more entertaining life, so he decides to visit a place that implants memory. Being burdened by the weight of a dream, he asks to have the memories of a spy. However, he awakes to have had memories supressed already, of his true secret agent identity, that of Hauser who completed missions for and against the government... or did he? 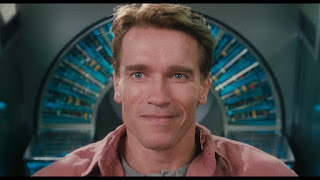 These are based on a simply magnificient short story by Phillip K. Dick, entitled "We Can Remember It for You Wholesale" (1966), which I recommend everyone reads before or after the movies. I really enjoyed the first movie, although incredibly disgusting at times, I was super happy that I watched it in daylight, it was one of those early sci-fi movies that needed a remake. First, taking out the disgusting elements worked to the benefit of the remake. Second, having his presumed wife Lori Quaid (Kate Beckinsale) also be the lead agent was a great move. In the original she was played by Sharon Stone, but she passes away and a male agent is the one to go after Quaid. There was really no need for the addition of another nemesis and I loved Beckinsale in this role. She was one to look out for. Against Melina (Jessica Biel), she was a force to be reckoned with. Then, I really loved the world constructed in the remake, as the original had a lot of secrecy and mystery about it, and in the end I craved more or a twist. The remake also allowed for the illusion of this all being just one big implant present for the viewer, and that too was very smart. The enemy, Cohaagen, first played by Ronny Cox (basically reviving his role as corporate bad guy from RoboCop), was then played by Bryan Cranston, which was a great casting decision. He just wants absolute power, and by introducing an army of robots, this remake also took us to another side of sci-fi movies, with artificial intelligence instead of aliens/mutants. I think that is just such a smart re-write, as these movies can co-exist and bring forth two great adaptations of a fantastic short story.
So watch it? I do believe that both are exceptionally smart movies. One takes you to outerspace, the other showcases our world in a way that we have not yet seen. Visually stunning, smart and great concept, making you wonder about the plot over and over again, with two great actors being cast in the role of Quaid.
Until the next item on my list!
Bejegyezte: CsorEsz91 dátum: 4:58 AM