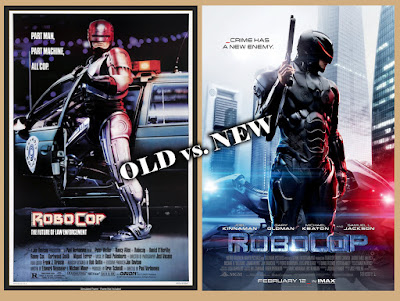 Murphy (Peter Weller) is almost killed by a group of thugs in crime ridden Detroit. He is then turned into a half robot, more of a robot actually, than human for a good while, as corporations fight over who had the best idea to clean Detroit of its filth, as the police is planning to strike. Murphy not only gets the bad guys that almost killed him, but stipulates that having a brain and a heart, he is superior to any machine meant to protect and to serve. 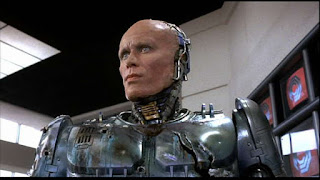 This movie had two sequels, which I am yet to see, as I was little impressed by the first one. Sorry, I said it... this movie has probably the best music ever, which is a tall order, as 80s science-fiction movies have some of the most famous themes in movie history. But the conflict between the corporate moguls did not interest me, and ultimately this is a revenge fantasy, which I do not think is the right way to go about it. Murphy was in there all along, but the movie forgot to show us any of his personality, thus resulting in me not caring about any of the characters. Now, this problem was mended in the 2014 re-make, starring Joel Kinnaman as Murphy, who has a special bond with his best friend, partner, his captian, as well as his wife and kid. The movie took the time to make us care about him, and that was crucial. The corporations abuse of power was incredibly well constructed, having Michal Keaton and the delightful Jennifer Ehle heading the program that made RoboCop. Not to mention, that Keaton's character Raymond Sellars, showed that he might be a corporate asshole, but there were layers to his personality; and his interactions with Gary Oldman's Dr. Dennett Norton where just incredible to watch. This movie had formidable casting. Finally, most memorable, is how Murphy slowly gains back his humanity, even when the robot brain is supposed to take over. Now, for the original, Murphy had an endearing partner, next to a sub plot of police strike and what not, but we never meet his family, his kid, we never get a chance to connect with him, as I said. His partner (of one freaking day), Lewis (Nancy Allen) is the one who gets him back, and there was no real good explanation as to why that partner cares so much either. To me, the first movie is a series is of images, while the remake is a story of a man inside the machine, and the focus IS on that man.

This remake only has a 6,1 rating on imdb, but to me personally it expanded on all the things I missed from the original. Watch it? I believe that if you are a fan of the movies of the 80s, you need to see the original first, but as far as remakes are concerned, this is a really good one, with an all star casting, that might have fallen short because the nostalgia of a trilogy of RoboCop preceeding it influences a whole generation. To me, because it wasn't that significant, I managed to enjoy the remake far more. Overall, there are some awesome sci-fi movies from the 80s that deserve to be made with much better CGI and choreography, and this definitely applies.