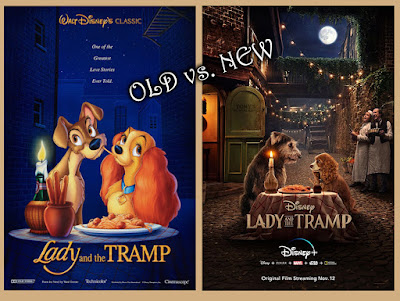 A house trained beautiful dog, Lady (originally voiced by Barbara Laddy), makes friend with a stray running around in the city, Tramp (originally voiced by Larry Roberts). Now, I grew up with this cartoon, I was super scared of the scenes with the rat, and for the longest time I did not get either why that is the villain... but of course, as you grow up sanitary concerns become clear in period pieces. That having been said, this has become a beloved Disney classic, so is there a need for a remake? 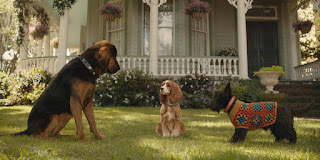 Now... I have been following live-actions... that is not true. I hate them and see absolutely no reason for them, and with each they make changes that are completely unnecessary. THIS MOVIE IS THE EXCEPTION. Coming out when Disney+ launched in the Autumn of 2019, it was completely off the radar, and hardly anyone talks about it. And yet, this is the best Disney live-action to date. First of all, the diversion that Hollywood is trying to integrate is perfectly included in this movie, with Darling played by Kiersey Clemons, her Aunt Sarah by Yvette Nicole Brown, as well as Lady being voiced by none other than Tessa Thompson. They fit in perfectly in this imaginary roaring 20s. That is followed by how the world was opened, how when Lady leaves her backyard the Tramp (Justin Theroux) shows her different colors and feelings, and in return, the Tramp experiences real care after years from two incredibly endearing characters, such as Darling and Jim Dear (Thomas Mann). This live-action might be shot by shot the original, but it still fixed a lot of issues that might make a cartoon from 1955 outdated for some. I keep listening to reviews of live-action Disney movies, and how they are trying to elevate originals, in order not fix controversies, which then simply yields films with horrible plotholes that just end up raping our childhood memories. Not this one. I am telling you, this is the best live-action movie out there. The cast is unique, the voice actors are great, the CGI on the dogs is simply spectacular (and I can only imagine their budget as this was a straight-to-stream release), the scenery and period accuracy was spot on, and overall I just felt really good when this movie was over.
So watch it? Absolutely. Ever since I saw it I have been raising people's awareness and recommending it left and right, because this movie needs more people to see it. And due to the super scary scenes with the rat in the original cartoon, I might just show this to my kids instead... it was so endearing and so well done. The CGI department alone deserves awards for this.
Until the next item on my list!
Bejegyezte: CsorEsz91 dátum: 4:55 AM