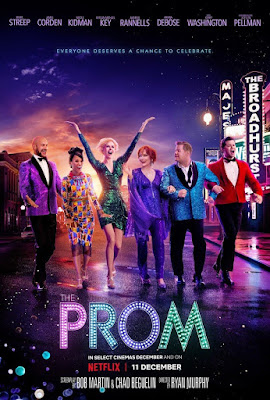 Four struggling actors from Hollywood decide to take on a good cause to get the papers talking about them again. They end up helping a girl named Emma (Jo Ellen Pellman), who cannot go to her school's prom, because she wants to take a girl. In their attempt to be fake good people, they actually put their own egos aside and grow with the main character.
Let us go in order. I just love musicals, a good musical can take me away with the songs. If you do not like songs in a movie, why are you here? Why are you reading this? Go away! I hate comments like "good movie, but too much singing" oh my god man, look up the definition for musicals! I love the singing and the dancing and I cannot emphasize enough how much better everything is in a musical. That said, there are some out there that I did not love, and I deem to be in need of fixing and readjusting, so I can be critical, but I am also biased. I find that as long as you own your biases, you will be fine. So let us go into the review: 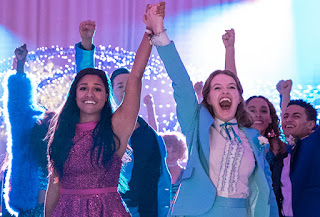 No. 1: Jo Ellen Pellman was a great lead for this movie. Terrific young actress with great singing voice. The clothing department dressed her in very hipster clothes, but by making her be the only character in her school with this style, there was a kind of "she's THE lesbian" vibe to it, which was really silly. And I want to start off with this, because I have something very particular to say about the LGBTQ representation in this movie. So point two:
No. 2: James Corden's portrayal of Barry Glickman: it was really fantastic. I read a lot of reviews bashing him, and people are idiots. I do not care that some believe this kind of feminine gay men to just be a stereotype, because I have met people like him in my community, exactly like it. As a student of minority representation in Hollywodd, I can tell you, that there is a basis for certain kinds of stereotype. But as a member of the LGBTQ community, no, I was not offended by a straight men playing a gay man. Now, we can argue, that the role should have gone to a gay actor, well, that is true, if they favored James Corden because he is straight - but there is absolutely no evidence of that. Not to mention, that the cast did have openly gay and terrific actor Andrew Ranells as Trent Oliver. I honestly believe, that there was no ill intent here, and although I WANT more diversity and representation in Hollywood, I also want actors to play any kind of character. The same way I loved the cast of Hamilton (2015), the same way I loved Taron Egerton in Rocketman (2019), that is the same way I'll love a good actor doing a good job. I will die on this hill: James Corden did a terrific job. 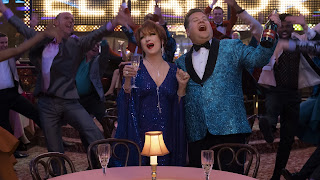 No. 3: I really felt that Nicole Kidman, playing Angie Dickinson, was underused. We can argue, of course, that that was her role, and being part of the supporting cast on the Broadway stage, she was also the supporting cast here, so overall, we got what we were promised. Nonetheless, there was more star power.
And finally, No. 4: Meryl Streep playing Dee Dee Allen... oh my god. She was just supurb! We all know she is great, but this character had a lot of layers to it, and I just love Streep in a musical. She was selfish, she had a character arc, she had a love story... the whole deal. My favorite part actually was that she started to date a younger man, Principal Tom Hawkins, played by Keegan-Michael Key, and it perfectly made sense. They connected, they were cute, she opened her heart to a man, which was not easy for her. I particularly enjoyed it, because another criticism and trope Hollywood is trying to break, is having older male actors having young female co-stars as the romantic interest. Here you had the reverse and one, I did not think that the age mattered, 2, you need to trust the script to take you on the journey with it. Women in Hollywood should not be looked down of for aging... honestly, the older the sexier!
So watch it? I really wanted to write this review because I heard a lot of controversy around this movie, although all it did was adapt - very marvelously - an award winning Broadway show, whose casting nobody was interested in, yet they did not hold back when it came to James Corden... I really want everyone to see this movie because it is an endearing story, and I personally might never get to see anything live on broadway and thus am happy to have this be available to me when I want.
Until the next item on my list!
Bejegyezte: CsorEsz91 dátum: 2:34 AM