Since I have to be at home (all the time) I decided to take this as an opportunity to go through my bucket list of famous franchises that I never got around. One of those was The Terminator movies, and I do have a couple of thoughts. Instead of having a review per movie, I decided to put them together as it is much easier to analyze them by comparing them to each other. So let us dig in: 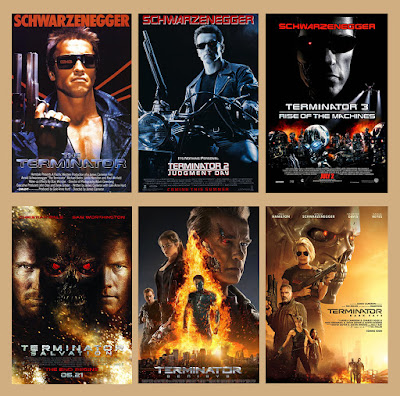 The Terminator (1984), starring Arnold Schwarzenegger as a robot sent back in time to kill the mother of the human resistance, Sarah Connor (Linda Hamilton), is one of those early sci-fi movies that deserved a remake. That did not happen, because its early success got it made into a major franchise, and it is a good thing. I do not think that the first movie aged well (I totally did not fall asleep almost ...), but for the exception of the ending in the factory it was quite forgettable. I love movies from the 80s, but technology has advanced quite a lot and a lot of remakes and rebooths gave justice to the original idea, which was quite unique. There are hundreds of stories about futures where robots take over, however, had this not been unique in its style and plot, it would not have survived, as it was the case for a lot of 80s scifi movies. When it comes to Terminator 2: Judgment Day (1991) I can tell you for sure that it is one of the best ones of the series. People loved it and I do not think that we would have had the franchise we got, were it not for this movie. I find that the best thing the script writer realized he could use to his advantage, was noticing the popularity of Schwarzenegger, and making him an ally instead of an enemy. I do not feel the need to go into a big review here, the main character is young John, who reconnects with his mother after realizing that her fear of the future is more than justified. And his good relationship with this model of the Terminator is essentially what leads to the third movie. 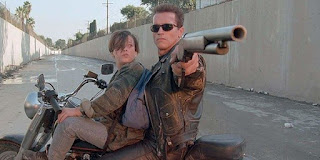 Terminator 3: Rise of the Machines (2003) you all know what I am going tosay, because we all know what is wrong with this movie: the casting. There is no excuse for this. And I do not want to be mean to the main actor, I have seen some of his work, and he knows what he is doing, but pairing him with Schwarzenegger and Claire Daines was a major mistake. It was just maddening, because frankly, this would have been my favorite movie of them all, as the evil terminator got me shitting my pants, while the good one managed to be both the hero as well as the comic relief. Something incredibly hard to pull off... my favorite scene has to be from the beginning, where he gets the clothes of a performer at a women's bachelorette (I'll link it below), and all along the movie had heart. A lot of heart. But there is only so much suspension of belief when it comes to the saviour of mankind being... capable. His recast was imminent.

Terminator Salvation (2009) was not received well and I can tell you that people are f*cking idiots. This movie was simply fantastic. While watching the first three movies me and my partner looked forward to seeing the horrible post-apocalyptic world that seemed inevitable. And we LOVED IT. It was everything you would not want your world to be and more with effing outstanding casting. I was scared but intrigued and scared some more. It was simply wonderful. Would I have liked for the real Schwarzenegger to be there? Sure. Did I still enjoy every second of a story that encompasses what makes us separate from machines? 100%. I am very upset that the timelines decided to "cancel" this movie, because it really needs to be revisited by... everyone. (Shout out to my best friend who told me that it is good, you were right buddy, you were right as always!) 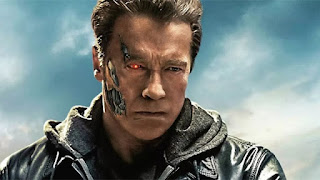 So where to go from there? Well, we can either see how John Connor then used the time machine - the one that brought back the first terminator from the original movie - or we could see another chapter of the post apocalyptic world. The answer was closer the to the first, with the exception of also erasing movie two... and thus Terminator Genisys (2015) was born. I don't get that. As I said, movie four was not bad at all, but you know what made it even better? The fact that this one tried so hard to erase it. I am endlessly upset with this movie. So f*cking mad that I don't even know where to begin... first, my rage stems from the fact that is was NOT a bad idea, actually, it was quite genius, I love, that since we are pushing off Judgment Day, as a result technology is also advancing, and by the time Skynet takes over it is incomparable to its variant presented back in 1984. I also love the idea that the stupid flock of sheep that humanity has become can be so easily controlled "We won't tell you what this is, but get it for your phone!" and then humanity was like "OK!". The satirical element in this movie is simply wonderful. But as far as good things go, the plot, Schwarzenegger and Emilia Clarke are the only three items on my list. With our male lead Kyle Reese... this movie went as far as remaking the first few scenes from the first movie, frame by frame... but they decided to cast a guy three times the size of actor Micheal Biehn and I DO NOT UNDERSTAND WHY. It got me disconnected from the movie everytime poor Jai Courtney was on screen, because aside from the color of his hair (not even the shape of it), he had nothing in common with the actor who made this role famous. It was enraging. He did and OK job, he had good chemistry with Emilia Clarke too, they were not a bad pair I can see them reading the lines together, but when you make so many hints and references to the first movie, I cannot believe that you could not find someone who had at least the proportions of the original Reese... you know, someone like Matt Smith, who WAS part of the cast and got a total of three scenes??!! What are you thinking movie?? And this was not the only mistake in casting... then they decided "hey, let's cast an actor that we only cast as a villain in every movie ever and make him John Connor. NOBODY WILL SEE THE TWIST." But we did. It was in your face all along. There was not one moment where I cared for this John Connor (and not because Jason Clarke is not a great actor!), despite having seen 5 movies with him being the lead. I do believe that having Christian Bale him and having him turn bad would have been sooo much better for this movie. Not to mention, that I felt lost... the only hope for humanity is this one person, making him an antagonist felt like there is really no point in trying to fight this evil machine. 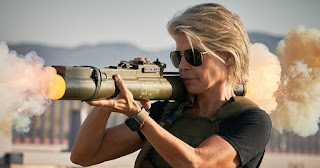 And once you have so many movies determined to have me care and believe that there is hope for humanity yet... taking that from me is not a great idea. At least, I thought so until I got a movie that actually did it right: Terminator: Dark Fate (2019) I did not think that it was possible, but movie six was the best. I cannot think of a single mistake with the plot. I just had my mouth open the whole time and was excited and intrigued and even if I knew what the ending would be it still made it incredibly entertaining. Linda Hamilton's Sarah Connor was simply f*cking badass and entertaining at the same time. Her sarcasm and devotion to a cause after having lost her son - whoops spoiler - was outstading. However brought her back to the series deserves and award, because this basically all female cast was the biggest gift I could have asked for, following such good stories as Captain Marvel and Wonder Woman. To everyone in the back: YES, we do want MORE female heroes!

So watch them? I honestly think that to appreciate them all you need to see every one of them, even if the first one did not age at all well, I'm sorry, but it has to be said. And I do believe that the last one, with its strong message of women being  powerful and humanity always having another figure to follow that will not give in to the despair, was also the strongest. Great casting and just... there is no amount of Schwarzenegger and Hamilton that I could say no to.