Since I have to be at home (all the time) I decided to take this as an opportunity to go through my bucket list of famous franchises that I never got around. One of those was the Mission: Impossible movies, and I do have a couple of thoughts. Instead of having a review per movie, I decided to put them together as it is much easier to analyze them by comparing them to each other. So let us dig in: 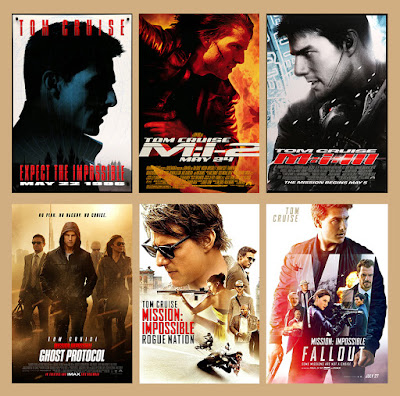 As probably one of the most beloved franchises out there, with Tom Cruise's Ethan Hunt, there isn't a lot I that hasn't already been said about these movies. I effing loved watching them and I will probably rewatch them many times in the future. However,  a few thoughts did come to me, that as far as I can tell, very few reviews discussed, so let us dive into them. The first movie, Mission: Impossible (1996), is from an era that has not yet developed what I would like to call "modern action movies". These, in an attempt to let the audience to breathe, allow for small comedic elements that work as a release valve and let everyone, on and off the screen, take a breathe. The first movie was action packed from the get go, and it probably has one of the best misleading opening sequences to this day. It was very serious, and it was also grounded in reality, no big fight scenes, no forced sex scene in the middle of the action. I also loved the quiet scenes... I forgot to catch my breathe to make sure that I do not ruin the mission for Ethan. But, the problem for me was with casting... and that is an issue that persisted so far in every movie that I have seen, as each one had one horrible miscast. In this first one: Jon Voight playing Jim Phelps. I understand that these spies need to have the ability to blend in, but he was just too unbelievable to be such a great agent to pull of this whole thing... he commands respect and he is older, yes, but that age difference made him too unlikely to be good at what he does and he was just laughable. 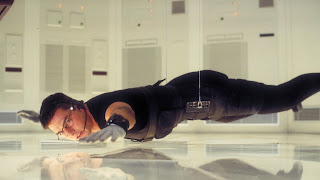 This seriousness that I told you about was somewhat let go in the next installment, unfortunately, it backfired. Mission: Impossible 2 (2000) is probably the worst of the series. The main reason, in my opinion, being that it is just over the top. Of course, all of these movies have something impossible to them, and as I complained about the villain, let me tell you that having another spy that was as young as Ethan made it a whole lot better... but I would still argue about the casting, because, had it not been for subtitles, I would not have understand a single word that came out of Dougray Scott's Sean Ambrose. I just... I still have no idea what accent he was speaking in. Was that Scottish? And having him talk with Australian actor Richard Roxburgh (Hugh Stamp) was just the worst decision on everyone's part. Having a movie question my English skills is not a good time... I appreciate the choices in casting but for me it was another miss. [Author's note: this movie also had a horrible rape scene, where the main actress, played by wonderful Thandie Newton, went back to the bad guy and had to force herself to pretend to like him. All of her struggle, instead of being voiced, was framed as if it was Ethan who fell victim to the plan that they executed and that is some major bullshit... I hated that part of the movie and it is exactly what is wrong with story telling that focuses on a male character. And thankfully this changed in later movies.] 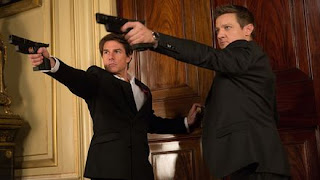 Mission: Impossible III (2006) is where I think that the movie really found its groove. First, it finally succeeded into this new era of action movies that allow for comedic elements and also enhanced who Ethan Hunt really is. Luther, played by Ving Rhames, is a constant in Ethan's life, probably the only one that will stick it out till the end, and I actually love his dynamic with the character (not to mention that Tom Cruise has chemistry with anything on screen), and still, it was movie three that I think really started this franchise all over. Second, Ethan Hunt is ultimately America's James Bond, and if you look Pierce Brosnan's 007 movies in order of release, and the M:I movies, you will see how they inspired each other to keep kicking up the bar for spy movies, and you can tell that the Daniel Craig series takes it to a whole other level. But Ethan is not a womanizer, he is a one woman guy, he is a teacher, a friend, and a husband, not to mention a patriot till the very end. Movie three established how Ethan's character can evolve and give us so much more, and for that I think it is really the first movie of what the franchise has become. I told you all in the beginning that there was issues with casting in all the movies, well, here I feel that Jonathan Rhys Meyers was not really used to the best of his abilities. He is a great actor, and I would have loved to see more of him, like we did with Renner, so let us get into the next movie. I do think that my favorite was Mission: Impossible – Ghost Protocol (2011), and it wasn't even for the incredible stunts. Cruise has been pushing himself with every movie and his work is just outstanding, really, a lot of movies have to have actors who can do it all simply because of this franchise. And if you ever want to check out behind the scenes materials of major blockbusters, boy, make sure you start with these! Now, my favorite scene was the sand storm, because it left me without breathe just like the first movie did. However, every one of these movies tries to trick its audience and have really good twists, but having Jeremy Renner be another agent just did not cut it... you are not going to cast this person as an analyst and expect your audience to believe it... but that is only as far as the twist is concerned, a bigger issue was Paula Patton, Jane, the agent who ended up working with them for this unsanctioned mission, and who, was incredibly underused. She had scenes where she gave me shivers, and others that were utterly forgettable. I blame the director, but that is the miscast for this movie. 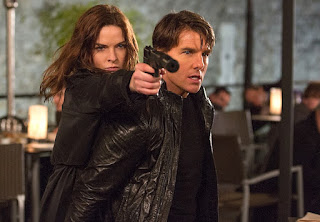 With both Mission: Impossible – Rogue Nation (2015) and Mission: Impossible – Fallout (2018), we are stepping into a whole new territory, as this movies are just... one better than the other. I loved Rebecca Ferguson's Ilsa, a character that needed opening up and thankfully she was in two movies already. I could tell that she had something going with Ethan, but I loved that the story took time to tie off his story with his wife and did not force something, because really, Ethan is NOT Bond. The way his character developed over the years is simply a perfect example of how franchises should develop around their main characters. But... as I told you, we have another issue with these movies and surprisingly both five and six shared this issue: the villain. I am sorry for Sean Harris (Solomon Lane), but I could not care less about him. Now, I loved that this organization was present for two movies, because otherwise it would have made the plot of the fifth movie feel shallow. Honestly, 5-6 feel like they were meant to be viewed together. And that just shows you why M:I is so unique. And yet... even if I understand that they wanted a villain that can be lost in the crowd, a spy that has a forgettable face, that is exactly what they got, someone I already forgot. And being the leader of such a huge evil organization, I expect them to be at least memorable to the audience. It just did not click for me... On the other hand, Henry Cavill (August Walker) was a wonderful casting, and someone I will probably never forgot, and showing us that Ethan had his showdown with him further emphasize that this villain was not as majestic as they would have liked us to believe.

So watch them? Obviously. I decided to focus on minor issues because these movies actually make us want more and want quality, a good story, good cast, good twists, good stunts! And because the bar is so high, and these movies put it there, that I felt the need to nit-pick and really get into it. I, of course, look forward to more movies and I want to see where Ethan Hunt's story goes, not to mention that of the recurring characters. And please, in future movies, can we just ONCE have the agency behind Ethan trust him?? I am so tired of him ALWAYS having to go against his own government to keep saving them. Take a note from MI6 agent M, a leader who always trusts Bond, creating a connection that extends to the audience as well... just how many more times does Hunt need to save the world for you to trust him?