Since I have to be at home (all the time) I decided to take this as an opportunity to go through my bucket list of famous franchises that I never got around. One of those were the John Wick movies, and I do have a couple of thoughts. Instead of having a review per movie, I decided to put them together as it is much easier to analyze them by comparing them to each other. So let us dig in:

John Wick (2014) seems like a simple revenge story, of a man who has lost literally everything, and then we slowly find out that he used to be the go to hitman for various mob bosses and that you do not want to get on his badside. I remember watching this movie when the third one came out and feeling happy that there are more movies to see because I was on board immediately. Keanu Reeves is a special person, somebody I deemed to be a wonderful actor all my life, and he made this character come alive. I really wish he would be in some more fun action movies too, like The Expandables, or really anything with Tom Cruise in it. This movie is a great example of why we need sequels for certain stories to be fully told. The world that was established in the first movie brought about a lot of questions, and I really loved the idea of having a code of honor when it comes to assassins, and I also liked that the universe created easy rules to follow and to adhere to. The more we found out about this world, the more curious I got. 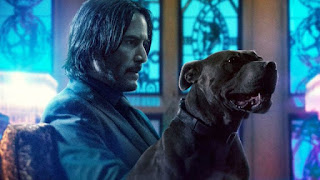 John Wick: Chapter 2 (2017) was probably my favorite. Growing up in Italy I followed the career of Riccardo Scamarcio quite closely and I loved to see him face-off with Reeves in this movie, and if you are expecting a big battle based on my review, well, then you need to watch it to understand what I mean by face-off. The Italian branch was very well constructed and I love how each country has its own version of the hotel and each one follows its rules. Each action movie franchise branches out into the world as they make sequels, they include at least three countries, mandatory for one to be in Europe, and then the final conflict takes the main character back home. Now, Wick is similar in that setup, but this organization is just there, it always was and it always will be, and going around the world feels like a logical decision for someone on the run. The fact that these movies can exist in the same universe that I am living in gives it an edge in my opinion, something that most stories use as a device to scare us, but here, we co-habit with assassins and the mob, rather than be terrified by them. And this mostly because the rules are taken seriously. 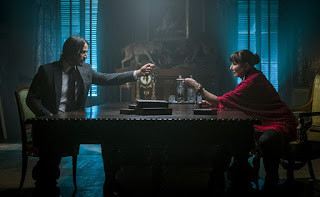 At the time when I am writing this review, we only had three chapters of this franchise, and I got to see the third one just a little bit after it came out. What I believe is wonderful about these three movies is that they are connected, but they work separately as well. John Wick: Chapter 3 - Parabellum (2019) had the best action sequences in my opinion. Reeves does a lot of his own stunts, and actually, his way of fighting is quite straight forward, it is a mix, and he does do some martial arts, but essentially he uses what he has, from cars to ranches to... pencils. I do believe that when you are good at something you don't have to have finess to it. Wick has his own style and that is a constant gem in this trilogy, and in the franchise that is still on going.

So watch them? I would be very surprised to learn that you have not. Most movies are stand-alone, but the MCU brought about the idea of having its audience want more and think of stories as chapters rather than separate books. Something that the titles of the Wick movies emphasize as well. And personally, I cannot wait for the other chapters.