Since I have to be at home (all the time) I decided to take this as an opportunity to go through my bucket list of famous franchises that I never got around. One of those was the The Bourne movies, and I do have a couple of thoughts. Instead of having a review per movie, I decided to put them together as it is much easier to analyze them by comparing them to each other. So let us dig in:

The Bourne Identity (2002) begins with someone fished out of the sea, a man, who later identifies himself as Jason Bourne (Matt Damon), and a long road to figure out who he is. He gets help from a student in need of cash, Marie (Franka Potente), who ends up being involved with him while he searches for clues on his past. And I really, I enjoyed his journey immensely. This is quite a unique idea for a secret agent and I was along for the ride. However... what agency was he working for? I have found it ridiculous that until the second movie, The Bourne Supremacy (2004), there was not even a plaque of the CIA, FBI, Homeland, counter terrorist units, nothing. NOTHING. Who the hell does Bourne work for? I couldn't shake the feeling that this was not deliberate, but an oversight, as one official immediately knows which branch of which organization to contact when he hears that an attempt on a foreign figure was unsuccessful (as we later find out, it was Jason who failed at his mission). He had absolutely no problem figuring out who sent that agent to carry out the hit, yet the viewers do not find out until later installations that there are secret project within the CIA that should not really be up and running. 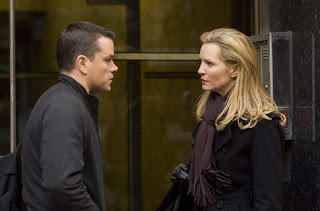 With The Bourne Ultimatum (2007) you had a perfect trilogy. I'll admit it, these three went very well together, but I am still upset at the first movie because the lack of information about the "agency". Mostly, because, the lack of information is something that seeped into the sequel that followed the trilogy. Nonetheless, the ending of the second movie (Supremacy) was tied into this one, and it left me with my mouth open. I really enjoy sequels that showcase how the makers know their source material. I enjoyed the music, the plot, the idea, the characters and I was there for the ride with Jason... but perhaps it would have been better to end it there... I would like to add still, that every time after movie one, people asking Jason "You really don't remember, do you?" just made me scream... have you seen what he done so far to get answers??? Have you seen his file which claims amnesia?? When he has a gun to your face and asks you what the hell happened to him, I think you can safely assume that he does not remember! 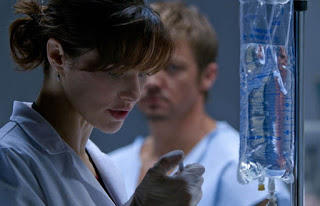 After all came The Bourne Legacy (2012) did not do as well, as one can expect, people did not want a story without its titular actor. Which is a shame, because movie three uttered that Threadstone (the project that made assassins like Jason), was just the tip of the iceberg. I personally incredibly enjoyed this side-chapter, especially because I liked the idea of a major conspiracy in the background and allowing us to have an insight, but I need to tell you, that there has to be a division between the story with the main characters, and the agency that was trying to eliminate them. Aaron Cross (Jeremy Renner) and Dr. Marta Shearing (Rachel Weisz)? Wonderful casting, wonderful chemistry, a slowly but steady relationship was built up between them and I cared and I loved every second of it. The action sequences were great (although seeing the stunt double did take me out at minutes, I would still like to thank them for their work #OscarsForStunts, because none of these awesome movies would exist otherwise), however... the agency... I was so goddamn pissed at the agency that tried to take him and everyone in the project out, because... WHY. OK, we see on TV that Jason turned on a chain reaction, these projects are getting shoved into the light and questioned by the right authorities, however, at the end of this it seems that everyone gets away with them anyway and that was simply enraging. The whole reason to kill of agents like Aaron, was to hide projects again, but then towards the end yet ANOTHER super secret project is mentioned to which one person says "That is up and running? I thought that was just a theory!", while the name of the project is WRITTEN IN LARGE FONT ON A COMPUTER IN THE BACKGROUND DURING THIS SCENE. *sighs audibly.* The whole point of the movie is to scrap evidence of something that nobody then has to pay for, nobody is brought up on charges, and Aaron himself does not care at all to stop it. Seeing three movies built on exposing the corrupt side of an agency meant to protect Americans was swept under the rug, completely undoing everything that Jason did in his trilogy. Again, take this movie and divide it into two: Aaron's journey was very entertaining and it made me crave for more, honestly, while the agency storyline was enraging and stupid, from casting decisions to pointless flashbacks all the way to zero consequences of the things they do to these poor agents under the promise of "You will be saving American lives". 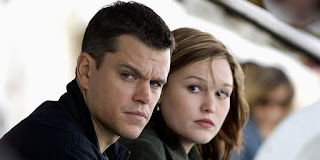 So we arrive to the last movie, Jason Bourne (2016), at least so far, even if I cannot really imagine what it would be like to continue, mostly because this movie was horrible. It really lacked ... everything I enjoyed in the other movies. The biggest issue was, that the previous movies took time to set up the side characters too. You could tell what each CIA director was thinking, you could tell the struggle in Pamela Landy (Joan Allen)'s eyes, you could tell that both Conklin (Chris Cooper) and Noah Vosen (David Strathairn) were scared of their actions, and Bourne, catching up to them. I felt zero connection to any of the characters represented in this movie: Robert Dewey (Tommy Lee Jones) was completely uneffected by the events, Heather Lee (Alicia Vikander) played both sides in a way that was not convicing from any angle, and the super secret agent or Asset (Vincent Cassel) was closer to a mass murderer than a spy. Ultimately all Bourne movies are the same: initial chase sequence, the calm before the storm, on or two agents who care for him and want to help him, a major car chase scene followed by a fight, ending in the awesome song by Moby. And yet, despite the same recipe, the last one fell short in every account. Not to mention, that them killing of Nicky Parsons (Julia Stiles) instead of having her be with Jason after you put your audience through 5 movies made me so pissed off that I don't think I will ever forgive them. What a waste of a brilliant character for a quick emotional jab at the audience...


So watch them? Well, the original trilogy, definitely. Really good idea, stil unique, it stands the trials of time. The "spin-off" was still very smart when it came to 50% of the movie, and honestly, I did not miss Matt Damon. The last one? Just skip it. All of them are on netflix, as far as I could tell, so, since you are also probably forced to sit at home, have fun re-watching them!