Very important note, before we talk about the movie.
Not one, but two people have now been charged with sexual allegations and misconduct. I do not condone people abusing their positions in society or in a workplace. I wish that they did not make an example out of just one famous person (like one of the actors in this very movie), but making sure that everyone gets their proper punishment if they are proven guilty. I watched this movie before the accusations came about, and I decided to write about it specifically so I could address this. I am still upset that people get away with horrible behavior and I hope that the world is headed into a better place, where no one in power abuses of others. But before that happens, we need to address these issues, not shame anyone for speaking out. Exactly that, showcasing that people will not be put onto a "blacklist" for speaking out against predatory behavior is the first step.
So, be strong, stand up, speak up, and know that you are not alone!

I will now say a few words about this movie, and that introduction was made to ensure that anybody who comes across this years from now will know that there are cases when you cannot take the artist away from their art. And sometimes you might just be able to appreciate the art for what it is. 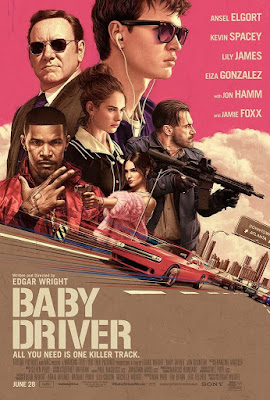 Baby (Ansel Elgort) is the gettaway driver for a man named Doc (Kevin Spacey), who organizes heists. One time Baby tried to take something from him, as a punishment he has to be available for any job that he is given. However, even after his debt is repayed, he cannot seem to shake this life without consequences.
I heard great things about this movie and I was very curious to see if it does live up to the hype. What I found was very interesting indeed: I have seen this movie before. I have seen the pacing, the intricacy, the bad guy getting up and getting up again, the bad guy, who is actually good, the love that sparks between the main characters (basically after they share a trauma) ... I have seen all of this in movies made in the 90s. What this film did was take narrative elements and the pacing of a 90s movie and just put it into next gear, along with casting people who are big names now. What I also found, that amazed me, is that all of my friends, my generation, never really went back to see those movies that they see scenes from on TV when they were young. I am a big fan of the 80s and the 90s, and I went back to a bunch of action movies and I did get the distinct feeling that this is something old. Funnily enough, others, found it innovative at a time when superhero movies are dictating action movie rules. 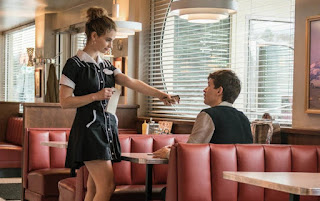 That having been established, did it not live up to its hype? Oh well, it was a great movie. I was intrigued and entertained, despite feeling like I know exactly where it would go. The reason I had fun in a strange way is that I found myself scared during several scenes. I had this feeling of anxiety in my stomach where I did worry about the health and life of the main characters. The movie got me to care in a way that was beyond me, because it did not use the good old fashioned methods (like focus group approved sad stories that pull on your heartstrings). The screenwriter gave me just enough backstory that I felt close to these characters and I was worried about my own safety. I cannot remember a movie that drew me in as much as this did in a long time. I do believe they had an outstanding cast and a very unique soundtrack, and that combination made this seemingly straightforward story very intriguing.
Watch it? Sure. It is unique for its time period for sure. But if you are an old schooler you will see that you have seen movies like it before. But it is an intriguing action movie with great character development.
Until the next item on my list!
Bejegyezte: CsorEsz91 dátum: 1:01 PM