This year there was not much to see at the movies, as everything has been closed since February. I was looking forward to some things coming out, but instead I want back to some that deserve another look. Either because they are good or because they did not age well at all... let's see where this one falls, shall we? 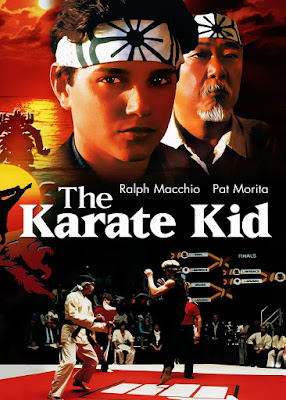 Daniel LaRusso (Ralph Macchio) moves with his mom and little brother move to Reseda, Los Angeles, to start a whole new life. But Daniel has a hard time fitting into his new school and ends up making enemies out of a group of boys who practice karate after school. As he himself discover karate, thanks to the help of Mr. Miyagi (Pat Morita), he decides to enter the local karate championship and ends up defeating his bully, Johnny (William Zabka). 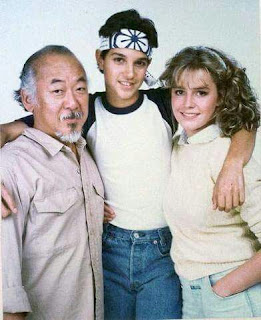 I grew up with this movie but had not seen the whole thing for a very long time. Me and my sister decided to watch it and well... it's not a good movie :D I am sorry, but it is two hours that has at best a 30 minute finale worth watching. The movie felt like it had one big scene that was repeated over and over again, with some drunk PTSD from Mr. Miyagi: Daniel has an argument with Johnny, they try to fight, then Ali (Elizabeth Shue) tells them to stop and calls Johnny names and we start all over again until the tournament. Sometimes Cobra Kai beats up Daniel, sometimes it is Mr. Miyagi who beats up Cobra Kai for Daniel. Really, other than the sadness of Mr. Miyagi's past, the whole movie got lost... and I can tell you that I understand more about it after watching the first two seasons of the show Cobra Kai (2018) that actually helped me understand what this movie was probably about... I am going to guess that the lesson to be learned is proper balance within one's life, however, the movie was about the underdog and you want to root for him. But it is very hard, because Daniel shows very little personality. If he stood out as the Jersey boy, maybe, but as funny as it was that the new show wanted to show us that maybe there are two sides to every story, I already felt that way just watching the movie.
Watch it? Well, no. If you are here you probably searched for anything to do with season 3 of Cobra Kai, and I can tell you that if there is anything you need from the movies is presented in flashbacks in the show. Yes, these movies laid the groundwork for the show, which very smartly keeps putting the two sides of the same coin in front of each other, but it lacks Elizabeth Shue! GET ALI BACK FOR THE NEXT SEASONS!!!
Until the next item on my list!
Bejegyezte: CsorEsz91 dátum: 10:52 AM