Summer is over, but I am not done writing about all the movies I re-watched. The quarantine left many looking for new content, I, on the other hand, went back instead. A story can be very different if you grow up and you are no longer just looking for a "happy ending" but for the story that leads there. I decided to talk a bit about all those movies that I re-watched during the quarantine, and will keep on watching this past summer. Yes, it is good to have new content to watch, but certain films really merit another look. 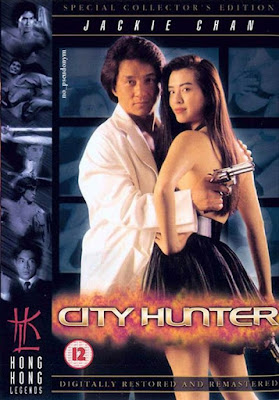 Ryu Saeba (Jackie Chan) gets hired for a private eye job with his partner Carrie/Kaori Makimura (Joey Wang). They have to find a girl who ran away from home, Kyoko (Kumiko Goto), and because of it they end up on a cruise ship that is about to be taken over by a terrorist organization lead by Col. Macdonald (Richard Norton). The City Hunter teams up with undercover cops on the boat and along with his partner find Kyoko as well as stop the terrorists. 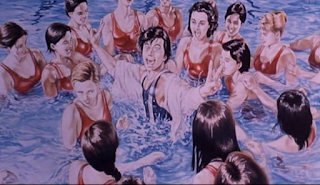 When I saw this movie for the first time I had absolutely no idea what it was adapting, my family and especially my uncle was a huge Jackie Chan fan so we just watched anything that was dubbed in Hungarian. A few years later, however, I got the manga of Tsukasa Hojo's City Hunter in my hands and I couldn't put it down. The story of this unlikely hero got a special place in my heart. So many years have passed since, and I still take it off my shelf and read it. I have seen many episodes of the anime, but there is something about the characters, and the story, and the love and the incredible yet possible adventures that they have, that always takes me back to wanting more. I even brought one of the manga covers to one of my school presentations, you can read about it here! That said, when I realized that this movie is the adaptation of my favorite series of all time, I decided to re-watch it with different eye. 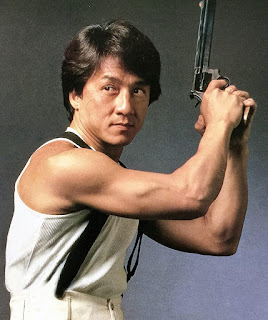 I was very critical, and indeed, this movie is very far from the original series, but I understood the changes simply because of the casting. Jackie Chan is not only a great actor, but after Bruce Lee, probably the most skilled fighter and stunt man that has ever been recorded on camera. Ryo Saeba can fight, but he is famous for his shooting, and although this version had a few scenes with him and guns, really, they focused more on the fighting, as that is what Chan is good at. I did not mind this change because if they did not want him to perform cool stunts, they would not have cast him in the first place. Of course, I wish there had been more connection to the original, but I cannot be mad at this movie, because it make sense in its own way, in its own universe. It was both funny, scary at points and just full of action, which is exactly what we want from a Jackie Chan movie. The main characters were well established, their motivations and story arc was clear, and the villain just stepped out of a 007 movie, they had their back story, but they were just their to be beaten by the hero.
Watch it? I think it is a classic, when it comes to Chan movies it is a definite must watch. Again, this is a good action movie. It is a good adaptation if we consider all the nods it made to the original, but it also works without you knowing where it came from (like I didn't back then) and that proves that it stands out on its own. Most importantly, it has sooo many Easter eggs and popular culture references that I could write a dissertation about it right now. This film has something for everyone in the audience.
Until the next item on my list!
Bejegyezte: CsorEsz91 dátum: 4:49 AM