What's Next On My List? Postcards from the Edge 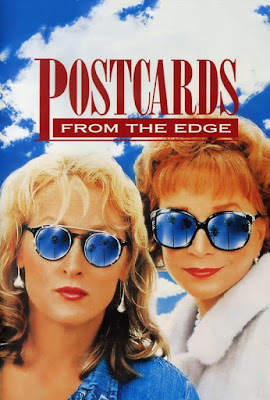 Suzanne Vale (Meryl Streep) is an actress that ends up in rehab while still young, and she is forced to move back in with her mom, Doris Mann (Shirley MacClaine) if she wants to leave the facility. As she tries to rebuild her career, she has to also work on her relationship with her mom, which might seem like a much harder challenge. 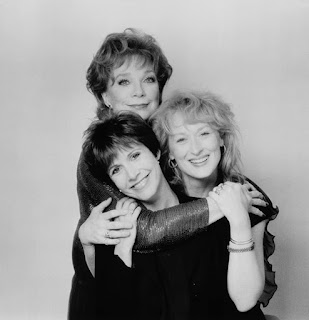 I remember that back in 2008 I was looking for movies with Meryl Streep while waiting for Mamma Mia! to come out. My mom was watching it on TV one day, I caught half of it, so I got my hands on a copy so I could watch it and it quickly became my favorite movie. On that same summer I saw an award show where Carrie Fisher spoke: she wrote the book Postcards from the Edge that the movie was based on, and then she also wrote the screenplay for this movie. The book was based on Fisher's life in many ways, and the movie highlighted the relationship with her mom instead of the rehab. The book is very well written, it is actually very raw and it was hard to read at times because of its simple and true. Very few books say things out loud the way this one did, or in any way, this felt unique. The book did not focus on Suzanne and her mom, but that was actually a good addition in the movie. Fisher said herself that a lot of the discussions in the film were actually from real life. Fisher grew up with the most famous parents of their time and there is a pressure that comes when one becomes famous at a young age themselves. Fisher was never quiet about her substance abuse problem, and after she found out about her bipolar disorder she made sure that people learn that the brain is just another organ. You see, I love her writing, and when I think about this movie I always think of all the great works she left behind. She was truly one of my favorite people.
And now about the movie in particular... what can I say? I do believe that Meryl Streep was outstanding and that Shirley MacClaine was a perfect cast to play her mom. These two had such chemistry on screen that puts others to shame nowadays. I do believe that this is one of the greatest movies ever made about two narcissists who both love and hate each other.
Watch it? The book is very different from the movie, which in this case is no problem, I feel like it adds even more to a universe that exists in Fisher's head and we are all granted access through her work. I am blessed to share this with you all because I can highly recommend both, and all of her work. In a way, Fisher lives on through Meryl Streep for me, as they were close friends and every time I see this movie I cannot help but smile. I do hope more people go back and see this movie and grow to love it as much as I do.
Until the next item on my list!
Bejegyezte: CsorEsz91 dátum: 12:21 PM