Along with a series of old favorites, I am also trying to keep up with new things coming out. I am already a year late watching this movie, but oh my, I am so happy I finally got around to it. And I highly disagree with the rating of the film so I am gonna get you all to watch it again! 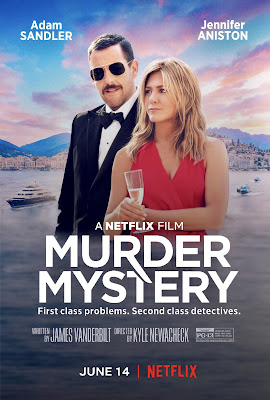 The Spitzes, Nick (Adam Sandler) and Audrey (Jennifer Aniston) travel to Europe for their honeymoon - that they forgot to celebrate 15 years earlier -, and on the plane ride over meet a fascinating man, Charles Cavendish (Luke Evans), who finds himself in the middle of a soap-opera-like love triangle, that will also define if he inherits anything from his uncle. After a series of murders the Spitzes find themselves being blamed for each victim, and they have to solve the case themselves. 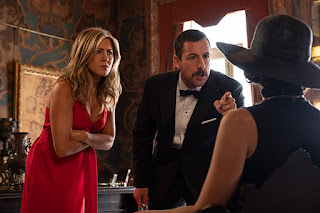 OK, right off the bet, I just love the title. Every good crime book that actually made it to world-wide fame, had either murder or mystery in its title in some way, so this is just fun. Now, the story had a great twist, the clues were there in front of us, but the movie wanted us to put it together with the main characters. And well, you might say that the detective and his wife who loves crime novels should not be able to solve this case -- but listen to yourself, he is a detective (!) --, and you see, the killer was also not a mastermind, just a bit smarter than the others involved in the crime. So next to the awesome plot and twist at the end of the story, it had a wonderful casting. You don't really know if two people will have chemistry until they are in front of the camera, and I was surprised how well this cast did and I was happy someone put them together. And the characters they played were both funny and intriguing. Yes, Aniston is a 10/10, which played to the favor of the movie, as instead of incredibly standing out in this crowd of rich people, she actually made them look like they belonged even if they were not "royalty". You understand her love for her husband and also her curiosity for something more in the world, and how that curiosity got them into this mess. The only thing that this movie lacked was MORE David Walliams! He was the most awesome character and I was so sad when he died (whoops spoiler...), so yeah, if you have him in your cast, you should make sure he gets as much screen time as possible.

Watch it? Please do. Every once in a while Adam Sandler does something that has no toilet humor and he just knocks it out of the park for me. Not to mention that I am on board with any movie he has together with Aniston. Overall, I am happy that I watched this movie much later, because I was in the right mood for it and wanted desperately to get out of my apartment, and this story got me out of my living room: I laughed a lot, I was surprised and just entertained altogether. It is definite must watch during the summer!