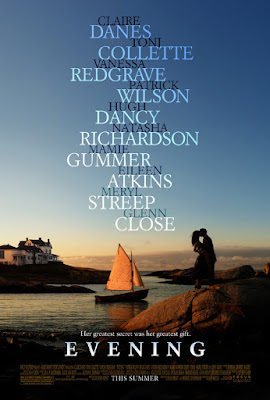 A drama exploring the romantic past and emotional present of Ann Lord (Vanessa Redgrave) and her daughters, Constance Haverford (Natasha Richardson) and Nina Mars (Toni Collette). As Ann lays dying, she remembers, and is moved to convey to her daughters, the defining moments in her life fifty years ago, when she was a young woman (Claire Danes). Harris Arden (Patrick Wilson) is the man Ann loves in the 1950s and never forgets.
— Focus Features 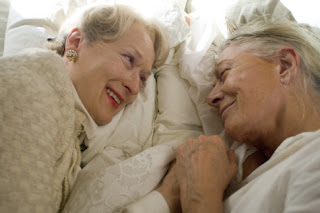 I have watched this movie almost as soon as it was available and I was blown away. I know that I am not a mother of two, with failed marriages, someone who lost the love of her life at a young age or any of those traumas that this strong woman went through in her life. Yet, somehow, that feeling of having one night of your life stay with you for forever is one that I believe in. I have had countless nights that I forgot, but then again, they did not involve the death of someone special... And I am yet to see what will come back to me on my deathbed, but there is something about the adventure that is "life"... for the daughters of Ann it might seem strange that their mother is thinking of a moment that was prior to them being born, but in fact, that might be the reason her life was shaped as it was. I also understood the struggle of her daughters, one that is happily married, and another that refuses to grow up... they were the biggest fears that Ann also had to face. These two sisters seem each other's opposite, yet they share enough to have eternal love for each other. Ann thinks of herself as a bad mother, but she gave the love she could not give to Harris to her daughters and this is just one of the hundreds of aspect and lessons that this movie teaches. Every time I re-watch it I focus on another character and to see this vibrant independent woman breaking with traditions in the 50s, unafraid of what is come... and she is just one of six incredibly well written characters who go on quite a journey in just two hours.

Watch it? I do believe that when I think of people who make Hungary proud, director Lajos Koltai is definitely up there. Rarely do I advertise where I from, because we are mostly known for terrible political decisions, but sometimes a couple of  remarkable artists make it to worldwide fame, and he is definitely one of them. This is one of those movies that has something for everyone. And well, if you see it again and again over larger periods, it is gonna give you even more!

Until the next item on my list!
Bejegyezte: CsorEsz91 dátum: 6:14 AM