As a tradition, each year in memory of Paul Walker, I review a movie that he starred in as long as I run out. I miss him terribly still... he was truly one of my favorites. This is for you, happy birthday! 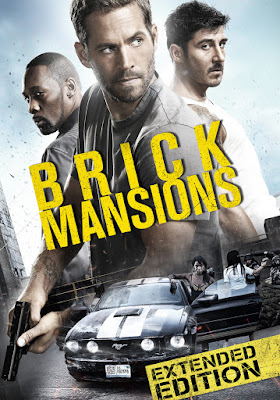 Detective Damien Collier (Paul Walker) is dispatched to the Brick Mansions district of Detroit, where he is supposed to stop a bomb and a local gangster, one that was responsible for the death of his father. Once there he is paired with a former soldier, Lino (David Belle), and although they work together to save the district, the two go against each other when the clock is counting down. 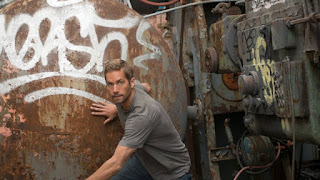 This was one of the movies I was putting off after Walker passed away, as I do not want to run off... thankfully I still have a few things to see and I also plan to rewatch a few things, because I do miss whole heartedly this charming man. When watching the movie, I remembered that a few years back I wrote a list of my favorite male actors, and I put him at the bottom, with the exact reasoning that I want to see him do more than be an undercover cop. Of course, he breaks out from that role even in the Fast & Furious franchise, but I had a good laugh that this movie cast him into that role as well. That having been said, he was quite wonderful. The strangest and best thing about Walker is that he has flawless chemistry with any other male counterpart. He is often paired with strong male actors, like Vin Diesel (F&F), Scott Caan (Into the Blue), at the same time Idris Elba and Hayden Christensen (Takers), and it was the same case here with David Belle. To me personally he is always the lead, but I have to give it to him, as in a lot of buddy-comedy like movies (and this too had a few underlying jokes) there is always one that muscles out the other, but in his movies there is always a cohesive pair that you are rooting for.
As for the movie... it was highly entertaining, a good action movie with a couple of twists. The story that the politician is the ultimate bad guy who does not give a shit about his citizens was quite on point, I can't even argue with it. It is more sad than anything else. And the gangster becoming the next man to run for office is just part of the justified absurdity of the world we live in.
Watch it? I was very pleasantly surprised. I have found some part arguable in the end, but overall I could rewatch this movie anytime. Any movie with parkour really gets be glued to the screen cause it is highly entertaining. And smart dialogue is the other.
Let as now remember this precious man with a heart a gold and a breathtaking smile. I think of his family in the days leading up to his birthday... I will always just be a fan, but I do miss him dearly.
Happy Birthday Paul!
Until the next item on my list!
Bejegyezte: CsorEsz91 dátum: 5:41 AM