HAPPY MAY THE FOURTH (BE WITH YOU)!
I finally managed to get around to playing (and finishing) this marvelous game, and it only seemed appropriate to talk about it for this years awesome Star Wars day! The series Clone Wars is coming to an end today, and I am already crying, as the last four episodes have been quite an emotional roller coaster. This game too, like most of the canon products made in the past ten years, takes from what we all love and know, and elevates it to new levels. Almost ten years ago now, but I remember when Disney bought Lucasarts and I was looking forward to smart and creative people taking a spin on this wonderful universe, other than its creator (whose focus seems to slip away and... let's not get into it). This game fell into my lap, I was not seeking it out, but my brother is a big gamer and he knows my style, and I have to say, he was on point again with exactly what I needed to survive this pandemic. So let us strap in, jump to hyperspace, and discuss one of the best Star Wars games out there: 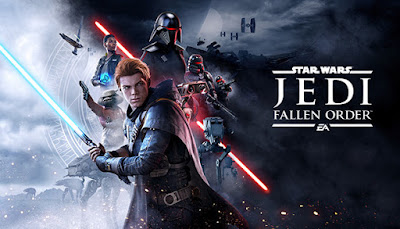 This game was a gift for Christmas, but with the world going insane, I had no time to play with it up until April. So, I turned it into a nice Easter gift instead and dived into the story. My best friend gave me some pointers before I started, and well, I saw lots of YouTube videos entitled "things I wish I knew before I started" and I have not seen any of them, but I have an idea of what they might complain about. I personally play a lot of plat-former games like this one, and I am also deeply embedded in the canon lore of the Star Wars universe, so I was just exited to get to see this story and did not worry too much about the Easter eggs of the little extra nuggets of information that others might want to warn other players about.

The story: Our main character, Cal Kestis, is a former Jedi padawan whose master was killed by the clones when Order 66 was issued by Emperor Palpatine. He is in hiding, but inquisitors are searching the galaxy for survivors of the Jedi purge, and Cal has to escape their clutches. He is rescued by a woman named Cere, who reveals herself to have been a former Jedi, and a Latero man named Greez, whose ship the Mantis takes them on their adventure. Cal has to find a way to reconnect with the Force and also to find a holocron containing the location of children who have a connection to the Force. Whether or not he succeeds is up to us gamers.

Mini-Bosses: This is the part of the game that made me both excited and pissed off as hell. The mini-bosses came out of nowhere sometimes, you are just going ahead and getting all the chests and secrets and then arrive special versions of common enemies. I liked that they were a bit harder and that they had something extra the others did not, and behind them there was always a reward waiting for me. Not to mention, that when I went back to those locations (to unlock more items) I encountered bounty hunters on the look out for me, and honestly, it was the greatest idea in the whole game. You feel like you already conquered that area, and then BAMM another mini-boss there. I forgot each time that it could happen and I loved beating them and their droid companions.
The Boss Fight: OH MY GOD. F*CK THIS GAME. The Second and the Ninth Sister were the single hardest things on this universe. Meeting the Second Sister for the second time in the Imperial Dig Site was the moment I set the game to the easiest mode because I was close to crying. Even on the easiest it took me some time (I might be a shitty gamer, I am owning it, but still). That was followed by Taron Malicos on Dathomir, where I know that Nightsister Merrin was helping me, but I still felt like throwing my controller to the screen. I won't lie, defeating all of these bosses was of course the most exhilarating feeling on the planet, and if they were easy maybe I would not have enjoyed them so much, so do not take this as a criticism from me, but more of an observation.
What didn't work? Okay, the ponchos are disgusting. I mean just why? Open any fashion magazine and you'll see that NOBODY likes to wear ponchos. I liked on average two and I could collect like a 100 different versions of them in the ugliest colors on the planet (or a galaxy far far away...). And as we all know and you have probably read it in all the reviews, the levels of difficulty in this game are fucking insane. You just... NO. There is a sense of reward if you beat things on "Jedi Knight" which is actually "easy" in this game, but it is virtually impossible at certain stages of the game. I won't lie, I have a coordination problem, so for me to include any kind of technique comes really hard, so I was happy to have a "story mode", as in a "super easy" version, because that alone made the game enjoyable. And it is extra frustrating when you really want the game to be the best time of your life! And that was my issue with the chests and the secrets and the completion... some things really were impossible to find. Your map gives you some idea, of the fact that in that give area there are only 4 chests, for example, and 1 secret to find, but there are certain parts of a level where you cannot go back if you advance too much. I know that after The Legend of Zelda: Breath of the Wild a whole new concept for open world games came about, and people love to explore but... I personally like to have a map that points me in the right direction. This again easily can go over into the category of hatred, as I have found myself looking at YouTube play-throughs, because I did want that 100%. I agree, you do not have to point it out to me on the map necessarily, but give me clues. There is only one planet where I got 97% and I refuse to go back, because my map used to signal "undiscovered" areas, which helps you to know what you haven't unlocked or which path you haven't tried out for, but it doesn't always. I might be alone with this, but with the game being so hard, having to find out after I finished it that you can actually get 10 different health canisters, let me tell you, I was really upset. Finally, the slides... in the mud or on the ice, I just ... on planet Zeffo I died 59 times on one of the ice slides and it had nothing to do with the storm-troopers and or the other enemies.
What worked? The story. I was crying along with Cal when his master Jaro Tapal died and gave him his damaged light-saber. And then we get to go to Ilum, to find Cal his own crystal for his own light-saber, something he never got to do as a young padawan. Honestly, I find that Jedi getting their crystals is the single greatest part of any narrative. I actually hate it when characters just show up with a new saber, I mean... The way I got to be in control, even if it was about Cal, I still felt in my stomach that self of accomplishment, as if all these years of struggles I too was just a step away from being knighted. This game knew exactly what I wanted, to see more of Order 66, as it was not just Obi-Wan or Anakin who had to venture through it. Not to mention the ending... if you haven't played it yet, do not read the rest of this paragraph. But when you think that you have stopped the Second Sister and have regained the holocron from the Empire, Darth Vader himself shows up and faces you, to get his hands onto the holocron and the way the game resolves the conflict of the story was simple breathtaking. I loved the ending, and I do not want to talk about it more because I want for every gamer and non gamer that liked my recounting of the story to seek out this game for themselves. 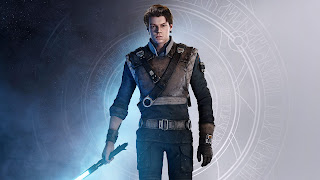 This game was a gift to the fans like me: I loved Star Wars Rebels, I love every little story that has... uhm... nothing to do with the Skywalkers... I am sorry to say, that despite loving the crap out of the original stories that opened this universe to us, I do adore every other character: Kanan Jarrus, Ahsoka Tano, Rex, Cody, Wolff, Ezra Bridger, not to mention opening the background to enemies, from the likes of Count Dooku, Asajj Ventress, and the genius of Darth Maul. And this game now presented us the heart of Cal Kestis and the hardships of Cere during and following the purge, showing us the difficulties that come with the light and the dark side of the Force.  I feel like you could take the cut scenes from this game and just watch it like an awesome Star Wars movie (it is definitely better than Episode IX...). I hope to see more of the adventures of this unlikely crew, and I can whole-heartedly recommend it to any fan of this universe. It is a must!

Until the next item on my list!
Bejegyezte: CsorEsz91 dátum: 1:16 AM