What's Next On My List? (Games) DmC: Devil May Cry

I rarely write game reviews, and the reason for that is that I also rarely play them. I am, as you might have gathered from all the comments I made so far, quite busy. However, there are a couple of franchises and movie-based games that I really want to get my hands on, and when I do, I just enjoy writing about them. The next game on my long list was from one of my favorite franchises: 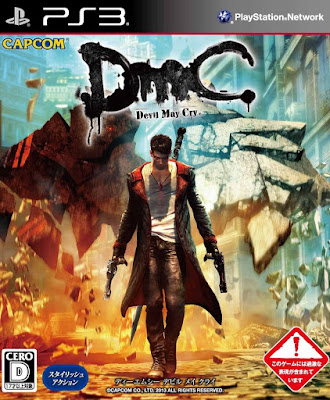 The story: Dante goes back to his roots, he is not yet the demon hunter that we know him as, and his childhood seems to be a mystery, but for some reason he is already followed by demons that want his head. Slowly we find out that him and his twin brother Vergil are the children of a demon and an angel, and as a result, they are the only threat to the power of Mundus, the most powerful demon in charge of both the limbo and the human realm. Dante works through the minions of Mundus, as he finds out that it was him who killed his parents, and with the help of his twin, he is able to defeat him and release the world of humans from his grasp.

Gameplay: I did not know what to expect, of course, and having fallen in love with Dante over the course of many games, I was pleased to learn his backstory, and see him become the white haired bad-ass human defender that he is today. The game handled beautifully, I obviously died in the dumbest of places, but that is just my inability to wait when the game requires it, but the choice of weapons was possibly my favorite thing in any game I have played ever. Not to mention, that the "game over"s were very nice to you: even if you died, you could start over from the same place without any repercussions (at least I did, but I did not die more than 3 times at once). In the event of a boss-fight, you did have to restart, but that is still very generous (considering that if you were in the position of a Gold Orb you could continue the fight right there and then). Another wonderful thing was the dialogue... I need to praise the writers of this game as rarely have I enjoyed interactions between the main characters, or cut scenes in general before this game. It is always rewarding to enable a cut scene and to be able to progress in the game, but in this game in particular each interaction was a gift to the gamer. I loved the way we progressed, the way we got to know the characters and although we now know where the complicated relationship of the brothers is headed, it was still a treat to see there before it all begun.
Mini-bosses: They were INCREDIBLY hard. First, you can see the mechanic of the smaller demons and there is a way to beat them, of course, but if some showed up at the same time (eg. the witch with any of the bigger ones), then it was just a countdown to your death... I actually died several times trying to fight off multiple little enemies, than I did with the mini-bosses. That said, the mini-bosses where indeed hard, but very rewarding. Each required a different set of skills, and I like the weapons I gained as reward.
The Boss fight: Honestly, this was the most ridiculous part of the game. I find that perhaps the game was rewarding you for getting this far, but I am used to dying at least 16 consecutive times, then cry, then curse, then die 21 more times, and then finally defeat the boss. Here, killing Mundus was way too easy. Here you can debate me and tell me that Vergil was the real boss fight, but I didn't even die when I was fighting him. Yes, why am I complaining about it not being difficult? Good question. I should be happy, and honestly, I loved that there was no way to brute force the fight with Vergil, even if you focus your upgrades on one weapon (which you should definitely NOT do!), you still had to be smart about how you defeat him. Overall, being smart about it was much better than it being way too easy. Nonetheless, each boss required a different set of skills, and because of that you reach Vergil with the knowledge you need to make the best of your arsenal, and I find that the biggest problems games have is giving you all the tools and the forgetting to force you to actually learn them. The weapons in this game would have been a waste had they all not contributed to one fight or another. My sword was the strongest, because of my upgrades, but I could use everything to my advantage, and I could NOT just beat the game with a sword. 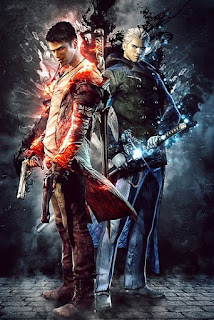 What didn't work? My only complaint would be the puzzle at the very end of the game. Although I enjoyed doing it, feeling like I suck at it and trying to look up help (which didn't help, so I still beat it on my own), I would have liked more puzzles in the game. That last one kind of came out of nowhere, and yet I like the idea of puzzles... perhaps one like this, on a smaller scale would have worked, so when I reach it I know the mechanics but still have to put in the work to solve it. But, that was truly the only thing that I found weird, no other complaint.
What worked? Everything. This is gonna be one of my favorite games of all time. I do think that the range of weapons and the upgrading system is awesome, first I unlocked everything for Dante, then I went weapon by weapon, and I really loved looking for the little elements in order to get as many points as I could. You see, in here, there are a couple of extra missions, but looking for lost souls or extra orbs was never a side quest that took you out of the game. No matter how linear the game was, there were always at least two paths you could take and the curiosity was killing me, which means that I am very likely to replay the game just to see what else I can gather and get all the upgrades possible.

I can only recommend this game. No matter when you play it in the franchise, if you start with this one, or go in order, you are bound to have a good time. During the credits we are shown scenes of behind the scenes and how the game was created. I am mesmerized by the grotesque beauty of this game. My stomach isn't very strong, yet, just because of how gorgeous this game was rendered I was not bothered at all. I love it when I can see the work put into a project, how the developers have clearly enjoyed and loved making this product, for me, the player. I truly only have good things to say about my experience and I hope everyone checks it out.

Until the next game on my list!
Bejegyezte: CsorEsz91 dátum: 9:47 AM