Just a couple of weeks ago Hulu released its adaptation of John Green's first solo novel "Looking for Alaska". I had previously read the book, not just in the anticipation of the mini-series, but because my girlfriend is a major Green Brothers fan and she introduced me to the world of nerd-fighters and made me realize I was a part of it all along. The more I got to know about these two, the more I grew interested in their works, and as so, I began Green books in order, this being the first. Now that the adaptation has come out, I wish to talk about both the book and the miniseries. 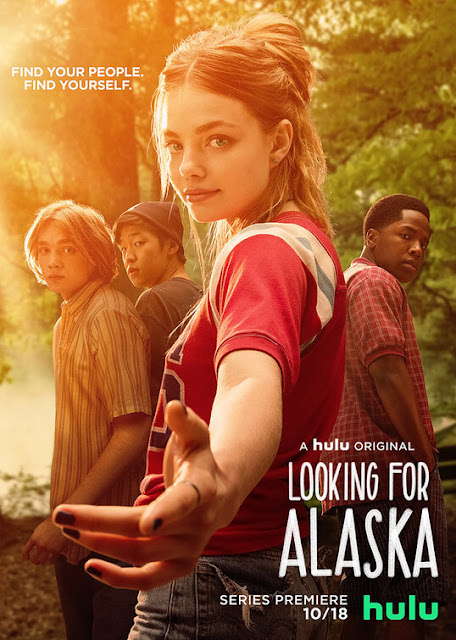 Miles Holter decides to enroll in a high school to get away from his current one, as he has no friends and does not enjoy any aspect of his teen years. Once at Culver Creek he hopes to find something bigger than himself, and he does as he immediately makes friends with his roommate, the Colonel, and his best friends, Alaska and Takumi. Alaska is a mysterious and powerful being that Miles starts to look up to, as her energy to life is something he did not know was possible. As she gets closer to his heart and he finds that the only thing that matters is having her by his side, he loses her. The story concentrates on his loss of Alaska, and how his friends deal with it as well.


"So I walked back to my room and collapsed on the bottom bunk, thinking that if people were rain, I was drizzle and she was a hurricane." 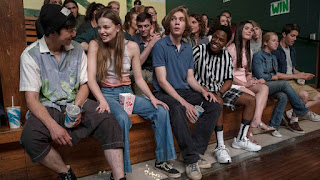 So a young Chad Micheal Murray and a young Margot Robbie fall in love... fine, it was other actors, but I know who they would have cast if it was indeed shot in 2005. That said, I was blown away by the young actors in this adaptation. The magic about Green's book is that he writes complex young characters, to me even showcasing that we do not see what is under the surface whatsoever. Even though I was a teen myself one day... but they are often misrepresented. I believe that Miles' talk with his mom, after he loses Alaska, was one of the most powerful dialogues ever written: he highlights, that he does not want to be over this, that it isn't fair, that nobody should be forgotten after they are gone. What I also liked is the adults in this adaptation. Of course, since the book was written from Miles' perspective, we do not get to see everyone or get to know at all some of the characters that do have an impact on the life of these teens. The miniseries took seriously the idea of bringing characters to life, from 2D to 3D literally. Even enemies or seemingly distant and impatient teachers revealed to be much more than meets the eye. These people have decided to take care of these children and as people devoted to their professions, it is clear that there is a story to be told there too. I loved the casting and I loved the interactions between the young and the old citizens of Culver Creek.


"We need never be hopeless because we can never be irreperably broken." 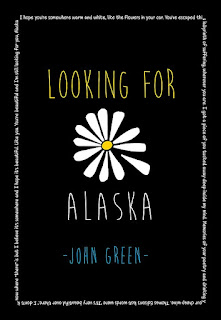 Now, I unfortunately had two issues with the book, that just did not let me enjoy the ending, and one of those was very much brought over to the adaptation, although it was made a bit better. First, when the boys are trying to find out what it could have been that triggered Alaska, it drove me insane that none of them thought of the passing of her mom, since when it was revealed it shook everyone. As she yells out that she forgot something, even if I can understand that she would much rather share the happy notion that her anniversary with Jake is on the same date (which OK, were on the same date?), I would still feel like they should have remembered or at least said "Her mom could not have died on her anniversary with Jake, could she?". On top of that, I could not believe that her father, somebody who was completely sane and composed at the funeral in the book would not mention whatsoever that both his daughter and wife died on the same day. Even more so, in the adaptation, where he was crying and drinking... That is why, me knowing that this SHOULD be the link to the question of why she ran off that night, when it did turn out to be that, it was just completely underwhelming... I do not know if I am more of attentive reader with an attention to detail (which is something people have told me) or that the reader was supposed to be in the loop at all times, but when it came to the moral lesson of we will never know, when half the book is about trying to find out why, I was not happy... but the second thing was having given us such in-depth characters, it bothered me that Miles loves this girl so much whom we don't really know anything about. The adaptation approached her portrayal from a much tender angle, making me want to hug her most of the time, which was a very smart thing to do. I might not go so far as to fall in love with her, but I sure wanted to protect her and embrace her. The mystery of who is Alaska, where she comes from and where she is going, might be part of her charm. Of course, our first love is different than all the others, I need to be more open to that, I was told; but nonetheless, I did not know enough about her to feel Miles' love for her, and that really bothered me when I read the book.


"If only we could see the endless string of consequences that result from our smallest actions. But we can't know better until knowing better is useless."

Watch it? I do believe you should. It was amazing to me that 2005 is now part of an era, that has defining music and hair cuts, that make it stand apart from the other decades. I for one did like the adaptation more, as it somewhat ironed out questions that I had, and doubts about the relationship between these children. As always, adaptations are never the same as the original, but I do not mind the changes that were made, as they gave out a coherent and beautiful story about losing someone too soon. And hey, I do recommend reading the original if you can!