I have compiled a list of movies I have seen since as long as I can remember. Now, I am going through that list and just writing down movies that I would like to talk about a little bit. These were surprises, hated movies, and some that just worked their way into my hear unexpectedly. Out of those, I have decided to write my most detailed review about this movie, because I feel that it deserves it. 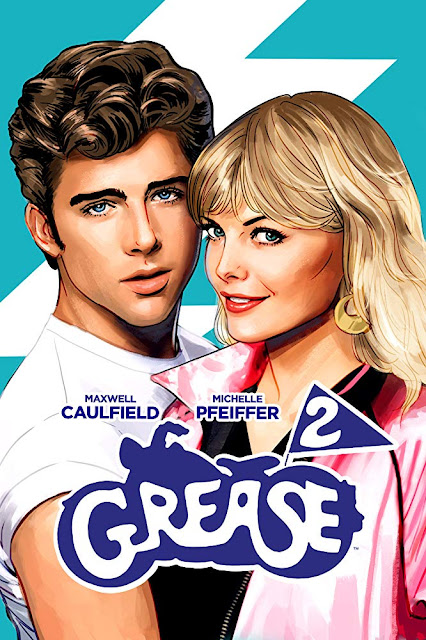 Michael comes to the same school where his cousin Sandy graduated from, and there he immediately runs into the T-Birds and the Pink Ladies. One lady in particular, Stephanie, catches his eyes, but she is looking for someone who can ride a motorcycle like no one else. Michael decides to fight for her in his own romantic way, and in the end, she falls in love with him before realizing it herself. 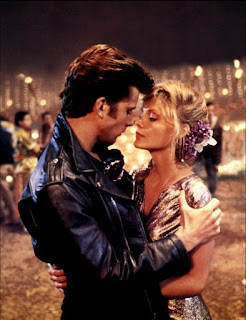 Before I tell you if I liked this movie or not, I want to write my review. First, the music: it is really good. Unfortunately there are four different songs just about having sex, which means that subtlety wasn't this movies forte, but, the songs that are not about "scoring" are simply excellent. You know, if you follow my blog, that I care for musicals, they just have a special place in my heart. And to me a good musical is measured by the songs: if I catch myself singing a song, or wanting to listen to it again, then there is value to it. I know a lot of songs by heart from this movie, so you can tell, I am very satisfied with the music. I loved it when I heard of reviews of The Fabulous Baker Boys, and people where astonished that Michelle Pfeiffer can sing, and all I gotta say is: bitch please. Second, the casting. It is actually amazing to discover this movie once you are grown up and you know the actors from it, for example, our lead Michael was my favorite asshole, from Empire Records, the one and only Rex Manning. And he is an adorable lead in this movie. Some returned from the first Grease movie, and others have since never acted in everything ever again... but that can happen quite often even today. 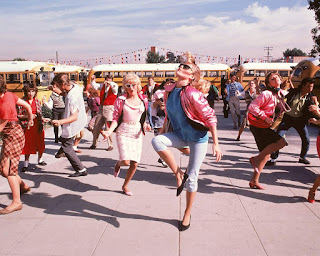 And that brings us to point three: the story. Obviously, it seems pretty straightforward, there was a gender swap, with the girl being the cool one and the guy being the nerdy kid who does not fit in just yet. On the surface, it looks like the same movie. When you look at Grease today... At least one out of five are gonna argue with you about the moral lesson of the movie, and they are not wrong... love is one thing, but these two don't really meet halfway, the woman completely suppresses herself for the other one. And yet, we all wanted to be Sandy! ... Well, I wanted to be Rizzo, but that is something that I need to deal with in private with my therapist. Here, however, simply by making the guy the little nerd who seeks to become cool for the girl he loves - instead of impressing someone he is supposed to be in love with already - I cannot find any moral questions that were dealt with in a wrong way. Stephanie clearly has feelings for Michael, he is funny, smart, and caring, but he isn't a T-Bird, he isn't a "Cool Rider", but she is not against getting to know him. When she finds out that it is him in the end, she is very happy to know that the mysterious man that has been courting her for so long is the same sweet boy. The way Michael learns to be a cool rider, and he still studies all the time, while even helping others at school, makes him someone to look up to, and you want them to get together, without either of them denying a part of themselves for the other one. That is why, in my humble opinion, Grease 2 is actually just as good as the first one. 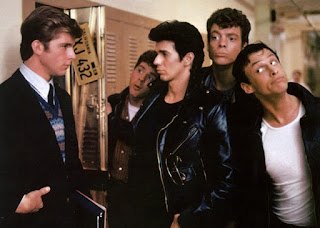 Did I think that in the beginning? Oh, of course not. The reason I kept going back to it was actually the songs, and the more debates I got into regarding Sandy's suppression of her true self in order to be liked by her boyfriend and his friends, the more I thought: this movie is stupid. Don't get me wrong, I love Grease because I have very strong nostalgia goggles on and the music still gives me shivers after all these years. But as much as we like to avoid the fact that this sequel exists, because let's face it, Grease did not need a sequel, I personally don't want to ignore its existence and do believe that it needs to be re-watched before we claim that it is a bad movie, period. Does it need that many songs on sex? No. Are any of the other side-characters likeable? The reason they make an impact, is actually the fact that they are not stereotypes. Another thing I have to note as a good writing in this movie, is that we spend a lot of time getting to know the side-characters. They have interactions that made me invested in them. The biggest change in the original movie is from the female lead leaving one cliche character to become another. Is society's pressure so unbearable? Since that is what both movies come down to, in the end, the fact that we always care about what other people think. And Danny almost got there, who knows if he would have been strong enough if Sandy had not taken steps toward reaching him sooner, but in this movie, Michael really only cares about Stephanie and what she thinks; getting approval from the others is just the cherry.

Watch it? Well, I couldn't be more detailed if I tried. I am sure I raised enough points to get you interested. Is it a flawless movie? Of course not, but no kind exists. Is it hated on a bit too much? I definitely think so. People put this movie to impossible standards and of course it did not live up to it at its time. But forcing a more modern feminist look on it, I think I lot of people should see how the heroine of this movie is actually pretty bad-ass, and someone who, after all these years, did not make questionable choices from a moral point of you. I recommend you give it a second go, and if you haven't seen it yet, the more so.