What's Next On My List? Ace Ventura: Pet Detective 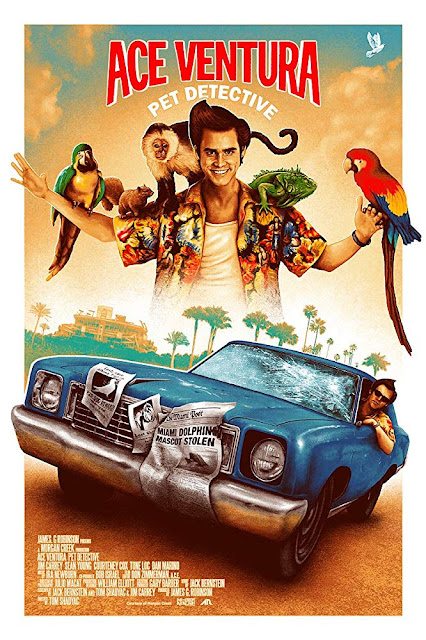 Ace Ventura is hired to find a dolphin, specifically the mascot of the Miami Dolphins. During his investigation he comes across Ray Finkle and other old players of the Miami Dolphin, among whom the former has disappeared some years ago after missing a field goal and causing his team to lose. In search of this old player, Ace finally comes across the dolphin he was sent to rescue. 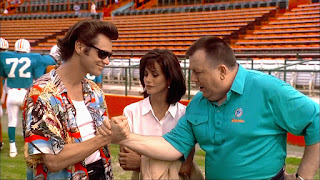 I was very little when I saw this movie, but as a result, cross dressers have never given me any problems. As a matter of fact, I even like the narrative of one trying so hard to flee their past and their demons that they don't only change their name and face but their gender as well. The only thing that hurt me really, was putting Sean Young in the role of the man who is pretending to be a woman, because she might be one of the most beautiful actresses I know. That having been said, in the role of the villain she was simply wonderful, and her interactions with Ace were quite fantastic. 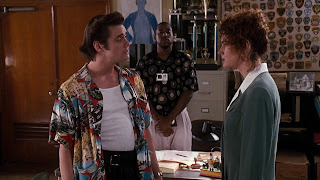 Growing up, the second Ace Ventura: When Nature Calls (1995) was actually my favorite (I was also too young to understand the clearly adult sex jokes and the now obvious references to it, which goes to show, children don't need to be protected from sexuality), because this one first movie was quite scary at points... I will never forget Ace going to house of Ray Finkle, and there is an unease over the whole scene, the pain of that football player can be felt throughout every beat of the score playing the background. And well, I am always waiting for a jump scare, even if I know it isn't coming. Not to mention when he sneaks into a shark tank by accident... that also scares the shit out of me. So overall this was a pretty serious movie, but it also had very funny moments that despite the clear childhood trauma of the serious moments in the movie, I am still taken back to it over and over again. I do believe the second one is more family friendly, despite the sexual jokes in it, and am very sad that the man himself, Jim Carrey did not thinks so... or the audience.

Watch it? People have to go and re-visit both movies and better sooner than later. This iconic character yielded several spin-offs and for good reason too, since it is, in my humble opinion, still one of the most original characters ever invented. He has the iconic Hawaiian shirts like Magnum P.I., but also the white shirt and comfortable shoes of someone who does not care about his looks overall. His peculiarity makes him unique, and his positive take on life and love for animals makes him relatable. This movie stands the trial of time.