It was a year ago that I wrote about my favorite youtube channel, Game Grumps (now with the addition of The Grumps, featuring videos other than let's plays!), and coincidentally, it is also exactly 10 years since Ninja Sex Party posted their first video ever, "I Just Wanna Dance". The reason we are here, is because I had the pleasure to see them live for the first time in my life and I just had to write about it! 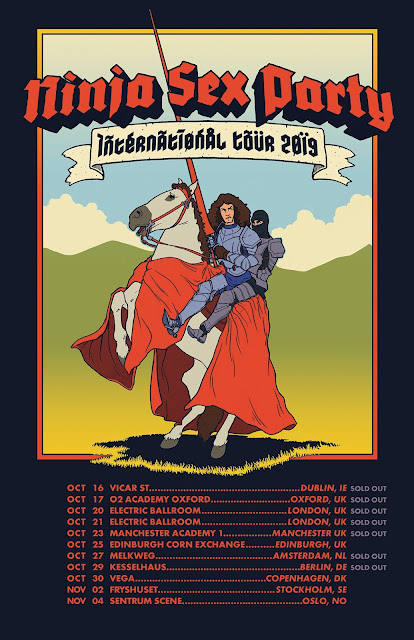 A few months ago, in a separate video, Danny Sexbang (Daniel Avidan) and Ninja Brian (Brian Wecht) hinted at the fact that they would not have concerts in America in 2019 anymore, aside from their 10 year anniversary arena show, *wink wink, meaning that they have things scheduled elsewhere. Seeing that they already had a tour in Australia, I knew that Europe had to be next, and sure enough, they came finally as close to me as they could! The minute the announcement came of a European tour, I put my money aside and waited for the locations, seeing London my eyes lit up "I can go there!" [from Hungary], I yelled out and immediately bought tickets for a concert in Camden Town that ended up being sold out in a matter of days. Then the count down begun for October 20th...

The openers...
A small band called Planet Booty opened for NSP, singing three songs with one very important message: self-love. All these bands actually emphasize how you should face yourself in the mirror and learn to love yourself because you are just wonderful the way you are. I am not sure how long they have been opening for NSP, but they just seemed so humble and happy to be here with them that it made me love them even more than I could have imagined. They have catchy songs and truly beautiful voices for people who sing about booty and asking people to take their pants off. I also loved that their songs were not just for the ladies, or the men, but everyone in between with the emphasis on it being "consensual". The room went insane when they sang that part of the song! I cannot for the life of me think of any other band singing about sex and love making that emphasizes that it has to be consensual... so that alone makes them my new favorites!


... a TWRP concert...
What followed were forty minutes of the Tupperware Remix Party, who are simply breathtaking on stage. However, I was not pleased... the band members, Doctor Sung, Lord Phobos, Havve Hogan, and Commander Meouch are probably among my favorite musicians of the 21st century, with songs that beat Daft Punk in my humble opinion, but... the microphone was terribly calibrated. Every time anything in the background started to play, a new song was being prepared e.g., for Doctor Sung to take the lead, I could not hear a single thing he was saying. He has this peculiar way of talking that reminds of me of the terrible English dubbing they used to have over Japanese movies, which is very fast with strange pauses for air and I got lost sooooo fast... which made me particularly sad, because he had great jokes and the message of self-love was not lost on them either. I love this band and they have wonderful stage presence, a lot of which was lost thanks to the mic not being set up properly. The one thing that they did do, that made me enraged, was playing "No Pants Dance", which features Danny Avidan, WITHOUT him coming out and singing it... what was the point of that? He was right backstage! I kept waiting for this to be his entrance, which would have been also awesome, since they sang all other songs they have collaborated on once they were on stage. I just do not agree with the set-list. It was not at all what I expected it to be, and that might not be a could argument, I realize, but some decisions did not make sense to me. Maybe they did not want to overshadow TWRP once onstage, but as much as I love them, and am thankful that they work together with my favorite comedy band of all time, I just felt an incredible imbalance, which could have been fixed with my ticket saying "NSP AND TWRP concert".

... followed by Ninja Sex Party
It has been some nine years since I have been a fan of this band. I got to know them through Arin Hanson, as my brother followed Egoraptor previously, and he made their video "Dinosaur Laser Fight", (which they also sang at the concert in an acoustic way). So Danny and Brian finally came on stage and they sang songs about "Unicorn Wizard"s, about fighting bullying through the help of "Cool Patrol", and what their songs about sex have been leading to all along: the real "Heart Boner" to end an era of awesomeness (for now). They also sang a cover song, as they have two albums and a third one coming out (but I would have liked more of that too); which gave Ninja Brian the chance to misbehave on stage and his interactions with Danny were perfectly in sync with the two characters we got to know and love through their music videos. It was amazing, to experience in front of them the same kind of excited butterflies in my stomach I have every time I see them upload a new music video! They came out, "We are Ninja Sex Party!", the crowd went wild, Danny's parents and Jacksepticeye up on the balcony, a room full of fans from literally around the world, a line that went around the block before we could head into the building... I was in awe.
Overall, I wanted to see a Ninja Sex Party concert, and I feel like I did not get enough of them... I do not know what the contract is between them and TWRP, and I know that Danny loves that they have a live band behind them to sing their songs, and working on the Under the Covers albums gives them a chance to have just that, but it was not nearly enough. It was two and half hours, out of which just one hour was with NSP. But am I really complaining? Oh, fuck no. I cannot believe for the life of me, that after sticking with these boys for all these years, a simple youtube band starting out when youtube was NOTHING, was able to grow so big and travel near enough for me to be able to say that I have seen them live! Because of that I have to thank all the other fans too, I alone could not have done it, of course, but I will be there to like every video and buy every single album as long as they make them. I still wish to see Starbomb live too, which I find would be closer to my expectations. But it was all money well spent, and this is just a review, and the world will keep going on even if I share some thoughts of disapproval.


I still cannot believe that I saw them live, and I hope that this feeling never fades away. I also wish to be there at the 20th year anniversary concert and many more. I wish to take my brother and sister too, who are huge fans, and my girlfriend, who lets me educate her in the ways of NSP ever since we started dating. I wish to be able to use words to express how much I love this band and their music, and I wish contribute to their success whenever I can and when I can. Thank you for all these years of awesome, keep on rocking!

Happy 10th Anniversary,
With all my heart,
a Hungarian lovely
_ _ _

Follow these awesome people on any of the links below:

There is a reason, however, why I might have been so sassy about my experience... and that is because the Electric Ballroom in Camden Town can go suck my d*ck. Before getting in, they checked my bag, which is fine, I get that, but the dude then got my empty water bottle (which I emptied just at the entrance in order to be able to take it inside) and he just threw it out! Like what the f*ck, I thought, OK, they want me to spend money in here, don't trink water from tap, OK, I am not cool with that whatsoever (not to mention that I am not from London, I was a tourist and money was an issue on my trip, and now I had to buy ANOTHER plastic bottle (which I already hated to do), for this a**hole to just throw it out at the entrance? And only THEN I saw, at the end of the concert, that the bar had PRE-PREPARED cups of PLASTIC filled with FREE tap water on the counter for everyone to take... WHAT?! What was the point of throwing out my bottle if they are fine with us taking the previous free water anyway? AND DO THEY KNOW HOW MUCH WASTE it is to have all of those plastic cups thrown out afterwards? I was literally disgusted.
All of this on top of the fact that gigsandtours.com failed to deliver my tickets to Hungary, which is beyond me, and told me that I would find them there at the sight. I went to the ticket office, the girl had my name OK, but instead of a ticket she gave me a small green paper at the size of a pen cap, that said "adult", and that was my only way in, and the guy took it from me right away. No ticket. NO EFFING TICKET. This was my dream concert and I have NOTHING to show for it! I cannot believe this, if they had already f*cking printed a ticket out for my delivery why was it not there?!! Thankfully I could ask a girl to take a picture of hers, so I have a bootleg version, but I was enraged. This place was just terrible and I will try my best to avoid buying ticket through them.
Bejegyezte: CsorEsz91 dátum: 10:06 AM