One of these evenings I was looking to watch something simple and just lighthearted to have a little bit of fun. When the trailer came out I was very unsure about this movie, I figured it would be just terrible. And I was both wrong and right... 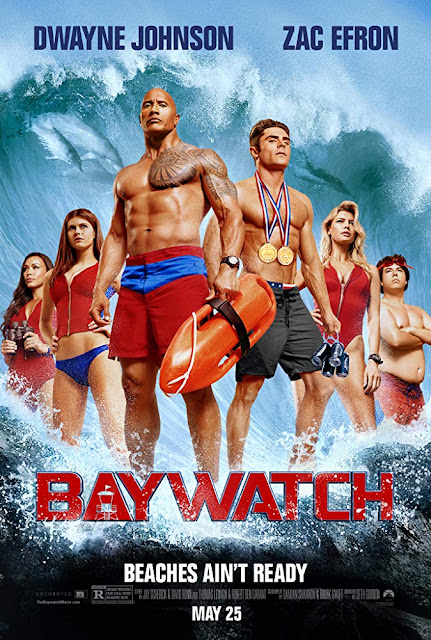 Mitch Buchannon is about to recruit a new group of lifeguards to his bay, only to notice some illegal activity going on at the clubs surrounding the beach. Instead of waiting for the police, like a normal person would, he decides to give out justice in his own way, using his team and recruits they uncover a drug dealer poising the bay. 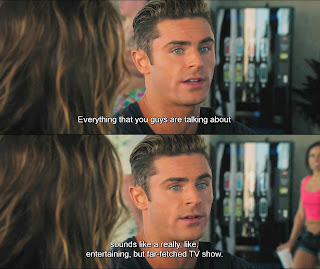 Well... I am glad I did not see this movie right away, because I would not have been happy with it. Watching it now... it was exactly what I needed, but I also saw right away why this movie flopped. I believe there was one writer out there who wanted to make a movie that was aware of itself: making fun of all those stories in the original Baywatch series that made our eyebrows go up and question "Is this right?", while still giving a nod to the actors who portrayed those iconic roles. The movie knew its source material and it shows on multiple levels. And... had they kept it there, it would have been my favorite comedy of all time, because there is plenty of material to make fun of in the original series. I loved it in the movie when Mitch sees a child getting into the water behind his back, that they pretend his lieutenant status means anything, his flip flops... even the casting was just outstanding for this movie. But then... then some producer came in and told them to add toilet humor and that is where I am sure they lost a good chunk of their viewers. You see... I do not think people expected that, and well, to sell well, they wanted to pander to the widest audience possible, even people who might not know Baywatch and... everybody knows Baywatch. It has been my experience that movies that combine high humor with toilet humor always fall flat... I have found myself laughing at loud at a lot of the jokes and it was just overall good but it would still be a good movie if I cut out all the unnecessary disgusting jokes and it would have reached the same amount of people, in my opinion.

Watch it? Well, if you are looking for harmless fun and beautiful beaches, then yes. But be ready... puke is not the only thing happening here. And to me, on a better day, that would be a complete throw off. It is simply disgusting, I mean, the situations in the movie were not even relatable... nobody ever blew up a human being in front of me, or did I get stuck in a morgue... like no. And it is a real shame, because the good jokes were home runs. So I think everyone should decide for themselves.