For years now I have avoided the Sziget Festival, despite it being organized in my city, mostly because 1, I did not appreciate during my teens live music as I do now ; 2, I am not spontaneous enough... When my friends told me stories, I would only heard the bad things, and well, that is my fault. But I grew up in a household where it is easy to hide behind fear, especially if we think that fear was justified by one news article... so here we are, hearing "horror" stories of how there are too many people, how getting of the island was problematic, drunk teens left and right, storms, mud everywhere... I just put it off. 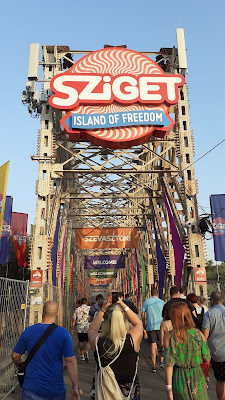 Years passed and my love for music grew deeper and deeper. So much so, that I have made a list of bands and singers that I just have to see live at least once in my life. One of these was The 1975, who have been touring around Europe for years, with three albums out in just six years, and they finally returned to Hungary. But I have written about them in detail a few weeks back, and you can read that here! So going back... when I saw the line up, I just knew that I had to buy the tickets. Never again will I pass up an opportunity like this, if I have the money for it. And that meant losing my Sziget virginity...

The thing that I never thought about, although I should have, was that I have very smart and intelligent friends who loved Sziget and maybe, instead of an article about the problems, I should have focused on the good things they told me about. I don't want to make excuses, really, I was just uninterested for the most part. I don't really drink when I go to concerts, I like to be sober, to take in every second, remember every moment and enjoy every beat. Being among drunk, well, hippies, was not on my bucket list... but I finally went and was somewhat... mesmerized.

Now, I keep reading about Woodstock...
It appears in movies, TV shows, just the other day I saw an article entitled "50 Years After They Met at Woodstock, Couple Finally Finds a Photo of Their First Hours Together", it is a part of history that will remain with us forever. And first, I had this sense of sadness, because I felt that I will never experience something like that, but then, it also made me happy how music brought people together in a way that made its mark in the history books. And when we arrived at Sziget I was without words, as if, I was able to travel back in time to a place where the problems of the world are left outside. OK. To be fair, one guy tried to air-hump me and like, honestly dude, f*ck you, but jerks exist everywhere and since they sell alcohol it was somewhat expected too, but I felt that that was just a reality check in case I forgot that I am still alive and that I did not travel in time.
Nonetheless, the way music brings people together amazes me. First, everyone was wearing clothing that even a casual Friday would disagree with: from the shortest shorts, to the big full body kangaroo onesie. And then, the glitter... so much freaking glitter! Some very well placed, along with the sparkly make up, and some just everywhere on the body. I believe that the guys who had glitter on their chest hair were my favorite kind of people. The theme that got closest to my heart was the emphasis on diversity. The whole island has the theme of freedom, from war, work, hatred, reality... everything that today makes our world bad again. CocaCola signs saying #LoveIsLove, couples being free and there was (for many consecutive years now) a tent from BudapestPride where you could marry your loved one, whatever their gender. I do believe that a lot of artists are voicing their opinions on how equality is key, and for Sziget it is very smart to enhance that message, helping their guests and just being good hosts in a world that tries to promote hate. One of my favorite moments of the two days I attended was when I tried to take a picture with a huge Sziget sign, and this random girl showed up and just hugged me, photo-bombing my pic, but I could not stop laughing. This kind of love of one another is the one that we should all promote...

... and the bands I saw did promote love. 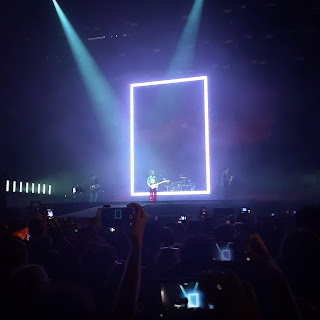 As I said before, the first band I watched was The 1975, who have just gotten in trouble for fighting the ban on homosexuality in the United Arab Emirates. But they are not shy on political issues. I find that nowadays very few songs focus on current political situations. I was just at a peace march a few days back and all the songs they played were from the 90s... and of course, we had very good times, but they are shit now... This band is not shy when it comes to expressing their opinions. Matt Healy, the singer, said "I hate guns", and then proceeded to dedicate their song "Be My Mistake" to the United States... I find that to be a very powerful message already. Their song "Love It If We Made It" is also a nice nod to the disgusting filth going on in the political sphere of the planet as of right now. During one song he asked the audience to embrace their loved ones, girlfriends or boyfriends, and just sway with them to the melody of "Couldn't Be More In Love". I have been waiting six years to see this band live and it was everything I dreamed of. They are wonderful performers and they got the crowd dancing and singing with them, featuring songs from all three of their albums. I was blessed to have seen them, and I plan to go every time they come anywhere near me again. They are simply my favorite band of all time. 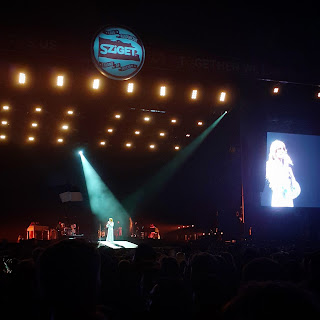 And the promotion of love and peace was overall the main message of Woodstock as well, so in that fashion, the second concert that I went to hit all the right notes again: Florence + The Machine. The other day I realized that I had been with this band for over ten years, not having realized that their first album came out in 2009. I heard their song "Cosmic Love" in the show One Tree Hill, and I did not really take into account how many years have passed since... I became legal that year, and it was actually this silly drama for teenagers that taught me to value music more in my life. Florence, stepping out barefoot onto the stage and dancing her way through the whole concert, dedicated this very song to us, the fans who have been here since the beginning, saying it was the first they wrote, while very hungover. I felt blessed to be part of their fan community, and blessed is the right word: Florence went down to the audience and chose one person to whom she directed "What Kind Of Man" and the guy was simply in trans. What we saw on the big screens in those three minutes was worthy of a thousand hours in church. She took the audience with her on a trip and we all felt every note of that song flow deep within us. She spoke one more time before that, and told us to tell the person we came with that we love them and then to turn to strangers and do the same. Finally, she dedicated their song "You've Got The Love" to the LGBTQ+ community, telling as that "We love you and we are with you". I still cannot understand how I was lucky enough to take part in this experience.

Final thought...
What this island now represents to me is simply the notion of being present. The fact that I experienced all of these moments live is something fascinating to me. I, for one, will never forget that Richard Ashcroft when on and he closed his set by singing "Bitter Sweet Symphony", a song I have known for 20 years, 2/3 of my life, and there I was, hearing it live and I felt tears come to my eyes. I think that for too long I was focusing on the how of the organisation of these concerts, instead of the fact that I would hear my favorite artist live. That is the major change in me when it comes to concerts now: being there in the moment is much more important to me, then just hearing a song on my MP3. Now, my list of artists I wish to see live is not that long, but I got at least two more crossed out and that alone made even the weird and unwanted moments of the Sziget experience worth it!
Bejegyezte: CsorEsz91 dátum: 2:00 AM