We had a VHS tape of this movie and growing up I think I watched it at least once a month. I just want to be writing about things that I love lately, even if others do not agree. Maybe this will change your mind! 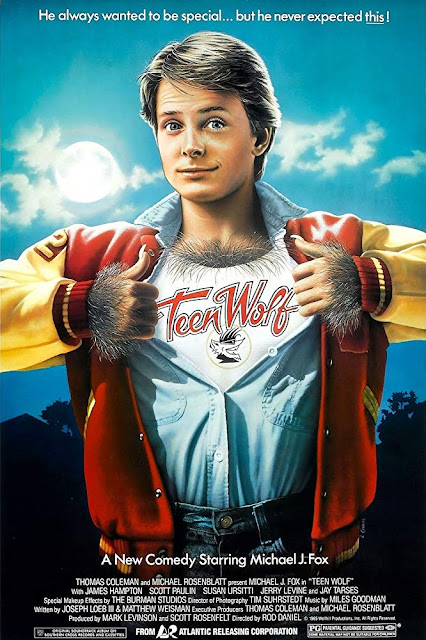 Scott is in a hard place, he is not excelling at school and his basketball team keeps losing. After a series of weird incidents, Scott goes home to find out that he is going through a lot more than just puberty. He turns into a werewolf, and his father greets him as one as well, telling him that this curse has been in their family for generations. Scott breaks out in one of his basketball games and he is first received with fear by many, but with admiration by some others. The fame of the wolf changes him, but his closest friends remind him that he does not need the wolf to be more, he already is. 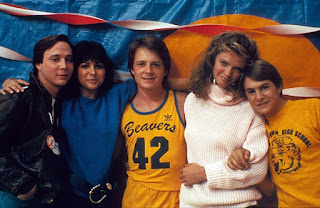 Years later the CW remade it into a TV show  with the same title, Teen Wolf (2011), that I have never seen. I was told it was good, but the reason I never got around to it, is because this movie now has a reputation for being cheesy and stupid and I am not really on board with that... first of all, yes, I might have nostalgia goggles on, but if the concept of a movie was able to yield 6 seasons of one of the most watched shows after 2010, then maybe it isn't that stupid... Second, this movie might have the best soundtrack of any 80's  movie ever made. I waited for years, and it actually wasn't until Youtube that I finally got around to finding all the songs. And I will share the best one with you! Finally, I just love the casting in this movie. They cast the nerd, the cool one, the cheerleader, the jock, everyone so perfectly, the onscreen chemistry was off the hook; and Michael J. Fox was such a good actor, that when it came around to Back To The Future, they re-started shooting with him and worked around his schedule to make sure he could be the lead. There is a lot of trivia around this movie that is fun to investigate, I would invite everyone to do so!

Watch it? I do think people don't understand the underlying message: it is a coming of age story. It is based in fantasy, but most movies are. To me the fact that the TV show was such a success shows that this movie was ahead of its time. We now love vampires and werewolves and all kinds of monsters that appear in our otherwise very boring reality. I still adore this movie, the soundtrack will stay with me forever. I do recommend it if you wish to know what kind of awesome movies give inspiration to Hollywood producers today.