I love musicals. Many people don't. Which means that a lot relies on the movie adaptations, which if fail, Hollywood leaves out several years before making another musical movie, which leads me restless and sad. Thankfully lately they have been on a roll, especially some that are made directly for movies (and are as such better made than some transformed from stage like Les Mis...). The reason I love movie musicals so much is because I know that there are some musicals that I will NEVER see on Broadway and I will NEVER see on London's West-end. But there is something magical about movies, the big screen, and if it is in the right hands, you have the same kind of magic as you would have listening to those majestic songs live. Theaters are mostly against recordings of the stage performances, which I find to be equally important, and not the cause for less people going to theaters lately. And again, if recorded/directed by the right professional, the stage performance is the best thing someone who will never see the big shows can ask for. In 1998 Cats already had one of these performances, it is one of our family favorites, and we watch it every year around the Christmas season. So we thought, if that is the base of the movie, how could we NOT be excited about it coming to the big screen?

And I don't understand how it happened.


What is that? What am I looking at? Is it the worst Halloween costume ever made? When I put on cat ears I am more believable, seriously. What is the point of CGI here? What incredible technological revolution are they trying to sell me? Because 1, I ain't buying, and 2, would rather ask them to go back in time and decide not to do this. Why aren't they in real make up, like the cats in the stage musical? Why couldn't they even try to imitate cat noses? Why is there NO effort to hide their human characteristics? And when posing this question I realized: it was more important to showcase how many famous people are in this movie than to actually disguise them AS THE ANIMAL THAT THE WHOLE MUSICAL IS NAMED AFTER.

I have come to the point where I think that the weirdly moving animatronic cat from the original Sabrina, the Teenage Witch (1996) is well made. Look at it. Just look. It's terrible. And it got slightly better with each season, as at first it looked like something a truck had ran over, not to mention, that it was OBVIOUS when they cut to an actual cat. It sometimes ran left and right, or the aunts would pick him up and they would still dub a voice over him, while the cat was NOT into being held by anyone at any point during the shooting. It was just funny, a puppet, a stupid badly made puppet, animatronic even at some point, I am sure, thus the change from season to season, but it served its purpose: it looked like a f*cking talking cat.

Hell, even this complete and utter nightmare is more cat like: 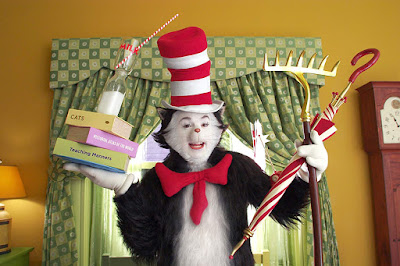 This performance by Mike Myers in The Cat In The Hat from 2003 received 3,9 rating on imdb, and I can tell you that even if the plot is beyond stupid, looking at it now, the cat is clearly not the worst part of that movie.

And I don't want to bring up well made cat costumes, I want to point at how, the BAD ones are SUPERIOR to the mess that this movie is. Not to mention the casting, WHY is the male cat, who has fathered hundreds of cats now a woman? And I AM a woman, not a misogynist, I can complain, because the lyrics just don't make sense no more! The only new thing about this movie is the fact that they are truly cat sized in our world and seeing just those two minutes... I could not care less.

Because you know what also looks better than this? THE ACTUAL CATS MUSICAL THAT WAS TAPED BACK IN 1998!


Even at the risk of never getting a Wicked movie (which some 5 years later after its first announcement still has no cast...), and with the risk of people getting too critical with musicals again, I am advising everyone to stay the f*ck away from this mess, because I am done with CGI, with green screens, with whatever technology, when I know that there are perfectly skilled and award winning make up artists out there that should be doing this. Look at this musical, these are not actors in suits, these are cats, believable cats and well... if you ever wondered what Judi Dench or Jennifer Hudson would look like in a fur coat, now you know. Yey.