I have been thinking about writing about this movie for a while now. I finally decided to cover it because I see a resurgence of movies and TV shows based on real life events in the streaming era of Netflix and Hulu, and they seem to be getting more popularity than ever before. And as such it is a good idea to go back to this gem. 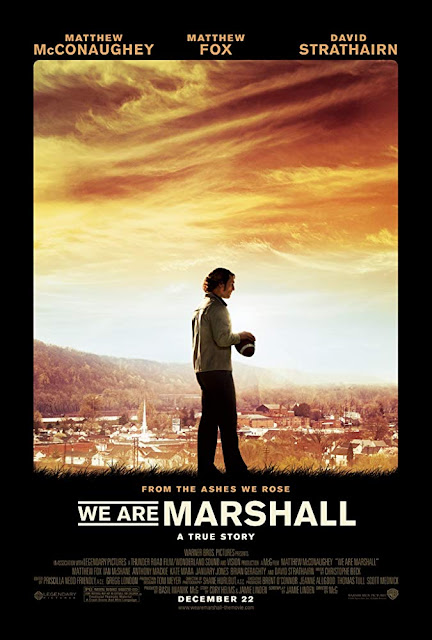 The winning football team of Marshall University suffers a terrible plane accident and all the players die in the crash. Only the assisting coach and some of the players currently on the bench remain, but one outsider, one coach, still sees the chance to make this school great again. He sees that this university still encompasses the spirit of that team, and football Sundays are the only way for people to respectfully move forward with their lives: by honoring that team every chance they get. 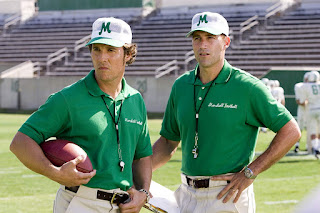 I got a hold of this movie because of Matthew Fox, and quite frankly, I would have given him a lot more screen time, as his scenes with actual dialogues were not in majority. Which was a shame, because he had wonderful interactions with McConaughey, and their on-screen chemistry was spot-on. Turning over, the lead himself was outstanding: before this I had seen several movies of McConaughey, but up to today this is my favorite. The movie encompasses a very important lesson: grief has no expiration date and nobody faces it the same way. This outsider, this coach comes in, and the way he forces football onto some makes those still in pain seem like he is disrespecting them. But actually, I do believe he teaches them that for some life has to go on. Nobody holding onto a ledge can make it long without falling. What this coach's approach has taught me is that there are more ways to respect those who passed than just sitting in silence. Some might have disagreed, but the love he brought to his job was simply indisputable.

Watch it? I find that this movie somehow fell between the cracks and many did not see it. This tragedy was one of the worst things that ever happened, and yet it is not the only one.This movie wished to tell this story to showcase how some are never forgotten, and that we all deal with grief differently. Because this tragedy is not unique - we have had more bush crashes, plane crashes and deaths of young hopeful people than I would like to admit. But as such, we have to go on... some things in life we will never get over, but there is hope in helping each other through it. And this movie in particular tries to convey that important message.