After hearing about the shooting in Aurora, Illinois, the first image that popped into my head was of Wayne telling me where he is from and where the movie about him and his best friend Garth takes place. Now, I resent America for its gun laws. And I could go into an hour long discussion as to why that is, but instead, I'll just say that they should be ashamed of themselves for feeling that they are better than others when hiding behind the 2nd amendment is so popular...

Moving on from that thought, I have loved and adored these two movies since I can remember, so even if it was a tragic event that reminded me of them, I do wish to write a short but intense review, wishing to bring it to the attention of everyone, who might not know it but definitely should! 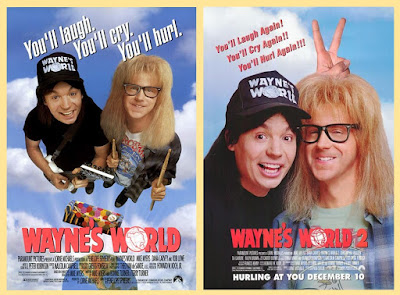 Two best friends, Wayne and Garth, are the stars of Wayne's World, a cable show where they rate movies and music. In order to promote themselves and enjoy the best the music industry has to offer, they attend concerts all around, which brings into their life Cassandra, who becomes Wayne's girlfriend. Her quick rise to fame causes some tensions, but ultimately, the kind side of these two adorable idiots saves both Wayne and Cassandra's relationship, and her career. In the second movie, we have similar tensions, except that Wayne has a larger task at hand, as he is visited by the spirit of Jim Morrison, which tells him to put on a big concert. 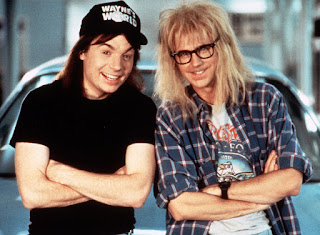 Wayne's World was originally a Saturday Night Live sketch, which I found out only years later. SNL still has characters that gain enough following to try and turn them into movies. I find that these two are the prime example of why they shouldn't stop with that practice! (The other is Superstar, starring Molly Shannon as Mary Katherine Gallagher! That movie is super funny.) Now, what I love about these movies, is that they are self-aware. Wayne and Garth continuously break the fourth wall, and highlight the weird montage scenes, or the movie clichés that they themselves decide to use to move the story forward. What I also love is that these two best friends have their separate lives too. They might seem like dummies, but Wayne's relationship with Cassandra is very mature, and well, I can't blame Garth for thinking about eating candy all the time, because he still does his part when assigned any job. 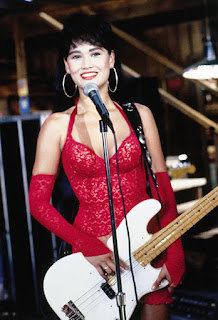 The movie highlights great music of its decade, highlights how Wayne and Garth care for that music, and also why it is so important to them. I have to admit that this movie had a great impact on me. I was already a bit older when I watched it, giving it 100% of my attention, and well, it taught me why live music is so great. It helped me go out there and listen to music, sometimes playing in the background too, and not ignore it. My best friend had a band, and every concert I rejoiced to hear them live. There is something wonderful about sharing that experience with everyone else. Yes, admittedly, we all prefer smaller concerts, in our ears, where no one can disturb us as we listen to our favorite songs, but the live version is something that has to be experienced too. And besides this great message... the movies are just effing funny! There is both physical comedy, and puns, and great classic movie parodies, I just... I don't even know where to start to list all the jokes I laugh out loud at every single time I watch them! And I do watch them a lot, as the fall season after summer when we are waiting for Halloween, my sister and I always put on the DVDs and just have the time of our lives over and over again. And they feature music from Queen, Black Sabbath, Jimi Hendrix, Alice Cooper, Aerosmith, Red Hot Chili Peppers, and great covers by Tia Carrere.


Watch them? Please do. I believe the 90s was far greater at making sequels, that Americans might not have loved, but the international audience definitely did. I can think of at least 10 sequels that are better than the originals just on the top of my head. These two movies work so well together, giving you more of exactly what you wanted: great interactions, more jokes, more music!