FRESH FROM THE THEATER: Captain Marvel

I thought I already had a favorite, and I did not think that they could make a movie that I would love more than anything I have seen from this universe so far. But it happened. This is now going to be my f*cking favorite Marvel movie of all time.

Vers, resident of planet Kree, finds herself on planet C-53, also known as Earth, where she faces her planet's mortal enemy, the Skulls. She finds out that perhaps she is on the wrong side of a never ending war, and that she has a past with terrans that is worth uncovering.

Before I head it to why I really liked this movie, I need to mention Wonder Woman for a second. You might argue, that DC decided to go and make an all female superhero movie before Marvel did, and although you are technically right, let me ask you, do you know Captain Marvel? And this is the main difference: although we were all happy that WW was not a sexist movie exploiting the famous bathing-suit like dress of the original comic book, she is still one of the most famous comic book characters ever written. The fact that DC went with her was still a safer bet, then how Marvel decided to give a separate movie to a mostly unknown hero outside of the comic book reader community. Nonetheless, taking these two movies into account, we now have two awesome all female superhero movies that can lead the way to other awesome movies showcasing that not only do we want them but we need them.

So now, heading into this movie: I loved her interaction with everyone; I loved how there was no love story whatsoever; how the villains were not apparent but once discovered, where beaten in a complete different way then expected from action movies (moral and just victories all around!). What I loved more than anything is that she had fun! My partner said it, if someone had these powers they would have fun with it, and she did. The very simple but effing important message of the movie was that even if beaten down, girls always get up and keep on going. Carol Danvers did not let anyone beat her down on her planet before, so it makes sense, that she won't let anyone do it in the whole universe. And doing the right thing isn't something that is shoved in your face, nor does she make big speeches: she has a choice and she acts according to her moral code. Honestly, I was happy that we did not have to listen to a talk on responsibility and great powers... she has it, she'll make it work.

The movie had that subtle but terrific sense of humor that we want from the MCU. Not just that, but her on screen chemistry with Nick Fury, who never, ever, questioned the powerful women around him, was just outstanding. The screenwriter deserves all the praise in the world. And on that note, we did get some insight on where Fury came up with his plans and initiatives, but what I loved about him, is that in the beginning he was a beginner cop like everyone else - he wasn't born with the eye-patch. And his faith in Maria Hill was somewhat justified even more. Being finally shown as a team player himself, it is no wonder he wished to coach other heroes. 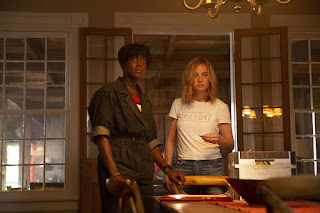 I mean really, when you think about his character, he would be one of those stuck up executives who doesn't believe in 'heroes', but this movie gives you the insight you always wished for to understand his character.
Finally, and most importantly, every single female character in this movie was just wonderful. The story was devoted to the women pilots in the U.S. Air Force, and they deserve every inch of praise. I can say that they were portrayed with respect and care. One of the major reasons for that is that there were no shots of Captain Marvel's ass, or her boobs, or any kind of sexy poses she could be forced into to, pretending that the audience still needs it... I hope this movie will lead way to other awesome female hero movies, as stated above as well.

Watch it? Please do. This movie is wonderful. It has a great 90s soundtrack - as it is when the story is situated - and it is all songs from my childhood, and I felt alive and part of the story more than I have in other MCU movies. I can't wait to see it again! And see Captain Marvel in Endgame.


And as the beginning of the movie said too, thank you Stan.